Did the Flynn-Associated IP3 Presentation Anticipate the Saudi Orb? 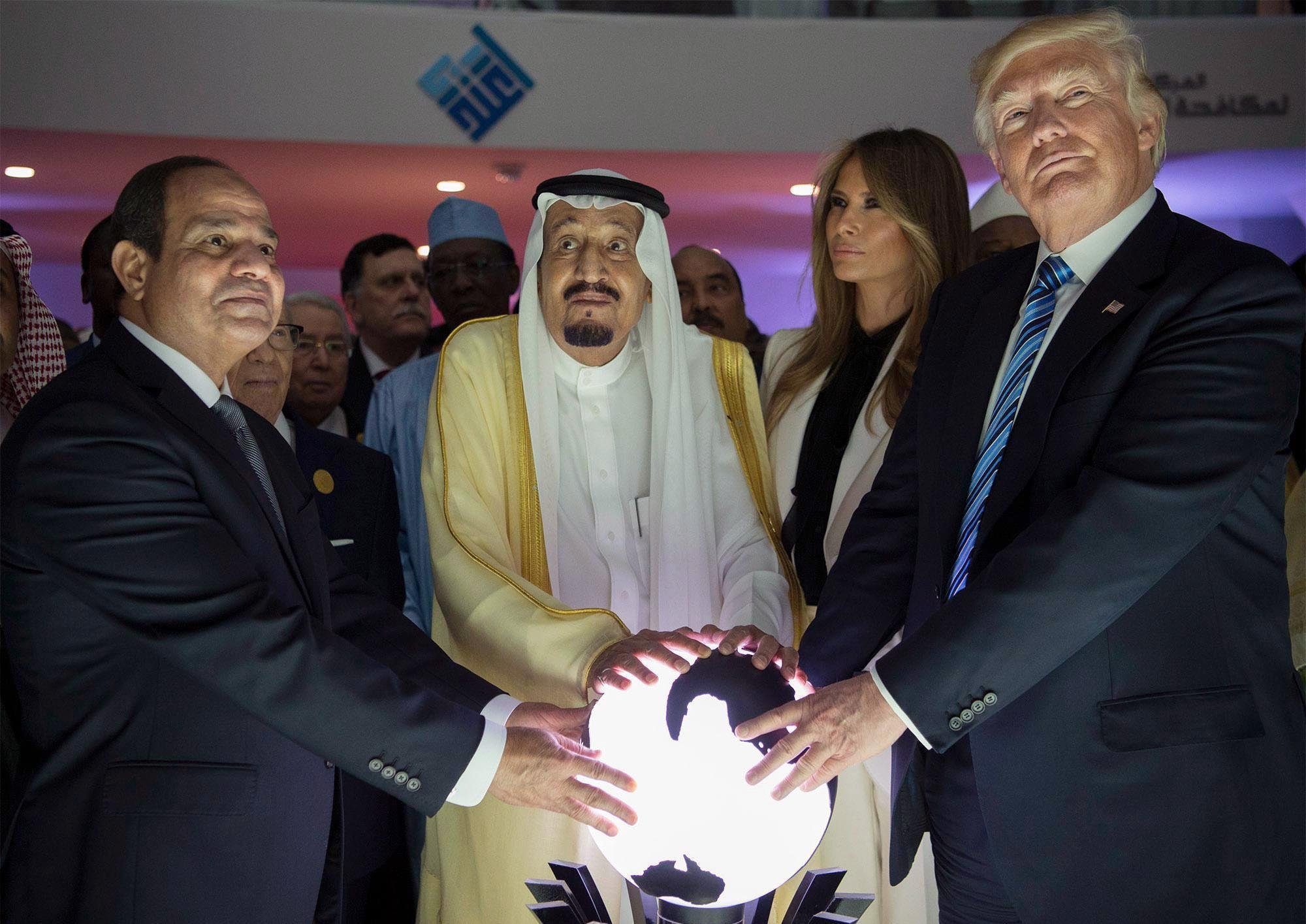 Yesterday, I pointed out that IP3, a company that claimed affiliation to Michael Flynn, admitted that US strategy in the Middle East has been to “resource conflict“. One of the two places the company made the claim was in a PowerPoint presentation addressed in July 2016 to the Saudi King but apparently never delivered. The presentation was made public by the Democratic members of the House Oversight Committee. Although the presentation is only 13 slides long, it is such a treasure trove of information that I anticipate several more posts with it as the central theme.

Today, I’d like to concentrate on only the security proposals in the presentation. Because Michael Flynn was previously the head of the Defense Intelligence Agency and because the approach to security by IP3 is highly intelligence-based, one would think that Flynn was central to IP3’s thinking in assembling this part of their plan. Slides 7 and 8 address the security plan. Here is slide 7: 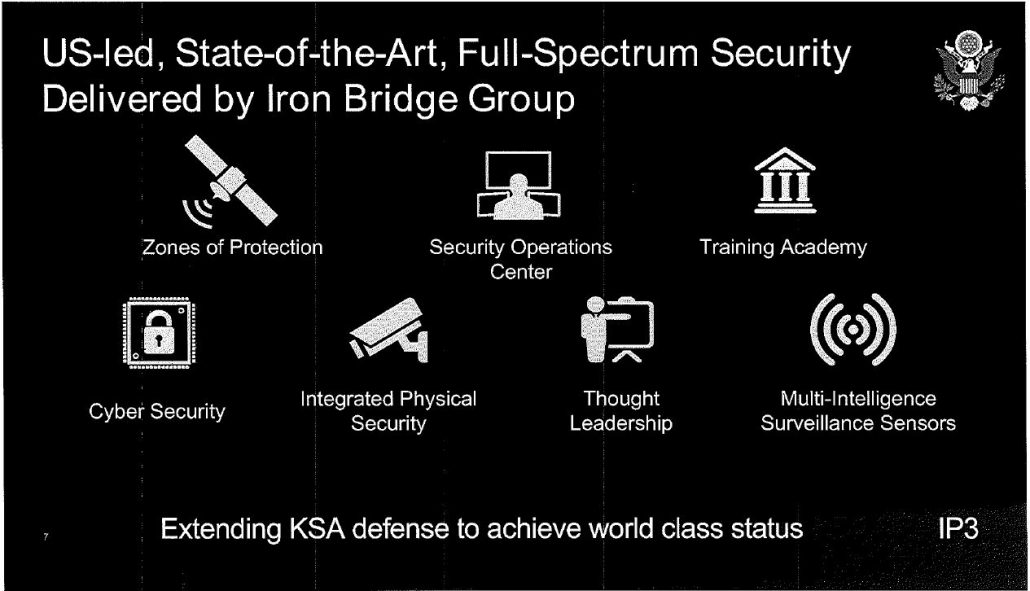 This slide is full of truly oppressive ideas and technology. Note the big reliance on cyber security in the lower left corner. With Keith Alexander on their team, IP3 is clearly relying on his “expertise” as the former head of NSA and his new business venture that he totally invented during his free time while having a job that did the exact same thing. In fact as Marcy pointed out to me, the name for IP3’s security subsidiary, Iron Bridge, echos closely Alexander’s company name of Iron Net. It should not come as a surprise, then, that many of the same suspects appear on both Iron Net’s “A-Team” and IP3.

Just what the heck are “Multi-Intelligence Surveillance Sensors”? When I Googled that phrase, one early result led me to this page , which appears to be a wish list of gadgets and technology put together by the military and intelligence community for the Office of Naval Research to fund in development. Much of that technology would seem to fit with a lot of the rest of the slide. Of course, the retired generals of IP3 would be aware of this and other technology believed to be in the pipeline and already in place for US capabilities. Although that page seems to rely on drones for the aerial cameras, the satellite in IP3’s slide would seem to be addressing similar capabilities.  The satellite definitely fits, though, for “large-area surveillance from tactical sensors across the radio frequency spectrum”. And just what are “Sensors that automatically produce metadata”? Those can’t be good news.

We couldn’t have a collection of retired US generals proposing any project abroad unless it has a major component of training. From the beginning of our time Iraq and Afghanistan, training has played a central role in both our plans and our failures. These guys just can’t get out of the belief that they can train foreign forces despite the ample evidence that we are utterly incapable of achieving any level of success in developing those foreign forces.

Any idea of “thought leadership” when put into a Saudi perspective is truly chilling. If these generals believe that the US “resources conflict” in the Middle East, then how can they escape acknowledging that Saudi madrassas resource terrorism? Of course, IP3 is claiming to be all about peace, so the thought leadership in this case would ostensibly be peaceful, but the entrenched nature of Saudi fostering of terrorist groups seems virtually impossible to stop from within. 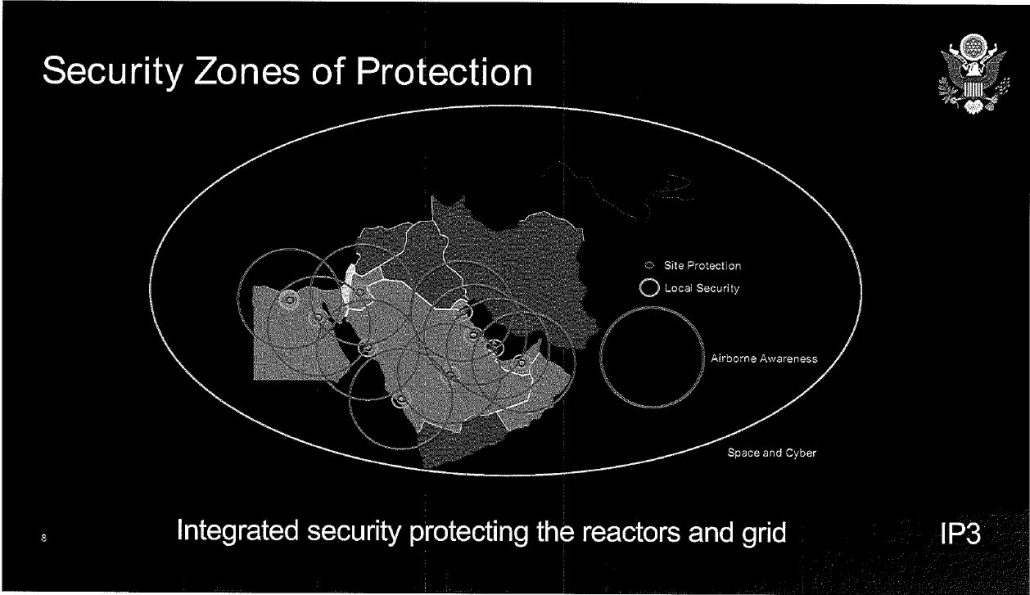 There is just so much to take in here. Notice that the outermost circle is labeled “Space and Cyber”, so the satellites and Alexander’s cyber wizardry are seen as covering everything. But there is a new element on this slide compared to the previous one: “Airborne Awareness”. Hmm, aerial based security. A relationship to China (the cover slide and several others bear the seal of China). That sounds very familiar. Who else has been hawking security services via aircraft and with a link to China? None other than Erik Prince. In fact, if you go to this Jeremy Scahill Intercept article from March of 2016 (just four months before the date of the PowerPoint) and click on the “Libya Border Solution” figure, you will see a schematic that doesn’t seem all that different from this one. Although Erik Prince isn’t mentioned in the IP3 presentation or listed on their website, it’s hard to escape the feeling that he’s lurking in the shadows for this group, ready and willing to broker his services, whether his board approves or not. Although Prince ostensibly is testifying today on his Seychelles meeting, I wonder if he will be questioned about any role he may have had in the IP3 proposal or any other group (say, Kushner’s Cambridge Analytica?) approaching the Saudis.

To finish up here, we have to move back to slide 7. You probably noticed I didn’t discuss the central feature, the “Security Operations Center”. That becomes a thing of beauty. Surely you remember the mysterious glowing Saudi orb and the photo of Trump touching it. It spawned weeks of wonderful memes in social media, but you might not have looked into just what was going on when the photo was taken. Here is the New York Times (hmm, the byline on this story is just “By The New York Times”):

The occasion was the opening of a new Global Center for Combating Extremist Ideology, based in Riyadh, and the orb was in fact a translucent globe, with the world’s waters represented in light gray and the continents in black. Its purpose appeared to be decorative.

The futuristic look of the darkened room may have helped to fire observers’ imaginations.

It was filled with computer terminals. At one end was a wall of monitors displaying feeds from news networks.

Among the many dignitaries at the event were Mr. Trump’s daughter Ivanka and her husband, Jared Kushner, and the Saudi crown prince, Mohammed bin Nayef.

The globe did not appear to have any magical powers, but when the king and Mr. Trump touched it, background music of the kind that might accompany a reality show’s elimination sequence or introduce a cable news program soared and pulsed. The screens glowed with statistical displays and videos about fighting terrorism. An unnamed official who narrated the features of the new control center said the displays used artificial intelligence to track, in real time, news reports and online statements.

It would appear that the Saudis already have their Security Operations Center and that its artificial intelligence-based technology might be similar to some of the technologies suggested in the IP3 slide. That it ostensibly is intended to combat terrorism just seems to me that it’s also aimed at the whole Thought Leader approach.

In the end, though, note that this facility is almost certainly still resourcing conflict, not stability. If you look carefully at the map in slide 8, you see that  Egypt is bright like Saudi Arabia (that’s Egypt’s President el-Sisi on the left, touching the orb), but Yemen is darkened. Don’t forget the Saudis are relentlessly bombing Yemen, using military equipment we have provided them, ostensibly to fight Houthi “terrorists”. From what I can see on the website for the center, there is zero disclosure of what countries and what “international organizations” are participating, but the Layers of Business Operations look pretty familiar. I wonder who helped the Saudis build this center? Who is helping them run it? 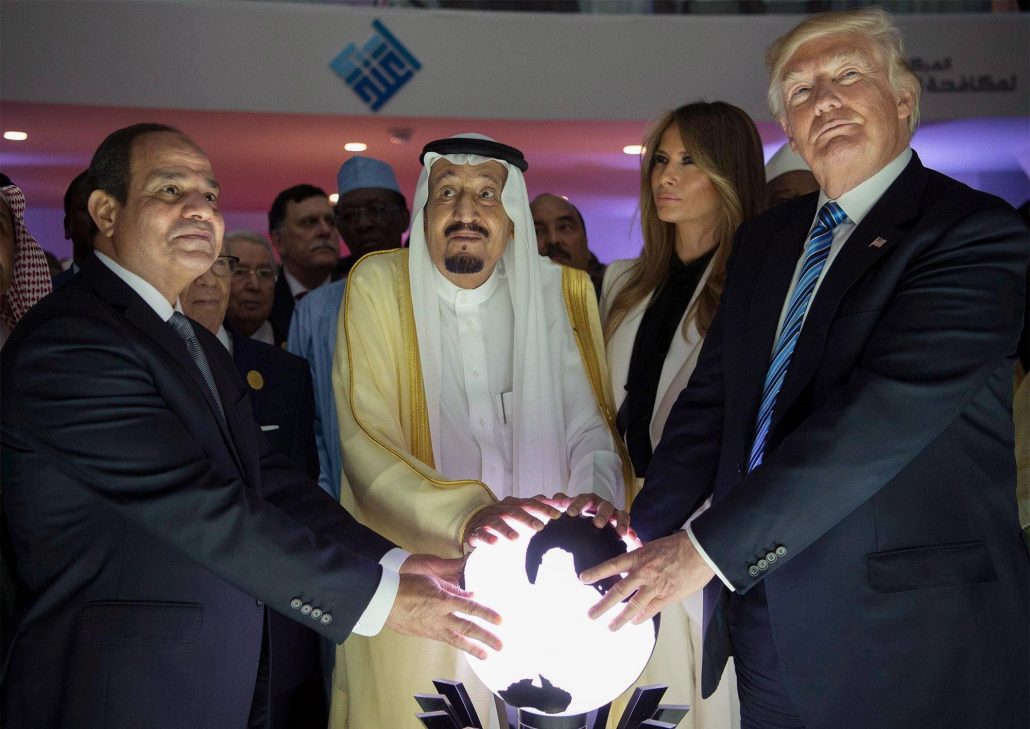 WAG: The Government Made a Significant FISA Back Door Request Just Before December... On the Jared and Flynn Stories