Seven January 6 defendants are known to have pled guilty on Friday:

The Meredith plea — the only one that wasn’t a misdemeanor trespassing plea — was pretty interesting because his prosecutors still haven’t revealed the substance of some sealed filings that will be taken into consideration at sentencing. Plus, Judge Amy Berman Jackson, who was threatened by Roger Stone and some Proud Boys two years before they teamed up to set off an attack on the Capitol, seemed unimpressed with Meredith’s claims that his threats against Pelosi weren’t all that serious.

But the Marquez plea may be more interesting over time. At the very least, that’s because he may mark a decision by DOJ to let edge obstruction defendants plead down to 18 USC 1752, the more serious of the two misdemeanor trespassing charges.

As I’ve laid out repeatedly, DOJ has used 18 USC 1512(c)(2), part of the crime of obstruction, to charge those who allegedly expressed the clear intent to prevent the vote certification with a felony. Upwards of 200 people, total, have been charged with obstruction, including Marquez. But among those charged with obstruction, there’s a great range of actions taken on January 6. Those charged include those who participated in a conspiracy — like Graydon Young and Josiah Colt, Jacob Chansley, who left ominous comments for Mike Pence on his dais seat and blew off repeated orders to vacate the Senate Chamber, and Paul Hodgkins, who brought his Trump flag to the Senate floor but left when the cops instructed him to.

I laid out here how Hodgkins, after he was the first to plead guilty, was sentenced to 8 months in prison after getting a three level enhancement for significantly obstructing the vote certification. But since that happened, at least ten different defendants have challenged this application of obstruction, posing difficult decisions for a number of judges.

Indeed, in the last several days, a number of defendants charged with obstruction have explicitly waived Speedy Trial rights to await the outcome of these challenges. That’s going to create a backlog in the already enormous logjam of January 6 defendants.

So I wonder whether DOJ will begin let the edge 1512 cases plead down to 1752. Particularly given judges’ apparent willingness to jail the misdemeanor defendants, for defendants not given a “significant obstruction” enhancement like Hodgkins got, the sentencing guideline is not that different, with up to a year available under 1752 (and probation after that), versus a range of 8 to 14 months on obstruction (that in reality might be closer to 3 to 8 months). The primary (but nevertheless significant) difference would be the felony conviction.

In other words, in cases where there are other circumstances that make such a plea worthwhile to DOJ, they’re certainly willing to consider it.

Still, it’s possible that Marquez represents a shift on DOJ’s part to do that for more defendants, as part of an effort to avoid a big backlog pending the review of the 1512 charge.

There were several other details of Marquez’ plea hearing of interest. The hearing started by talking about some kind of pretrial violation (possibly some kind of non-arrest run-in with law enforcement), which led to two new conditions being added to Marquez’s release, a mental health evaluation and a specific requirement to alert the government of any contact with law enforcement. That’s not how plea hearings usually start, but AUSA Jeffrey Nestler reaffirmed that DOJ wanted to go forward anyway. Judge Rudolph Contreras even asked whether the request for mental health evaluation raised questions about Marquez’ competency to plead guilty, though neither his attorney, Cara Halverson, nor Nestler, had any concerns about that.

Nestler, by the way, is one of the key prosecutors on the omnibus Oath Keeper case, and ably defended DOJ’s application of obstruction in that case in a hearing on Wednesday. Aside from that large group and cooperating Oath Keeper witness Caleb Berry, the only other January 6 case, besides Marquez’, that he is prosecuting is that of Guy Reffitt, who has ties to the 3%ers.

In addition to the oddities in Marquez’ plea hearing, there’s something not in his plea agreement that is standard boilerplate for all the plea agreements thus far: a cooperation paragraph. That paragraph is not a full cooperation agreement; rather, it simply requires the defendant to agree to be debriefed by the FBI. Here’s how it appears in Cordon’s plea agreement down from obstruction to 1752.

Its absence suggests that Marquez has already been debriefed. Indeed, an April motion to continue the case described that the evidence against Marquez included, “social media data, cell phone extraction data, as well as custodial interview files,” suggesting he was interviewed on his arrest.

That Marquez may have already provided truthful information is of interest because he spent part of the riot in Jeff Merkley’s office. His statement of offense describes his actions there obliquely:

While inside the Capitol, Marquez entered the private “hideaway” office of Senator Merkley where he sat at a conference table with other rioters.

His arrest affidavit describes a video Marquez posted to Snapchat from his time there.

3:45 to 4:11 – This clip is from inside a conference room.2 Several people are seated and standing around a mahogany table. Some people say, “No stealing; don’t steal anything.” At 4:02, a hand is visible, holding a light-tan colored vape pen similar to the one MARQUEZ was holding in the car in the clip from 0:54 to 1:54. At 4:04, someone pushes over a table lamp and says, “Why would I want to steal this bullshit.”

4:11 to 4:20 (end) – In this clip MARQUEZ turns the camera lens to film himself. He is wearing a red “KEEP AMERICA GREAT” hat and has a yellow gaiter around his neck, similar to what he was wearing in the earlier clip from 0:54 to 1:54. MARQUEZ appears to still be indoors, with a distinctive blue piece of artwork – the same as seen in Senator Merkley’s hideaway office – on the wall behind him. This is a screenshot of MARQUEZ’s face from the video: 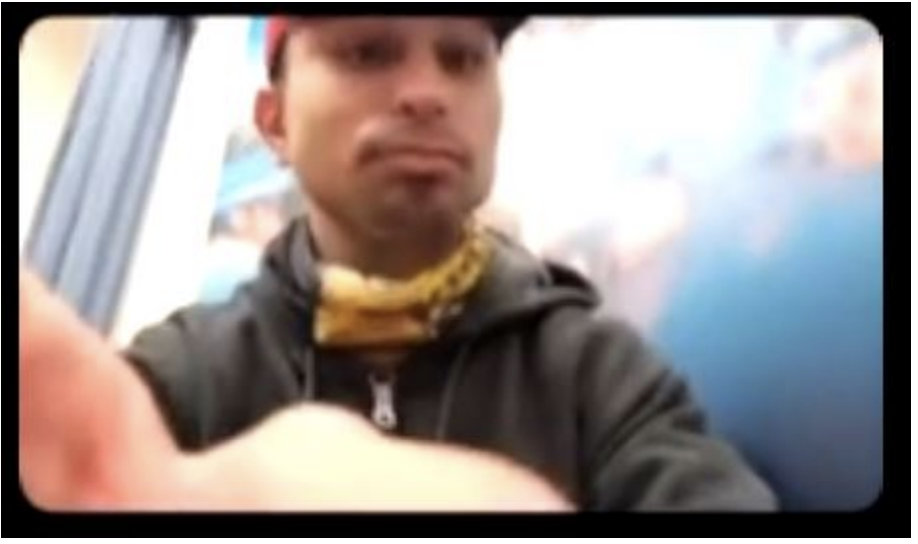 2 Based upon conversations with representatives of the United States Capitol Police, the conference room in which MARQUEZ is present appears to be Senate room S140, the private “hideaway” office of Senator Merkley within the U.S. Capitol. The artwork visible on the walls of the conference room in MARQUEZ’s Snapchat video is also visible on a video that Senator Merkley posted to Twitter on January 6, 2021, at 11:36 pm, documenting some of the damage to his office.

Still, none of these descriptions reveals what Marquez might have seen (and subsequently shared) while in Merkley’s office.

Presumably partly because there’s little to no security footage of what went down, the investigation into what happened in Merkley’s office is one of the most interesting subplots of the investigation. There have been a number of trespassers who seem to have been arrested just to get their footage of what happened.  There’s a defendant who has never been charged who was, nevertheless, given discovery on the laptop that got stolen from Merkley’s office. And in the last few weeks, Brandon Fellows (who like Marquez has been charged with just obstruction but spent time in Merkley’s office) got a CIPA notice, meaning the government wants to use classified evidence against him.

In short, we simply don’t know. There’s something interesting about this plea. But it’s unclear what that is.