It’s Not the Campaign Finance Violation or the Simple Private Transaction, It’s the Conspiracy to Commit Fraud

Andrew McCarthy has finally come around to the criminal behavior of the President, though he has found it in Trump’s hush payments rather than his conspiring with Russians. But, in typical fashion, McCarthy stops short of the hard-charging prosecutor he once was, and suggests Trump may have a way out of his crime because campaign finance law favors the candidate.

This is not to suggest that the president is without cards to play. Campaign finance violations have a high proof threshold for intent. President Trump could argue that because there was no spending limit on his contributions, he did not think about the campaign-finance implications, much less willfully violate them.

There is, furthermore, a significant legal question about whether the hush-money payments here qualify as “in-kind” campaign contributions.

McCarthy does this even while rightly emphasizing the language in Michael Cohen’s SDNY sentencing memo that focuses on transparency.

First, Cohen’s commission of two campaign finance crimes on the eve of the 2016 election for President of the United States struck a blow to one of the core goals of the federal campaign finance laws: transparency. While many Americans who desired a particular outcome to the election knocked on doors, toiled at phone banks, or found any number of other legal ways to make their voices heard, Cohen sought to influence the election from the shadows. He did so by orchestrating secret and illegal payments to silence two women who otherwise would have made public their alleged extramarital affairs with Individual-1. In the process, Cohen deceived the voting public by hiding alleged facts that he believed would have had a substantial effect on the election.

This language very clearly signals that SDNY believes those involved in this crime thwarted the transparency requirements imposed by campaign finance law. It’s not just the payment itself, it’s the fraud conducted on regulatory bodies designed to ensure transparency. And, equally clearly, SDNY lays out that Cohen did not act on his own.

So even while McCarthy notes that Trump was named personally, he deemphasizes how many players worked together to coordinate these hush payments: In addition to Trump, Cohen’s hush payment lawyer Keith Davidson, the National Enquirer, its Chairman David Pecker, its Editor Dylan Howard on the Karen McDougal payment:

With respect to both payments, Cohen acted with the intent to influence the 2016 presidential election. Cohen coordinated his actions with one or more members of the campaign, including through meetings and phone calls, about the fact, nature, and timing of the payments. (PSR ¶ 51). In particular, and as Cohen himself has now admitted, with respect to both payments, he acted in coordination with and at the direction of Individual-1. (PSR ¶¶ 41, 45)

And then Davidson, Howard, and Trump Organization, with the involvement of several of its executives (probably including one of Trump’s spawn) on the Stormy Daniels payment.

Executives of the Company agreed to reimburse Cohen by adding $130,000 and $50,000, “grossing up” that amount to $360,000 for tax purposes, and adding a $60,000 bonus, such that Cohen would be paid $420,000 in total. Executives of the Company decided to pay the $420,000 in monthly installments of $35,000 over the course of a year. (PSR ¶¶ 52-53). At the instruction of an executive for the Company, Cohen sent monthly invoices to the Company for these $35,000 payments, falsely indicating that the invoices were being sent pursuant to a “retainer agreement.” The Company then falsely accounted for these payments as “legal expenses.”

Importantly, the sentencing memo focuses on the “sophisticated means” that Cohen used — the shell companies and the structured repayments — pointing to fraud, not just campaign finance violations.

The “sophisticated means” enhancement is addressed to Cohen’s use of complex means to carry out and disguise his crimes. For example, Cohen created shell companies for his commission of the campaign finance crimes, including one shell entity (Resolution Consultants) for use in the transaction with Woman-1 and another shell entity (Essential Consultants) for use in the transaction with Woman-2. (PSR ¶¶ 43, 47.) Cohen also agreed to structure the reimbursement for his payment to Woman-2 in monthly installments, and to disguise those payments by creating fake invoices that referenced a non-existent “retainer.” (PSR ¶ 54.)

While it is true that Cohen pled guilty to campaign finance violations, that’s not what SDNY lays out in this memo. Rather, they lay out conspiracy to defraud the United States, which carries a five year prison sentence, on top of any campaign finance or money laundering prosecution to carry out that fraud. That’s the same charge that Trump appointee Dabney Friedrich just upheld for the Russian trolls that helped Trump win, the same charge that Rick Gates and Paul Manafort have pled guilty to, the same ConFraudUS that Mueller has built all his interlocking indictments around. And there, it’s not so much the intent or success of the attempt to thwart campaign finance oversight that matters, it’s the conspiracy to do it and the secrecy and sophisticated means by which you do it.

So Trump may want to claim this is a “simple private transaction,” just like all the other hush payments he has orchestrated with his buddy Pecker over the years. 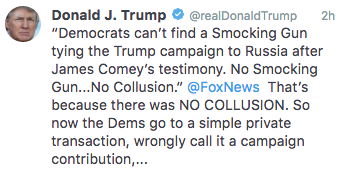 But when you carry out such “simple private transactions” in the context of an election then it becomes conspiracy to commit fraud.

And to reiterate: it’s not just Trump himself that can be charged with ConFraudUS for this, it’s also The Company and whichever spawn served as The Executive seeking to hide the payback for Cohen’s hush payments.

Heck. Even the NYT is beginning to figure this out. 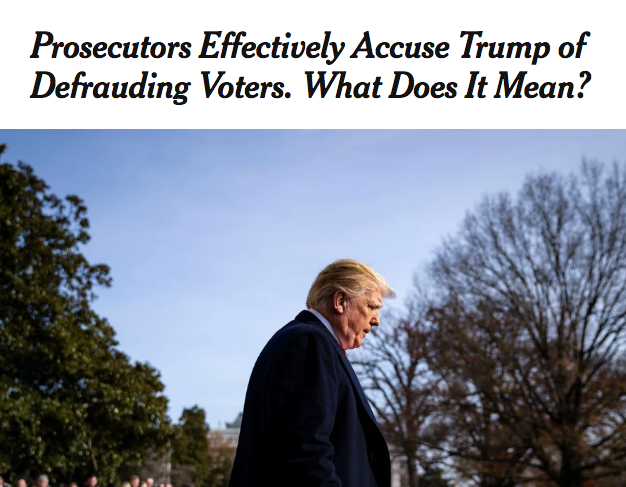 What it means is that both Trump (after he’s no longer President) and his company (as soon as SDNY gets around to charging it and its executives) are on the hook for cheating to get elected.