Going Postal. And Digital. And Financial: The Dragnet Elephant 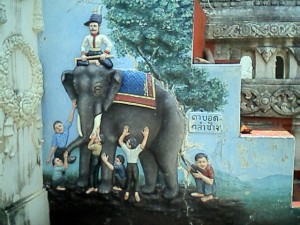 The NYT has a report on an IG Report from May that reveals the Postal Service has been doing a lot more “mail covers” (that is, tracking the metadata from letters) than it had previously revealed.

In a rare public accounting of its mass surveillance program, the United States Postal Service reported that it approved nearly 50,000 requests last year from law enforcement agencies and its own internal inspection unit to secretly monitor the mail of Americans for use in criminal and national security investigations.

Among the most interesting revelations is that USPS previously lowballed the number of covers it does in response to a NYT FOIA by simply not counting most of the searches.

The report led Ben Wittes to engage in a thought experience, predicting the response to this revelation will be muted compared to that of the phone dragnet.

All of this raises the question: Will this program generate the sort of outrage, legal challenge, and feverish energy for legislative reform that the NSA program has? Or will it fall flat?

I have this feeling that the answer is the latter: The Postal Service’s looking at the outside of letters at the request of law enforcement just won’t have the same legs as does the big bad NSA looking at the routing information for telephone calls. The reason, I suspect, is not that there are profound legal differences between the two programs. Yes, one can certainly argue that the difference between a program that aspires to be totalizing and one that is notionally targeted, even if very large, is fundamental enough to justify regarding the former with great skepticism and tolerating the latter with a shrug. On the other hand, one could just as easily argue that a program that involves the active perusal of tens of thousands of people’s metadata without strict controls is far more threatening than one that involves tight procedures under judicial oversight and involves initial queries of only a few hundred people’s data.

The reason, I suspect, that this program will not excite the same sorts of passions as does the NSA’s program is that it involves old technology—paper—and it’s been going on for a long time.

I agree with Wittes that this won’t generate the same kind of outrage.

The fact that few noticed when Josh Gerstein reported on this very same report (and revealed that the USPS was trying to prevent the report’s release) back in June (I noticed, but did not write on it) supports Wittes’ point.

All that said, Wittes’ piece serves as an interesting example. Partly because he overstates the oversight of the phone dragnet program. Somehow Wittes doesn’t think the watchlisting of 3,000 presumed American persons with no First Amendment review until 2009 is not an example of abuse. Nor the preservation of 3,000 files worth of phone dragnet data on a research server, mixed in with Stellar Wind data, followed by its destruction before NSA had to explain what it was doing there (which is a more recent abuse than Joe Arpaio’s use of the mail dragnet to target a critic, reported in the NYT).

But also because Wittes misconstrues what a true comparison would entail.

To compare phone dragnet, generally, with the mail dragnet described by the NYT (now including both its national security and Postal Inspection searches), you’d have to compare Title III and local law enforcement phone metadata searches (which number in the hundreds of thousands and include the use of Stingrays to track phone location), Hemisphere (which must number in the 10s of thousands and not only undergo no court review, but are explicitly parallel constructed), the use of NSLs to obtain phone metadata (which number in the 10s of thousands, and which are not overseen by a court, have been subject to abuse, also miscount the most important requests, and access new kinds of data that probably aren’t really covered under the law), the Section 215 dragnet, the FBI bulk PRTT program, as well as the far far bigger EO 12333 phone dragnet.

Or perhaps more appropriately, of that old fable of the 6 blind men and the elephant, where each of a series of blind men describe an elephant. These men each feel one part of the elephant and see a pillar, a rope, a tree branch, a hand fan, a wall, and a solid pipe.  Together, they fail to conceive of the elephant in its entirety.

Wittes’ partial view of the phone dragnet describes just one part of one part of the dragnet elephant. At both the NSA, the FBI, and local JTTFs (at a minimum) you’re not conceiving the dragnet unless you understand the implications of matching your phone records and email records to your financial purchases and Internet search cookies — and, your snail mail, which is ultimately just a part of the larger dragnet. Each of those dragnets has several interlocking forms, too. More Title III orders, more NSLs, more Section 215 orders, and more EO 12333 collection. All dumped into a black box that — even for the Section 215 phone dragnet — undergoes no apparent oversight.

But Wittes is by no means alone in his partial view of the dragnet elephant. We all suffer from it. Since the very start of the Snowden leaks, I have been trying hard to track how NSA data gets shared with other agencies (see, for example, NCTC, FBI and CIA, “Team Sport,” ATF). I suspect I’ve got as good an understanding of how this data worms its way through the government as anyone outside of some corners of government, but it still looks like an elephant trunk to me.

That, to me, is the real lesson from the focus on yet another dragnet available to yet more intelligence and law enforcement agencies. None of us yet have a good sense of the scope of the dragnet. It is, quite literally, inconceivable. And we have even less of an idea of what happens after the dragnet feeds all that data into a series of black boxes, most subject to very little oversight.