Days after an Oath Keeper Event with Roger Stone, Kelly Meggs Described Having “Organized an Alliance” with the Proud Boys

I had been waiting for the moment when DOJ would unveil some of the Facebook content that Graydon Young attempted to delete when he shut down Facebook on January 7. I had similarly been waiting to see how DOJ rolled out Roger Stone as a key pivot between the Florida Oath Keepers (which Kelly Meggs led, and which Stone bodyguards Roberta Minuta and Joshua James were part of) and the Proud Boys (whose key leaders Enrique Tarrio and Joe Biggs live in Florida).

Overnight, in its response to Meggs’ attempt to get bail, the government did both. Ostensibly, they did so to show that Meggs’ interview with the FBI had not been entirely truthful about (among other things) being in DC to protect the cops and vetting Oath Keeper members.

This sentiment appears in conflict with Defendant Meggs’s allegation in his motion (and what he stated to the FBI upon his arrest) that he was at the Capitol to help “protect” police officers. (ECF 82 at ¶ 15.)

On the evening of January 3, 2021, co-defendant Steele sent an email to Defendant Meggs’s email account at Proton Mail,8 copying co-defendant Young. Steele attached her application and vetting form, and wrote: “My brother, Graydon Young told me to send the application to you so I can be verified for the Events this coming Tuesday and Wednesday.” Defendant Meggs appears to have provided instructions to co-defendant Steele, because the following day (January 4), Steele again sent her application and vetting form to another Oath Keepers email address at Proton Mail. On her email, she copied Defendant Meggs. In contrast to this evidence, Defendant Meggs inexplicably told the FBI that “the only person I’ve ever vetted” was a man six months earlier. Interview Tr. at 28-29.

In a filing that revealed details of Meggs’ Facebook, Signal, ProtonMail, and GoToMeeting use, it described Meggs writing on December 19 — five days after his wife and Young did “security” for Roger Stone at a Stop the Steal rally, evidence of which the government presented (the picture below) in their response to Meggs’ wife’s bid for bond — that he had “organized an alliance between the Oath Keepers, Florida 3%ers, and Proud Boys” to “shut this shit down.”

On December 26, Meggs called this insurrection (albeit in response to Trump’s order) explicitly. 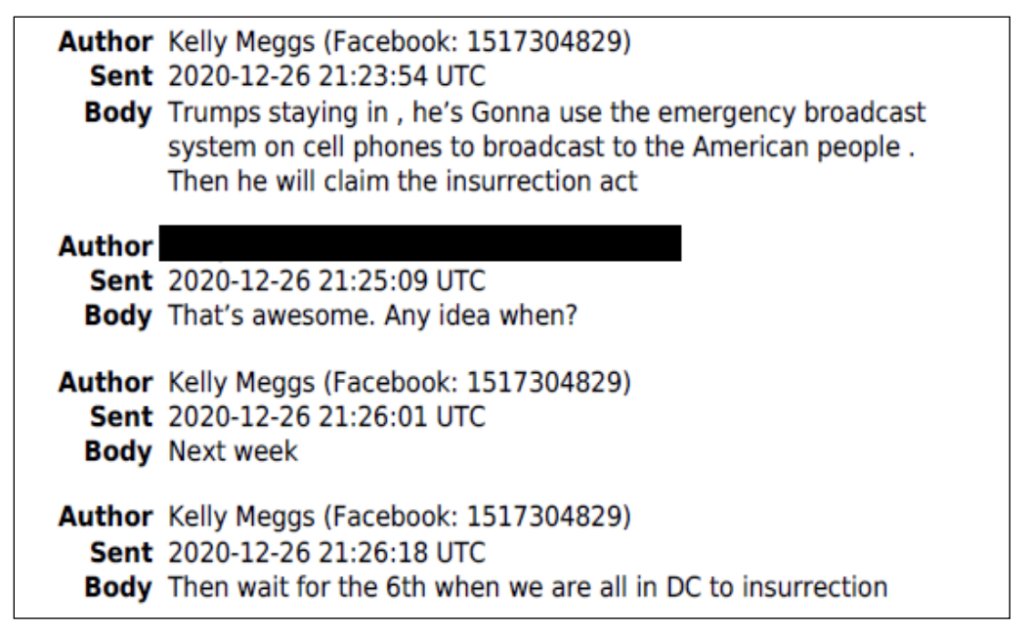 DOJ included some (not all though: there was one called ““florida dc op planning chat” they don’t seem to have included) of the planning meetings on GoToMeeting.

A week ago, DOJ was content to prove that Connie Meggs’ claims that she didn’t know any of these people by introducing the picture where she and Graydon Young posed with Stone on December 14.

And Defendant Meggs obviously was acquainted with other members of the Oath Keepers group who stormed the Capitol with her on January 6; the photo below, which was shared on Facebook on December 15, 2020, shows Defendant Meggs (red oval) posing at a book signing with several other individuals, including co-defendant Graydon Young (green oval): 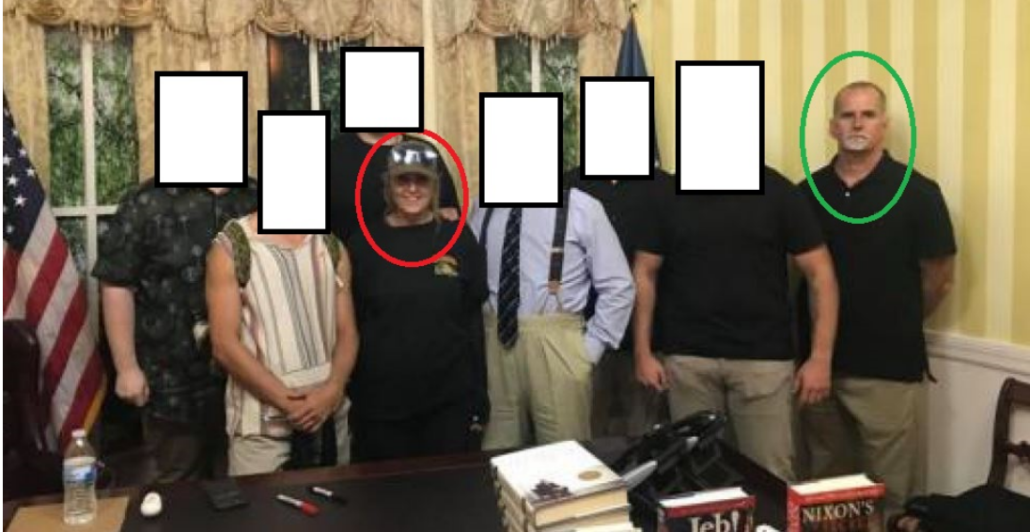 Yesterday, prosecutors in this case had to get chewed out because former Acting US Attorney Michael Sherwin blabbed his mouth (completely inappropriately) on 60 Minutes, discussing what at that point had been merely a suggestion, that DOJ’s conspiracy case would integrate three different militia groups.

And the bulk of those cases are federal criminal charges, and significant federal felony charges. Five, 10, 20-year penalties. Of those 400 cases, the majority of those, 80, 85%, maybe even 90, you have individuals, both inside and outside the Capitol, that breached the Capitol, trespassed. You also have individuals, roughly over 100, that we’ve charged with assaulting federal officers and local police officers. The 10% of the cases,  I’ll call the more complex conspiracy cases where we do have evidence, it’s in the public record where individual militia groups from different facets: Oath Keepers, Three Percenters, Proud Boys, did have a plan. We don’t know what the full plan is, to come to D.C., organize, and breach the Capitol in some manner.

By the end of the day (having had their secret blown), DOJ showed that not only had the guy in charge of the Stack been thinking in terms of “insurrection” for over a week, but was also thinking about coordinated action among the different militia.

There’s still a problem with this conspiracy, as constructed. The Oath Keepers had a plan — which DOJ has now presented evidence they coordinated with two other militia groups. But the plan wasn’t limited to preventing vote certification (in part, because when they traveled to DC, they still believed that Trump or Mike Pence might make such an action unnecessary). The plan was insurrection.

But that only makes it more likely DOJ will be forced to charge it as such.