Judge Anthony Trenga has issued his order on John Durham’s omnibus motion in limine in the Igor Danchenko case which was — as the equivalent motion was in the Michael Sussmann case — a last desperate bid to turn a false statements trial into a conspiracy theory.

On all the most substantive issues, including whether Durham will be able to fly a German Ritz Hotel staffer in to testify about the pee tape, which is not charged, Trenga ruled against Durham.

Both the issues on which Trenga ruled for Durham — Dolan’s knowledge that Danchenko worked for Steele and Millian’s July 2016 email — may actually hurt Durham’s case. On all the other issues, every bit of Durham’s effort to spin a conspiracy theory, Trenga has ruled for Danchenko.

And aside from noting, twice, that Millian had “opportunity and motive to fabricate and/or misrepresent his thoughts,” there’s another sign that Trenga gets what Durham’s ruse is.

His reasoning for excluding the pee tape lays out all the flimsy threads Durham spun in an effort to present his conspiracy theory.

Through [German Ritz employee] Kuhlen, for example, the government seeks to prove that Danchenko completely fabricated his sources to Steele on the Ritz-Carlton allegations and then lied about it to the FBI to keep Dolan off the FBI’s radar. But that justification faces several obstacles. First, Dolan’s role in these uncharged false statements is unclear. The government does not allege that Dolan was a source for Danchenko’s Ritz-Carlton reporting, and therefore this evidence seemingly is not being used to prove the falsity of Danchenko’s statement in Count I. While Dolan, in June 2016, received a tour of the presidential suite and had lunch with the hotel’s general manager and staff, the government does not appear to intend to present evidence that Dolan told Danchenko about those events, including meeting or speaking with Kuhlen.2 Thus, the link between Danchenko’s allegedly false statement about the Ritz and Dolan is a highly attenuated one. Perhaps recognizing this, the government instead proffers that this evidence goes to proving the materiality of Danchenko’s Count I statement, not its falsity. But the proffered evidence relating to the RitzCarlton allegations bears little probative value in terms of materiality. The government contends that had Danchenko told the FBI that Dolan was a source it is more likely that it would have interviewed Dolan, in part, because of his proximity to Danchenko in June 2016. But that fact can be established separate and apart from trying to prove Danchenko lied about his Ritz-Carlton sourcing. The government can sufficiently establish at trial that Danchenko engaged in fact gathering for the Steele Reports in Moscow in June 2016, that Dolan was present in Moscow during that same time, and that the two met in Moscow, without getting into the purported false statements or the underlying details, which have an attenuated connection to the charged false statement. Additionally, and perhaps more importantly, proving up an uncharged false statement does not bear on the materiality of the charged false statement.

Second, the government fails to reference any evidence that Danchenko told Steele either that he met with Kuhlen or, more generally, a western member of the hotel staff. The government does not, by all indications, intend to call Steele as a witness; and in terms of what Danchenko told Steele, the jury will be left solely with the hearsay description in the Report itself, which Steele, not Danchenko, prepared. Why Steele characterized the sources for the Ritz-Carlton allegations as he did in the Report or, indeed, whether the listed sources, in fact, came from Danchenko are subject to a significant degree of speculation. As such, the reference in the Report to those sources does not provide strong evidence that Danchenko informed Steele that he met with a western member of the hotel staff. Moreover, when asked by the FBI about “Source E” in his May 18, 2017 interview, Danchenko completely equivocated. See [Doc. No. 84], at 11 (“Danchenko: . . . I don’t think it’s just uh, I don’t think [UI] one of the um, hotel managers. Agent 1: You think source E is? Danchenko: [ ] Somebody I met. . . . And I don’t know who, who [Steele’s] referring to.”). The government seeks to prove that Danchenko never met with Kuhlen; and while that may be true, that evidence does not, given the circumstances, have much probative value concerning whether Danchenko lied to the FBI about his sourcing of the Ritz-Carlton allegations.

2 The government’s position on the probative value of this evidence, aside from materiality, is unclear. The government at one point, characterizes Dolan as a “fact witness” because of his tour of the presidential suite and time at the Ritz-Carlton in general, but does not draw a clear line between Dolan’s experiences and Danchenko’s reporting to Steele. [Doc. No. 78], at 10. The Indictment strongly implies, however, that Danchenko used information learned from Dolan during the June 2016 Moscow planning trip in his reporting to Steele. [Indictment], ¶¶ 30-34.

Judge Trenga won’t let this stuff in not just because the Rules of Evidence say you can’t rely on the emails of an unreliable witness written four politicized years after the fact without making him show up and risk prison himself to substantiate his claims.

He ruled against this stuff because Durham has not claimed to have any evidence to justify a number of wild leaps of logic he made to spin this conspiracy theory in the first place: Durham has not claimed to have (reliable) evidence about what Dolan told Danchenko over 6 years ago (indeed, Dolan apparently, “will testify that he has no recollection of seeing the defendant at the Ritz Carlton in June 2016”). Durham does not claim to know what Danchenko really told Steele about the pee tape, and he does not claim to know to what degree Steele exaggerated what Danchenko told him or if he otherwise reported it unfaithfully. The evidence Durham does have — that Danchenko made equivocal statements in response to a speculative cue and told the FBI his reporting stopped well short of what Steele claimed it did — doesn’t say what Durham claims it does.

That didn’t stop any number of media figures — Devlin Barrett, Jonathan Swan, Barry Meier, Rachel Weiner, and Marshall Cohen, among others — who regurgitated the evidentiary flimsiness of Durham’s conspiracy theories and printed them as fact.

You’d be forgiven for believing those things. After all, the WaPo reported charges, plural, showed that “some of the material” in the Steele dossier came from Dolan.

The indictment also suggests Danchenko may have lied to Steele and others about where he was getting his information. Some of the material came from a Democratic Party operative with long-standing ties to Democratic presidential nominee Hillary Clinton, according to the charges, rather than well-connected Russians with insight into the Kremlin.

The allegations cast new uncertainty on some past reporting on the dossier by news organizations, including The Washington Post.

Relying on that report, Jonathan Swan described charges, plural, that Dolan was, “one of the sources for the rumors about Trump.” 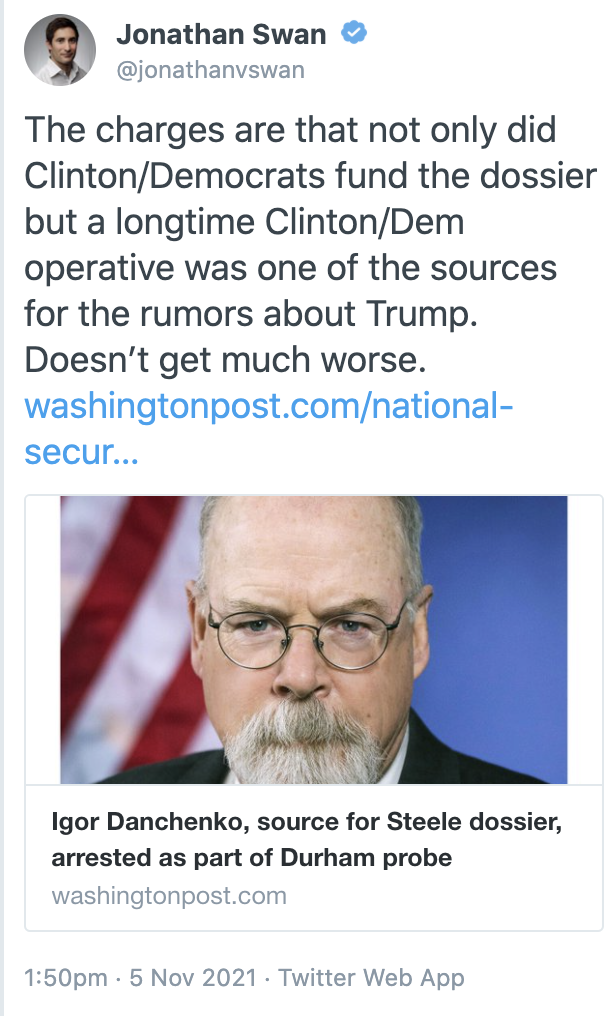 And Barry Meier, who so badly misunderstood the import of Oleg Deripaska in his book on private intelligence, also claimed there were charges, plural, relating to Dolan and insinuated that Durham had alleged the pee tape came from him.

In Durham’s indictment, however, Danchenko comes across more like the type of paid informant often found in the world of private spying — one who tells their employer what they want to hear.

According to those charges, he supposedly fed Steele some information that did not come from Kremlin-linked sources, as the dossier claims, but was gossip he picked up from an American public-relations executive with Democratic Party ties who did business in Moscow. In 2016, the indictment states, the manager of the Ritz-Carlton in Moscow gave that executive a tour of the the hotel’s presidential suite, and soon afterward, Danchenko took a selfie of himself and the executive at the hotel.

Reporting on Danchenko’s arraignment, WaPo went off at more length, not only failing to distinguish an uncharged accusation as such (one likely source of the belief that Durham charged multiple counts pertaining to Dolan), but stating as fact that Danchenko made up an entire conversation — one Danchenko has consistently attributed to a named Russian source — regarding the pee tape.

He is also accused of lying about revealing to sources that he was working for Steele.

Durham says Danchenko made up a conversation he claimed was the source of one of the dossier’s most salacious claims, that Trump paid prostitutes at a Moscow hotel room to urinate on a bed in which President Barack Obama had once slept. The dossier also suggested Russian intelligence agencies had secretly recorded that event as potential blackmail material. Trump has denied any such encounter.

The indictment suggests that story came from Dolan, who in June 2016 toured a suite at a hotel in Moscow that was once occupied by Trump.

Judge Trenga’s ruling will spoil the frothers’ hopes for a trial about the pee tape.

But the frothers aren’t the problem: The problem is how many actual journalists bought this sleight of hand and now remain silent about the baseless claims they perpetuated last year.

Update: Meanwhile, Danchenko has moved to: