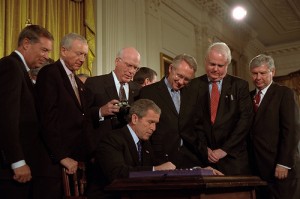 October 3, 2001 Tom Daschle, Majority Leader, announces that he doubts the Senate will take up the Patriot Act on the one-week timetable Bush administration has requested.

October 3, 2001 Stevens is confirmed to have anthrax.

October 4, 2001 Pat Leahy, Chair of the Senate Judiciary Committee, accuses the Bush administration of reneging on an agreement about the Patriot Act.

October 7, 2001 The building where Stevens worked is shut down after anthrax spores were found on the keyboard of his computer.

October 12, 2001 Judy Miller receives hoax anthrax letter in her office at the New York Times.  (See below for further discussion of Judy Miller and William Patrick)

October 12, 2001 Dick Cheney appears on the PBS Newshour for a long interview.  Among other things, he pushes for passage of the Patriot Act.  In response to a discussion about what Americans can do to protect themselves, he says:

We need to improve our – some of our law enforcement procedures, and we’ve got legislation pending before the Congress, for example; it’s important we get that through. Every day that goes by when we don’t have all the tools we think we need to find out who these people are and to run them to ground is one more day when we could conceivably suffer the consequences of undue delay. Call your congressman and senator, tell them that’s important legislation, you’d like to see it passed.

October 15, 2001 Daschle letter is opened and tests positive for anthrax.  [The Leahy letter had been mis-routed and was not discovered until November 16.]

October 24, 2001 House passes Patriot Act by vote of 357-66 with 9 representatives not voting. A breakdown of the votes can be seen here.

October 25, 2001 Senate passes Patriot Act by vote of 98-1, with one not voting.  Russ Feingold was the “no” vote and Mary Landrieu was the Senator who did not vote.  There was no public debate in either the House or Senate.

Judy, Judy, Judy (and William Patrick) I want to return to the role of Judy Miller.  Recall that she published the article disclosing Project Bacus one week prior to 9/11.  Part of the reason for publishing that article and several more on the topic of bioweapons was that she and two co-authors had written a book, “Germs: Biological Weapons and America’s Secret War”.  The publication date of the book was October 2, 2001.  One of her primary sources for writing the book was William Patrick, who had headed the United States’ offensive bioweapons research in the 1960’s at Fort Detrick (yes, the same Fort Detrick where Bruce Ivins worked later).  It is clear from Miller’s writing that Patrick was a consultant to Project Bacus and almost certainly was the source of information for weaponizing anthrax and anthrax simulants during this time.

In association with the publication of the book, Miller and co-author William Broad also participated in a one hour episode of the PBS science series Nova, which aired November 13, 2001.  There is a very chilling interview with William Patrick published in association with the program and there is even video of Patrick dispersing a cloud of an anthrax simulant.  In the interview, Patrick discusses his disagreement with Richard Nixon when Nixon unilaterally cancelled offensive bioweapons research in 1969.

William Patrick died just over a year ago.  Miller wrote a tribute to him on her website.  This part is of particular relevance:

That was how we met. Bill Broad, a science journalist and then my colleague at the New York Times, and I went to see him in 1997 at his comfortable home atop a wooded hill in Frederick, Maryland, not far from the government bio-lab where he had worked for over 35 years. As we sipped tea on his porch and munched sandwiches prepared by his wife, Virginia, his dog, Billy the Kid, tried snatching chips from our plates. Strains of classical music filled the air and hummingbirds buzzed above the bird feeders he and Ginny had set at strategic spots on the terrace.

Then this seemingly cheerful father of two led us downstairs to his basement office, as he had legions of other students of the black bio-arts, to give us a PowerPoint tutorial on how germ weapons were made, stored, and distributed. He patiently answered our questions about how bacteria, viruses, and other deadly pathogens could be used as weapons of mass destruction. Near the end of our session, he pulled a garden sprayer out of a green duffel bag and vigorously pumped it several times, producing a large cloud of fine particles that hung in the air like fog. If this were anthrax, he told us, we would all soon be dead. Offering me a memento of our class, he put a vial of the simulated anthrax in my purse and scribbled his home number on the stationery of his one-man consulting firm, Biothreats Assessment. It was topped with an image of the Grim Reaper. A skull and crossbones were engraved on the business card he handed me. Call any time, he said merrily.

With that as background, consider portions of the article Miller wrote describing her experience with the anthrax hoax letter she received.  After opening the article by saying the powder in the letter looked like baby powder and smelled sweet, she eventually wrote:

As I washed my hands and tried to dust off the powder that clung to my pants and shoes, I thought about what Bill Patrick, my friend and bio-weapons mentor, had told me: anthrax was hard to weaponize. To produce a spore small enough to infect the lungs took great skill. Bill knew that firsthand. He had struggled to manufacture such spores for the United States in the 1950’s and 60’s as a senior scientist in America’s own germ weapons program, which President Richard M. Nixon had unilaterally ended in 1969.

The other cases, Bill told me, could well have involved a larger spore that was cut with baby powder or another substance to mask the deadly pathogen with a smell that was reassuringly familiar. Anthrax itself had no smell. And it was almost never white.

By now, I was no stranger to this deadly agent. My education had started with Bill Patrick’s demonstration of how easily anthrax could be slipped past airport security. Bill had shown me how the fine powder in the small vial he kept on his desk dissolved like magic into the air when the vial was shaken and poured.

In general, Miller’s article is a personable account of the fear generated by a potential anthrax attack and how the average person would respond.  The problem with this narrative, though, is that Miller should have been far from the average person. She had been researching bioweapons for several years as she wrote her book. She had known Patrick for about four years at the time she received the letter.  She had seen his demonstration of how weaponized biological agents can disperse in air.  She even had her own vial of simulant as a reminder.  And yet, she “tried to dust off the powder that clung to my pants and shoes”?  This is the worst possible thing she could have done if the material in the letter had been real anthrax of the quality received by Daschle and Leahy, as it would have dispersed even more spores into air in an enclosed building.  Even if the emergency personnel who responded to the office hadn’t realized it, Miller should have known that her clothing should have been in the bag that was used to remove the letter and recovered powder.

Did Miller know  before she received it that her anthrax letter would be a hoax?

Oh, and one more point.  Miller noted that Patrick had told her that anthrax spore preparations are “almost never white”.  Here’s a photo of the white powder from the Leahy letter (the powder in the Daschle letter was identical) alongside the more yellow powder from the New York Post letter.  Miller published this account of the hoax letter on October 14, one day before the white powder in the Daschle letter was found.

So, yes, Judy and Bill, anthrax spore preparations are “almost never white”, but when they are, it’s pretty darned important.