If Domestic Drones Are All Civil, Then Why Are They in the Defense Authorization, Too? 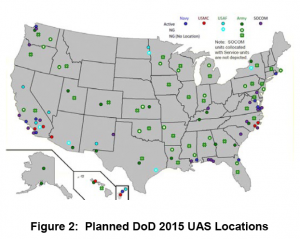 (3) coordinate with and leverage the resources of the Department of Defense and the National Aeronautics and Space Administration;

Furthermore, the most public discussion of one of these test sites involves Reapers flown by the Air National Guard, though they would only be armed over Fort Drum.

Hancock Field, which will eventually host a full squadron of Reaper drones, has the largest potential training space in the Northeast. Most of the drones assigned to the 174th Fighter Wing are now remotely operated in Afghanistan and Iraq by pilots at the Mattydale base.

The drones would be armed with live ordnance only when used at firing ranges at Fort Drum near Watertown.

Is Wittes really suggesting that these Reapers are “crop dusters” or “journalists”?

More direct still is this 2010 DOD report (from which the map above derives) describing the urgency behind the operation of “public” drones in US airspace.

Unmanned aircraft of the Department of Defense (DoD), Department of Homeland Security (DHS), and National Aeronautics and Space Administration (NASA) have a need for safe and routine access to U.S. airspace in order to execute a wide range of missions including surveillance and tracking operations, training, test and evaluation, and scientific data collection. UAS are already a significant part of DoD, DHS, and NASA operations and will eventually require U.S. National Airspace System (NAS) access similar to manned aircraft.

In addition to “real world training” in US airspace, the report anticipates drones will conduct missions for NORTHCOM.

The DoD needs to be able to respond rapidly to operational tasking, typically from a COCOM such as the United States Northern Command (NORTHCOM). Many of these tasked missions relate to homeland defense, homeland security, and defense support to civilian authorities. This includes border and port surveillance, maritime operations, counter-drug operations, and disaster or special event support.

I guess Wittes thinks these all amount to more crop dusting, too?

And that’s all before you get to DHS’ use of drones to “accomplish persistent border and maritime surveillance to detect, interdict and prevent acts of terrorism and the unlawful movement of people, illegal drugs and other contraband toward or across the borders of the United States.” That is, similar to functions the drones are doing on Afghanistan’s border (or Turkey’s). More crop dusting.

I could go on with more and more evidence that domestic drones are–in very significant part–about DOD’s drones or DHS drones operating in a counterterrorism or counternarcotics mission.

Which is all a very long-winded way of saying it isn’t the drones that are crop-dusting. It’s Wittes himself.