Fat Al Gore Determined to Strike in US 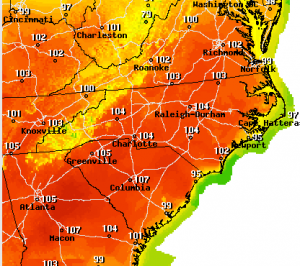 Already, at least ten people were killed in yesterday’s “derecho”–the massive, violent thunderstorm that traveled from Illinois to DC. That’s before the 3 million people who lost power now trying to cope with today’s 100+ degree weather. Reported gas shortages may exacerbate the challenges.

We haven’t seen this many records broken since 1936 brought the Dust Bowl.

Then, of course, there’s Colorado burning, where high heat and winds have turned normal summer fires into a catastrophe.

I joke with my use of “Fat Al Gore” to personify the growing evidence of climate change that conservatives mock by calling the former Vice President fat. But this is getting to a point where the terror industry and the homeland security industry, generally, needs to come to grips with the fact that the biggest immediate threat to the “homeland” is not terrorism or drugs or even hackers, but climate change.

Last summer we lost around 400 people and several towns to tornadoes. This weekend, our nation’s capital and the states surrounding it are facing the same kind of challenges they might be in case of a terrorist attack or utility hack, along with dangerous heat as an immediate threat.

And yet our country is still treating this urgent threat by dismissing those calling for immediate action. “You’ve covered your ass now, let me go back to drumming up other threats.”