And They’re Off! 4 GOPers Make Bid for 2016 Over Mitt’s Still-Warm Body 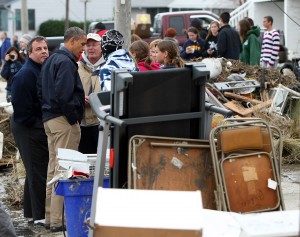 I’m not really sure why the pundits are wasting time deciding whether Nate Silver is a wizard or a washed out baseball junky. There’s another fairly clear sign that insiders believe Obama will win this election: the number of 2016 GOP contenders who are shifting into campaign mode.

Chris Christie can be forgiven for boosting up Obama’s image as President the last week of the campaign. After all it makes him look Presidential. More importantly, it’ll ensure NJ gets lots of quick federal attention. (Though it did remind me that Christie used his coming out party at Mitt’s RNC to talk about Chris Christie.)

Jeb! was a bit more circumspect, spending a Mitt campaign appearance bitching that Obama blames his brother for … things his brother did.

“His entire strategy is to blame others — starting with my brother, of course,” Bush said during a campaign rally for Mitt Romney in Coral Gables, Fla. “Basically, he blames every possible thing rather than having the humility to be able to reach out and to find common ground.”

But the most amusing bid for the 2016 front-runner position comes from Paul Ryan’s unnamed backers (though Governor Kasich is quoted by name) inventing reasons why Ryan wouldn’t fulfill the other position he’s running for (Congressman)–including that his newfound popularity would fracture the Republican caucus or that Democrats would make him cast difficult votes. So, these anonymous advisors say, Ryan should instead write a book or become a Professor or lobby or think tank.

Anything for an opportunity to make public use of PowerPoint.

That is why some of Ryan’s biggest boosters are considering whether it wouldn’t be better for Ryan to resign from the House. He could write a book — “saving America” is a theme often bandied about — or teach at a university.

After all, on the campaign trail, Ryan is as much lecturer as campaigner. Aides routinely set up giant video screens so Ryan can use visual aids to walk audiences through the minutiae of budget politics. Graphs and charts are as common as yard signs and American flags at some events, with Ryan settling into his role as explainer in chief.

Yet curiously, those aides mention a 2016 Presidential bid at least 4 [Update–oops! 5] times in the article.

…biding his time until a presidential run of his own.

a leading White House contender in 2016…

…forcing him to take sides on measures that could come back to haunt him during a presidential bid.

Ryan’s allies aren’t ruling out a bid for the top spot for their friend.

5 mentions of the next Presidential cycle, about a guy who’s on the ticket for this cycle.

And finally there’s this “accidental” email sent by Newt’s people:

“The truth is, the next election has already been decided. Obama is going to win. It’s nearly impossible to beat an incumbent president,” advertiser Porter Stansberry wrote in the email to Gingrich supporters. “What’s actually at stake right now is whether or not he will have a third-term.”

You gotta get an early start, I guess, if you’ll be 73 when you run again.

It’s all rather ghoulish, this campaigning to take over Mitt’s position as the party’s standard bearer before the race has even been called.

I don’t feel all that bad for Mitt, though. After all, he has participated in the weird custom of posthumously baptizing people, basically converting people after they’re dead. Republicans, apparently, follow the opposite strategy, burying you while you’re still technically alive.