John Bogdan: The Face of the Guantanamo Crackdown 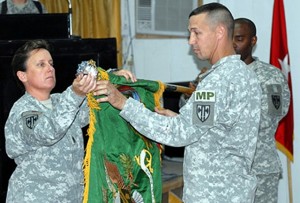 John Bogdan as his 95th Military Police Battalion assumed command of Forward Operating Base Rustimayah in Baghdad in November, 2007.

In yesterday’s pre-dawn hours, the guard force at Guantanamo entered the Camp 6 communal area and removed the prisoners to individual cells. Here is Carol Rosenberg’s description of the operation (emphasis added):

U.S. forces raided Guantánamo’s showcase prison camp early Saturday, at times battling with detainees, to systematically empty communal cellblocks in an effort to end a three-month-old protest that prisoners said was sparked by mistreatment of the Quran, the military said.

“Some detainees resisted with improvised weapons and, in response, four less-than-lethal rounds were fired,” according to a statement issued by the prison camps at the U.S. Navy base in Cuba. “There were no serious injuries to guards or detainees.”

The pre-dawn operation took place hours after delegates of the International Committee of the Red Cross left the remote island prison and during a blackout of news media access to the crisis in the prison camps.

The worst injury involved a rubber pellet piercing a captive’s “flank,” said Army Col. Gregory Julian at the U.S. Southern Command, which has oversight of the prison camps operation. The captives resisted the assault with broom and mop handles as well as plastic water bottles that had been wrapped and modified into clubs, he said.

Note how the military waited until after the ICRC had left Guantanamo (and after the ICRC’s president met with Barack Obama) to make this move while there were also no press present at the compound. I have noted previously how the military’s actions and statements during the hunger strike appear to have been an information operation and this move fits that description exactly.

When the military cancelled commercial flights to Guantanamo, I speculated on whether the new commander of Joint Task Force Guantanamo, John Smith, who took over in June of 2012, was responsible for the change in atmosphere there. It appears that the defense attorneys feel that more of the blame for deteriorating conditions should lie with John Bogdan, who is Commander of the Joint Detention Group (alternately described as the warden, he is in charge of the guards). See, for example, this parenthetical statement in an Andy Worthington post describing information he got from Shaker Aamer’s attorney:

The Colonel is, presumably, Army Col. John Bogdan, who took over as the commander of Joint Task Force Guantanamo’s Detention Group in June 2012, and is blamed for the aggressive cell searches that triggered the hunger strike.

Also, defense attorney H. Candace Gorman, in a comment on my post about the ICRC visit to Guantanamo, informed us that Smith is to be replaced, but wondered if “the next guy will be just as unable to rein in Bogdan”.

Where does Bogdan come from? As the photo above shows (source is here), he did a tour in Iraq commanding the 95th Military Police Battalion just outside Baghdad beginning in November, 2007. A profile written a couple of months into that tour has him spouting platitudes about training that sound like they were taken directly from David Petraeus’ September, 2007 testimony when Petraeus was given a free pass by Congress to re-start the training that had failed spectacularly in the previous attempt:

Iraqi police have made a “quantum leap forward” the last five years and sit on the cusp of taking the lead for all security matters in east Baghdad, the 95th Military Police Battalion commander said.

Actually getting there is proving more elusive.

Lt. Col. John Bogdan said recruiting remains a top priority, but Iraqi police stand fully trained and functional in the area, where the 95th is working to build 50 stations scattered over an expansive 295 square miles.

“The end-state objective is [for us] to slowly phase away and let the ISF (Iraqi security forces) take the lead, instead of being over their shoulder all the time,” said Bogdan, 42, of Richmond, Va. “I’m not sure that can happen in our tour here, but it’s what we’re trying to achieve.”

One statement from Bogdan, however, really set off my radar:

Oh my. It appears that Bogdan picked up more than just platitudes about training from the Petraeus model. Recall that as the Guardian pointed out, death squads in Iraq were formed when the US chose to support Shia militia groups. The article from which I took the Bogdan quotes does also mention the role of religion, so the “concerned local citizens” on whom Bogdan relied look like very good candidates for Iraqi death squads.

Note also that the Guardian article on formation of the death squads puts the start of that activity in 2003 and 2004. Bogdan’s tour of duty in Iraq described above was actually the second tour for the 95th Military Police Battalion. They also were deployed to Iraq for a tour that began in February, 2004. I have no direct evidence that Bogdan took part in that deployment, but the odds seem very high that he did. At the very least, there would have been enough institutional memory in the 95th for the reliance on private militias to be implemented just a few months into the second deployment.

Bogdan’s assignment to Guantanamo, like Smith’s, also began in June, 2012. It appears to me that if the Obama administration intends to ease the tensions at Guantanamo, replacing Bogdan should be high on their list of steps to implement. Otherwise, Obama is likely to get more unpleasant visits from Peter Maurer, as the Washington Post informs us that:

The Red Cross said in a statement Saturday that it “continues to follow the current tensions and the hunger strike at Guantanamo very closely and with concern.”

For a group that is supposed to be as neutral as the ICRC, that’s a really damning statement.