I’m not all that interested in the debate about offering Edward Snowden some kind of amnesty, as I think he could never accept the terms being offered, it arises in part out of NSA’s PR effort, and distracts from the ongoing revelations.

But I am interested in this. Amy Davidson wrote a column refuting Fred Kaplan’s assertion that because Snowden “signed an oath, as a condition of his employment as an NSA contractor, not to disclose classified information,” comparisons with Jimmy Carter’s pardon for draft dodgers are inapt. She notes (as a number of people have already) that the only “oath” that Snowden made was to the Constitution.

To begin with, did Snowden sign “an oath…not to disclose classified information”? He says that he did not, and that does not appear to have been contradicted. Snowden told the Washington Post’s Barton Gellman that the document he signed, as what Kaplan calls “a condition of his employment,” was Standard Form 312, a contract in which the signatory says he will “accept” the terms, rather than swearing to them. By signing it, Snowden agreed that he was aware that there were federal laws against disclosing classified information. But the penalties for violating agreement alone are civil: for example, the government can go after any book royalties he might get for publishing secrets.

Snowden did take an oath—the Oath of Office, or appointment affidavit, given to all federal employees:

I will support and defend the Constitution of the United States against all enemies, foreign and domestic; that I will bear true faith and allegiance to the same; that I take this obligation freely, without any mental reservation or purpose of evasion; and that I will well and faithfully discharge the duties of the office on which I am about to enter. So help me God.

Now, some would argue—and it would have to be an argument, not an elision—that he violated this oath in revealing what he did; Snowden told Gellman that the revelations were how he kept it—protecting the Constitution from the officials at the N.S.A., which was assaulting it. Either way this is just not an oath, on the face of it, about disclosing classified information. [my emphasis]

Former Obama DOD official Phil Carter then attempted to refute Davidson on Twitter. He did so by pointing to the “solemnity” of the forms Snowden did sign, and then noting such “promises are far more legally enforceable than an ‘oath’ of office.” 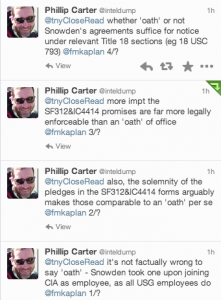 I don’t dispute Carter’s point that nondisclosure agreements are easier to enforce legally than an oath to the Constitution. And, as noted above, in her original piece Davidson admitted that Snowden had acknowledged there were laws against leaking classified information. No one is arguing Snowden didn’t break any laws (though if our whistleblower laws covered contractors, there’d be a debate about whether that excuses Snowden’s leaks).

Nevertheless, Carter’s comment gets to the crux of the point (and betrays how thoroughly DC insiders have internalized it).

We have an ever-growing side of our government covered by a blanket of secrecy. Much of what that secrecy serves to cover up involves abuse or crime. Much of it involves practices that gut the core precepts of the Constitution (and separation of powers are as much at risk as the Bill of Rights).

Yet we not only have evolved a legal system (by reinforcing the clearance system, expanding the Espionage Act, and gutting most means to challenge Constitutional violations) that treats crimes against secrecy with much greater seriousness than crimes against the Constitution, but DC folks (even lawyers, like Carter) simply point to it as the way things are, not a fundamental threat to our country’s government.

That plight — where our legal system guards this country’s “secrets” more greedily than it guards the Constitution — is the entire point underlying calls for amnesty for Snowden. He has pointed to a system that not only poses a grave threat to the Bill of Rights, but just as surely, to separation of powers and our claim to be a democracy.

Moreover, those who (like Carter) point to our failed branches of government as better arbiters of the Constitution than Snowden ignore many of the details in the public record. Just as one example, David Kris has suggested that the entire reason Colleen Kollar-Kotelly wrote a badly flawed opinion authorizing the Internet dragnet was because George Bush had created a constitutional problem by ignoring Congress’ laws and the courts.

More broadly, it is important to consider the context in which the FISA Court initially approved the bulk collection. Unverified media reports (discussed above) state that bulk telephony metadata collection was occurring before May 2006; even if that is not the case, perhaps such collection could have occurred at that time based on voluntary cooperation from the telecommunications providers. If so, the practical question before the FISC in 2006 was not whether the collection should occur, but whether it should occur under judicial standards and supervision, or unilaterally under the authority of the Executive Branch. [my emphasis]

And while Kris argued Congress’ subsequent approval of the dragnets cures this original sin, the record in fact shows it did so only under flawed conditions of partial knowledge. Of course, these attempts to paper over a constitutional problem only succeed so long as they remain shrouded in secrecy.

That the first response of many is to resort to legalistic attempts to prioritize the underlying secrecy over the Constitution raises questions about what they believe they are protecting. The next torture scandal? Covert ops that might serve the interest of certain autocratic allies but actually make Americans less secure? The financial hemorrhage that is our military industrial complex? The sheer ignorance our bloated intelligence community has about subjects of great importance? Petty turf wars? Past failures of the national security system we’re encouraged to trust implicitly?

At some point, we need to attend to protecting our Constitution again. If Article I and III have gotten so scared of their own impotence (or so compromised) that they can no longer do so, then by all means lets make that clear by revealing more of the problems.

But we need to stop chanting that our Constitution is not a suicide pact and instead insist that our secrecy non-disclosure agreements should not be suicide bombs.