Yes, Verizon, We Can Hear You Now

Apparently, James Clapper does not believe the information in the screenshot to the right to be classified. The name, Verizon, was left unredacted in one of the Primary Orders released last Friday (the one dated January 20, 2011). (h/t Michael)

The paragraph is boilerplate that appears, in some form, in all the Primary Orders for the phone dragnet. I had always thought the word behind the redaction was something like “the telecoms.”

(See below for an updated explanation: they just broke out Verizon into it’s own paragraph to limit any collection from their foreign metadata. I assume the earlier paragraph applies to the other providers.)

Now, I’m not sure what this means (I’ve got some theories, but I’m still mulling them), but it may explain why NSA Review Group member Geoffrey Stone has claimed the government get substantially less than 75% of all US traffic, but DOJ keeps telling courts that they get the whole haystack of phone records in the US. Verizon’s traffic, by itself, doesn’t constitute 75% of US traffic. But its circuits would have access to far more than just Verizon traffic. (A whistleblower has described  a wide-open Verizon circuit at Quantico.) 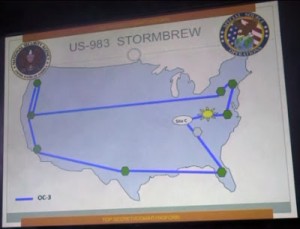 Remember, contrary to the “Business Records” moniker, the records the NSA collects are not real billing records for much of the telecom traffic; no one has to bill for local calls for land lines, after all. So at least some of what the government obtains must be created for it. But it’s possible that Verizon strips some portion of the nation’s call metadata as it traverses its backbones.

Furthermore, if Verizon provides all this data, it explains why the providers are balking it retaining the dragnet data themselves. Not only would Verizon have to store far more than they currently do (they don’t store as much as AT&T), but it would have to fiddle with the dragnet data of other carriers, including performing the data integrity role that gives direct access to raw data.

In any case, if Verizon is still the sole provider of this dragnet data, it means it may be easier to force the end of its collection.

Update: Okay, I think I have an explanation for this now.

Up until at least March 5, 2009, all the telecoms were addressed in one paragraph starting, “the Custodian of Records.” Starting on May 29, 2009, that’s split out into two paragraphs, with the original Custodian of Records paragraph and the one we know to be specific to Verizon. We don’t have the following order, dated July 8, 2009, but we know that order shut down production from one provider because it was also producing foreign-to-foreign data; that production was restarted on September 3, 2009.

So what appears to have happened is in the End to End review, they realized that Verizon was also turning over foreign data (perhaps from Vodaphone?); this apparently was a big problem, but I’m not sure why. So they appear to have recognized they had to specify that they didn’t want (I’m guessing) Verizon’s foreign call data, at least not this way.

I assume the other paragraph names AT&T and TMobile or something like that after all.