Is There a 702 Certificate for Transnational Crime Organizations?

Update, 9/8/15: We’ve subsequently learned that in 2015, the third certificate in 2011 was a vaguely defined “foreign government” one, which has been used very broadly (and lied about by the government on multiple occasions). NSA was contemplating a cyber certificate in 2012, but Bates’ 2011 decision may have made the terms of that difficult.

I joked yesterday that James Clapper did no more than cut and paste to accomplish President Obama’s order of providing a list of acceptable bulk collection. But I’d like to note something about the list of permissible uses of bulk collection.

For months, I have been noting hints that the use of Section 702 — which is one of several kinds of domestic bulk collection — is limited by the number of certifications approved by FISC, which might be limited by FISC’s assessment of whether such certifications establish a certain level of “special need.”

In 2011, it seems clear from John Bates’ opinion on the government’s Section 702 applications, there were 3 certifications. 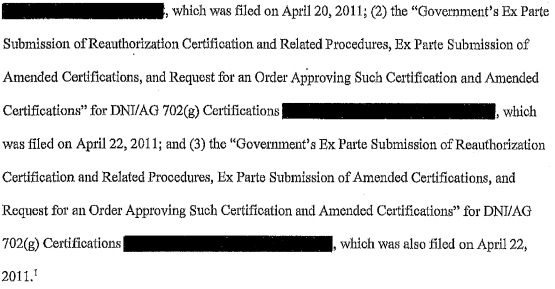 If there are just 3 certifications, then it seems clear they cover counterterrorism, counterproliferation, and cybersecurity (which is consistent with both ODNI’s public descriptions of Section 702 and the Presidential Review Group’s limits on it), 3 of 6 of the permitted uses of bulk collection.

Furthermore, there’s some history (you’ll have to take my word for this for now, but the evidence derives in part from reports on the use of National Security Letters) of lumping in Counterintelligence and Cybersecurity, because the most useful CI application of bulk collection would target technical exploits used for spying. So if that happens with 702 collection, then 4 of the 6 permissible applications would be covered by existing known certifications.

Threats against Armed Forces would, for the most part, be overseas, suggesting the bulk collection on it would be too. (Though it appears Bush’s illegal program used the excuse of force protection to spy on Iraqi-related targets, potentially even in the US, until the hospital confrontation stopped it.)

Which leaves just transnational crime threats — against which President Obama rolled out a parallel sanctions regime to terrorism in 2011 (though there had long been a regime against drug traffickers) — as the sole bulk collection that might apply in the US that doesn’t have certifications we know about.

Given that at least drug cartels have a far more viable — and deathly — operation in the United States than al Qaeda, I can’t think of any reason why the Administration wouldn’t have applied for a certification targeting TCOs, too (one of Treasury’s designated TCO targets — Russian and East European mobs — would have some overlap with the cyber function, and one — Yakuza — just doesn’t seem like a big threat to the US at all).

And last year’s Semiannual Compliance Assessment may support the argument that there are more than 3 certificates. In its description of the review process for 702 compliance, the report lays out review dates by certifications. Here’s the NSA review schedule:

This seems to show 4 lines of certifications, one each in August and December, but two in October. Perhaps they re-review one of the certifications (counterterrorism, most likely). But if not, it would seem to suggest there’s now a 4th certification. 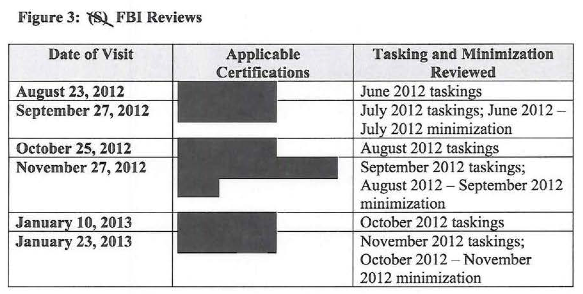 Given that this requires manual review, I wouldn’t be surprised if they repeated the counterterrorism certifications review (and we don’t know whether all the NSA certifications would be used by FBI). But the redactions would at least allow for the possibility that there is a 4th certification, in addition to the 3 we know about.

Perhaps Obama rolled out TCOs as a 4th certification as he rolled out his new Treasury initiative on it (which would be after the applications laid out by Bates).

Of course, we don’t know. But I think two things are safe to say. First, the use of 702 is tied to certifications by topic. And the public statement about permissible use of bulk collection, it would seem to envision the possibility of a 4th certification covering TCOs, and with it, drug cartels.