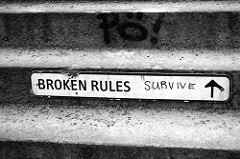 The post-holiday season debris field continues to thin out, making its way by the truckful to the landfill. I wonder how much oil the season’s plastic wrappings consumed.

Here’s what the trash man left behind this morning.

Hackers caused power outage — the first of its kind?
Marcy’s already posted about the electrical power disruption in Ukraine this past week, labeled by some as the first known hacker-caused outage. I find the location of this malware-based outage disturbing due to its location in western Ukraine. Given the level of tensions with Russia along the eastern portion of the country, particularly near Donetsk over the past couple of years, an outage in the west seems counterintuitive if the hackers were motivated by Ukraine-Russian conflict.

And hey, look, the hackers may have used backdoors! Hoocudanode hackers would use backdoors?!

Fortunately, one government is clued in: the Dutch grok the risks inherent in government-mandated backdoors and are willing to support better encryption.

‘Netflix and chill’ in a new Volvo
I’ve never been offered a compelling case for self-driving cars. Every excuse offered — like greater fuel efficiency and reduced traffic jams — only make greater arguments for more and better public transportation.

I’m not alone in my skepticism. I suspect Isaac Asimov is rolling in his grave.

US Govt sues pollution-cheater VW — while GOP Congress seeks bailout for VW
WHAT?! Is this nuts or what? A foreign car company deliberately broke U.S. laws, damaging the environment while lying to consumers and eating into U.S.-made automotive market share. The Environmental Protection Agency filed suit against Volkswagen for its use of illegal emissions control defeat systems. The violation of consumers’ trust has yet to be addressed.

Thank goodness for the GOP-led House, which stands ready to offer a freaking bailout to a lying, cheating foreign carmaker which screwed the American public. Yeah, that’ll fix everything.

Remember conservatives whining about bailing out General Motors during 2008’s financial crisis? All of them really need a job working for VW.

Except that 191 million voters is more than the number of people who cast a vote in 2012 or even 2008 presidential elections. This database must represent more than a couple election cycles of voter data because of its size — and nobody’s responding appropriately to the magnitude of the problem.

Nobody’s owning up to the database or the problem, either.

Here’s a novel idea: perhaps Congress, instead of bailing out lying, cheating foreign automakers, ought to spend their time investigating violations of voters’ data — those folks that put them in office?

Any member of Congress not concerned about this breach should also avoid bitching about voter fraud, because hypocrisy. Ditto the DNC and the Hillary Clinton campaign.

Whew, there it is, another mark on the 2016 resolution checklist. Have you checked anything off your list yet? Fess up.