Looks like it’s going to be a thing this week, covering women in sports. This is a marvelous example of covering a female competitor, this short film profiling U.S. Women’s Individual Foil fencer Nzingha Prescod — it’s about her and her approach to her sport, period. Does she sound like somebody who doesn’t care about the results of competition, like she’d rather have narrative surrounding it?

Her next match is tomorrow at 8:10 a.m.; I wish I could catch it live online. 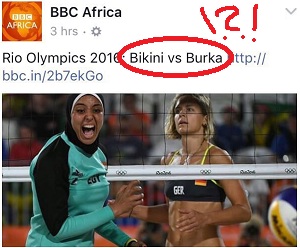 [Journalism 101 fail again — who are these competitors and what country do they play for? Which sport is this?]

Another example of crappy coverage comes from BBC — can’t imagine why the UK became so white nationalist, can you? Let’s not note the countries or the individual competitors, let’s point out their attire and hint at religious and political positions at the same time. What garbage.

If you’re not already familiar with ‘male gaze‘, it’s time for a primer on this concept first theorized 41 years ago by Laura Mulvey. I don’t know if I can even call it purely feminist theory any longer though it arose because of feminism’s emergence. The way content is constructed can be political, and the way we view it can also be political; if content can be constructed for the male gaze, it can also be constructed to perform for political ideology. What we see in the BBC’s photo is both a political and sexist statement — the bikini-clad woman preferred over the fully-clothed woman whose attire has been mislabeled (it’s not a burka), the lack of identity in either case. These women are figures to be looked at for visual enjoyment and not in a manner which satisfies women but a male gaze with a particular ideological slant.

The problem with NBC’s constructed Olympic coverage is that the corporation believes it has created a ‘female gaze’ product — but women don’t feel immersed in the sports they are watching, continually disrupted by the inauthenticity of the content they are viewing. It feels forced, like we are supposed to care about the content presented apart from the actual sports on the screen based on a third (and likely straight male) party’s expectations of the female audience, but the mediation and curation process interfere with our autonomy in viewing. We feel a jarring disconnect from a state of attentive viewing into a state of critical viewing — we’re left unsatisfied.

I don’t think men are feeling any better about the content they are seeing because it fails to serve their gaze in a manner which they have always expected from the male-led sports and entertainment industries.

It’s so damned easy to fix, too.

The one entity finding a silver lining in NBC’s coverage of the Olympics? Netflix, which blames flat subscriber growth on the games’ broadcast. Hard to argue with this based on anecdotal evidence; everybody who ordinarily binges on Netflix programming and shares the experience in social media during cooler months is now complaining about NBC’s programming.

One for the road
Looks like the FBI hasn’t found an app for that yet — remote surveillance on smartphones, that is. Isn’t that interesting?

Off to cook dinner before the nightly Olympic debacle begins. Wonder what fresh hell the taped delayed coverage will bring?