The Surrealist artist Salvador Dali, whom you may know best for his quirky mustache and his painting featuring melting clocks, once said:

What is important is to spread confusion, not eliminate it.

Apropos, when one thinks of Surrealism as a rebellious response to predictable and rigid political dogma up to and after World War I.

Trump has indulged in surrealism throughout the last six months in office, breaking expected and legislated norms of behavior. Some of this is a deliberate effort to effect change on our government; some of it is gaslighting, to force us to look at everything differently, suspiciously, to doubt ourselves.

And some of it is simply ass covering, hiding beneath a fog of bullshit. 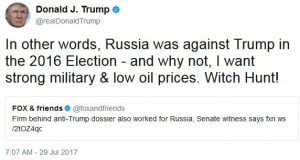 This looks like part of a new strategy, to appear as if he is not and has not been sympathetic and in sync with Russia’s Putin.

Such a strategy can explain the tenuous stance on Congress’ latest Russian sanctions bill. Trump hasn’t fully committed to signing the bill; as it was passed on July 25, the bill may be pocket vetoed depending on when Congress decides to go on August break. Trump dragged his feet for a week before signing the bill today with a whiny signing statement expressing concerns about the sanctions.*

But buried in that tweet is an effort to undermine the Steele dossier by replying on Fox News to attack the consulting firm which contracted the dossier’s production. Trump himself doesn’t mention Fusion GPS nor even the dossier, but relies on the narrative Fox pushes that morning to speak for him.

Fox News’ article discusses hedge fund manager Bill Browder’s testimony before the Senate Judiciary Committee in relation to the Foreign Agents Registration Act. He testified on July 26 about Sergei Magnitsky, Russia’s corruption, and the Magnitsky Act; in his written statement published the previous day as well as during his testimony (video), he shared that Fusion GPS had been contracted to work against the Magnitsky Act.

This is the point which is pushed by Fox, indirectly by Trump — that Fusion GPS worked for the Russians.

We’re meant to question Fusion’s agenda; we’re meant to believe the talking point sown about that Hillary Clinton and the Democrats were working with the Russians to undermine Donald Trump.

The poisoning of Fusion’s image doesn’t originate just from Trump or Fox News as quasi-state media.

The GOP jumped into this by posting a so-helpful page about Fusion on July 25 — the same day Browder’s written statement was published, days before Trump would make a veiled allusion to Fusion’s agenda.

Which should tell us not to put any faith in GOP members of Congress doing the right thing based on how deeply the party is committed to protecting Trump’s butt.

Although the GOP may also be protecting more than Trump by poisoning Fusion’s reputation. Fusion was originally hired to do opposition work on Trump — but they were hired to do so by a Jeb Bush supporter. Though the Democratic side of the presidential race eventually had interest in Fusion’s opposition research, the work began during the GOP primary race.

The trail to the funder(s) has been conveniently fuzzed. The BBC first reported Jeb Bush or his campaign hired Fusion, but a vigorous denial and a take-down demand changed reports to say that “unidentified Republicans” were responsible for employing Fusion to do anti-Trump opposition work.

The distancing continued with claims Hillary Clinton and/or the Clinton campaign hired Fusion, though it appears the truth is closer to “Democratic supporters” did so after Trump became the GOP’s presumptive nominee in spring 2016.

“Democratic supporters” doesn’t rule out anti-Trump members of the GOP who crossed the aisle and threw behind Clinton last year.

This may explain why the GOP has been working for some time on linking Fusion to Clinton so tightly — well before Browder’s testimony last week. The party is protecting someone(s) in their ranks from not only the Trump-Russia investigation, but Trump and Russia.

There was one other witness who testified before the Senate last week who spoke of Fusion GPS. It’s telling that Trump, Fox News, other right-wing media like the Weekly Standard, and the GOP have avoided mentioning this second witness.

Venezuela is and has been in a deep state of turmoil for several years; the corruption the U.S. hasn’t read about exacerbates Venezuela’s condition. Its political crisis has finally cracked the news here, and in part because of the Trump administration’s sanctions against its leadership and the amount of Venezuelan oil products the U.S. consumes. The rise in gasoline and oil prices over the last two months may be related in part to market volatility because of Venezuela’s crisis.

And while Venezuela may be sitting on a very large oil reserve, so is Russia and whomever now owns that 19.5% share of Russia’s largest oil company, Rosneft. The fortunes of GOP investors who own shares in or entire businesses related to oil production and processing also benefit from the increase in oil prices, profits from which may help fund the GOP and its candidates. It’s no wonder, then, the GOP and right-wing media focus on tying Fusion to Clinton and Russia in any way possible while avoiding Fusion’s work related to Venezuela.

So who does Fusion really work for?

As far as I can tell, any political entity with the money to hire their services. This is the best explanation for Fusion’s Glenn Simpson refusal to testify publicly before the Senate — they are competitive intelligence and media guns for hire, and asking them to disclose who hired them in public would damage their ability to contract freely with whomever approaches them, whether Republican, Democrat, or neither in the case of corporations.

There is one other point the Trump-GOP-Fox-right-wing media can’t adequately obscure, though they have done what they could to damage Fusion’s image.

Last summer, after gathering intelligence about Team Trump’s ties to Russia, the former MI6 officer was so concerned about his findings that he approached the FBI to share what he found.

It’s both strange and interesting that the Trump-GOP-Fox-right-wing media smear campaign against Fusion hasn’t mentioned this.

_________
* The sanctions bill was signed while I was in the middle of writing this. I can’t write fast enough to keep up with the crazy.