In 8 minutes, 18 seconds light travels from the sun to Earth. In that time, roughly 25 million in national debt accrues. Somewhere around 157,806 tonnes of CO2 is released into the atmosphere. 113,046 years of global human experience goes by in 8 minutes, 18 seconds. Around 900 people die — a Jonestown Tragedy, if such a thing could be a unit.

Here is how to make the modern world:

Begin with light, born billions years ago at the heart of the sun. It wanders for untold time around the vast interior of our star, bumping into this and that in a world of unfathomable heat and pressure. A very small bit of that light, called a photon, meanders its way slowly past the solar surface, and starts a frenetic journey 93 million miles aimed at us. It experiences no time in all of its existence, but for us, it takes 8 minutes and 18 seconds to reach the atmospheric skin of our world. It avoids scattering in our atmosphere, or bouncing off the water back into space, or striking dead land, and instead falls on the outstretched leaf of a plant. Plants have always been the mechanism of transformation, the way sunlight energy is banked on Earth. Photosynthesis absorbs the moment of light out of the free flight between worlds and turns it into a chemical instrument.

Take crushed Jurassic ferns, the algae, the microscopic floating forests and creatures of the Devonian sea, the Carboniferous forest, and everything since, save them from being eaten by bacteria. Cook and compress them for an incomprehensible time under geologic weight, stored deep underground. Strings of hydrocarbons in their decayed bodies draw together into tighter, longer, and more pure clumps of blackened sunlight. This is fossil fuel, the borrowed and condensed light energy of past eons. Let it rest for hundreds of millions of years.

Wait for the rise of humans, who search out this stuff with an insatiable lust. And the rest — our civilizations, the mechanisms of our lives, from the machines of the industrial revolution to the construction of the LA freeways, the painting of Guernica, landing on the moon, and the building of Beijing — all of that happens in a geological eye blink.

For a half a billion years the Earth banked sunlight this way,letting the corpses of fallen life slowly simplify towards being only: hydrogen, surrounding and bound to carbon, and the energy of the sun thusly contained. It seems simple, but there’s a reason societies are addicted to it, it’s amazing stuff. The energy density of fossil fuel is such that a teaspoon could run an iPhone for a couple of months. We stare impatiently at a pump, tap our feet, glance at the time, while moving more energy in 3 minutes than our ancestors would harness in their lives. We are greedy for this energy. We use our best science to pull it out of the ground, borrowing the past’s light to make more of our world, and more of us to inhabit it. We betray each other for it, kill each other, despoil our land and sea for it. Dale Pendell, the mad and brilliant philosopher/poet of drugs, commented on fossil fuels in his book Pharmako/Poeia, namely, the practice of huffing them. In all of his Pharmako series, spanning a range of drugs that baffle, bless, and destroy the mind, the fumes of fossil fuels were the only substance he ever seemed to condemn. Whatever the high may be, he explained the practitioners of huffing don’t have the faculties left to speak of it. Fossil fuels, the normally ecumenical Pendell explained, always lead to irrevocable destruction of mind and body.

But if we are addicted to this thing that kills us, what we do with it is amazing too. We make the old sunlight into batteries, light and light switches. We move giant steam turbines with it. Plastic is made of ancient sunlight. We use it to make fertilizers and feed billions. We pour it into planes, we spoon it into our children’s mouths, we cover their heads with Devonian sunlight to keep their skin safe from new sunlight. The way we use fossil fuels is very human; we have always burned the past to make the future. But we didn’t create this situation, we found it. We can’t create or destroy anything in this equation; we move it around to the benefit and detriment of the momentarily extant creatures. The past Earth is our creditor, with the constant and rich deposits that got us into this mess. The Earth built this wealth for billions of years. Then we came along, the trust fund species that’s hooked, not listening, and blowing the family fortune on a suicidal bender.

Though as an energy source unsustainable, the process by which nature banks energy is by no means halted. Undoubtedly with the passage of sufficient time, plenty of our bodies, our children, dogs, cats, and houseplants will become part of the rich, anonymous hydrocarbon slurry. There’s nothing we could do that would really change that in the long run. We’re just digging it up and burning it much faster than it forms.

We love to talk of innovation, consumption, excess, and even entitlement when it comes to our energy use. But in truth, physics puts us in our place. We will never create a technology that can consume or create energy, only ever more ways to move it around. With every move a price is paid to entropy, the ultimate accounting of loss, the ebbing away of vital heat. With every transformation of energy, Mr. Entropy takes his fee, and moves infinitesimally closer to the quietude of universal death. The tax he puts on fossil fuels is immense. 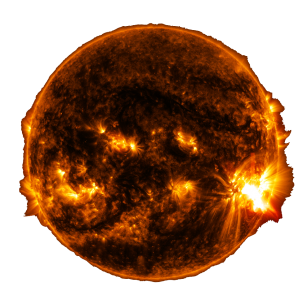 No one is sure how much biomass goes into the earth to become more fossil fuel these days, though as we deforest and burn the world, it lessens. It might be as much as Somalia’s energy use every year, around 200 gigawatts. Every year we take 12 terawatts back out of the earth, most of the energy use of everything else, according to Saul Griffith, a MacArther Genius and expert on energy generation and consumption. He has an air of palpable frustration when he talks about fossil fuels. “It’s absolutely a Ponzi scheme against our kids,” said Griffith.

Right now we act like we are desperately running out of cheap energy, and we fight like starved children over fossil fuel, while we are bathed so constantly in the raw energy that made it we can barely imagine it being useful. “There is a shitload more than we need. 86,000 terrawatts hit the surface every year, and we’re too stupid or too lazy to use it,” said Griffith. A single day’s light brings us around 48,000 times as much energy as we use that day.

We don’t capture much of it, and in America, little is planned to change that. Our energy infrastructure is 30, 40, or in some places, 50 years old, and often meant to be replaced a decade or more ago. As we extend the lifetime of those old plants, we artificially lower the cost of energy. “It’s an infrastructure debt we’re ignoring,” says Griffith, “You can only get this far into monetary debt by using energy badly.”

Through heroic measures we can change all this. For a mere 4 trillion dollars, says Griffith, we could achieve energy independence in America. That seems like a lot of money, and it is. But such an effort is not without precedent, if we eliminated fossil fuel subsidies and instituted a jobs program with the money saved, subsidized the education we need, we could be well on our way in a few years, gradually lessening our dose, taking in something more pure, more healthy.

The estimate for the world is much harder to get. Sampling between different countries’ studies on energy independence, and Mark Jacobson and Mark Delucchi’s plan for full renewables by 2050, it’s perhaps 80 to 100 trillion dollars. This is still a bargain, because we would still have a world we can comfortably inhabit. Money at this level is not a real thing. It’s just human time and resources, focused on a goal.

Building a new system of energy for the world is the work of a generational at least, but right now we are living through a global pandemic of unemployment, and in particular youth unemployment. They are the people with the most to lose in a future of energy crisis, climate change, extinction, and shitty air. Nearly 75 million young people are unemployed, a huge portion of them near the very deserts from where we could get our best solar energy.

We could use our last hit of fossil fuel to build a new energy miracle. We could clean up our mess, and employ our world in a meaningful shared project while we’re at it.

We could end the Ponzi scheme before it kills our children. We could bask in the sun without the 100 million year wait. The sun would support us, for billions of years, paying all of our bills. The sun could make us rich beyond our mere dreams. But we don’t, because we believe it’s too expensive, too unrealistic a project. As if the rest of this was realistic. We keep burning the trust fund while the world around us slowly dies of it, drowning in a poisonous soup of hot air and acid oceans. We are making a choice every day we wait, about who we are and what we choose to be. It’s a terrible choice, but not without its own glories.

At the end of his meditation on the huffing of fossil fuels, Pendall concluded: “The ecologist Howard Odum once quipped that the evolutionary purpose of human beings was to release all the carbon locked up under the ground back into the biosphere. If true, our mission will soon be accomplished. That it be a suicide mission in no way detracts from its grandeur or heroism.” Ours is an amazing suicide,  we’ve done so much so fast. I don’t, I can’t, regret that humanity has made civilization. But right now, it’s still a suicide mission.

In 8 minutes, 18 seconds, you can listen to most of American Pie. A person can walk .42 of a mile at a normal human pace. That person can look around them and see more energy falling on their world than they could use in their lifetime. In any 8 minutes, 18 seconds, waiting for the next rain of photons from the ever-giving sun, any one of us could decide this world is worth saving.

With much thanks to Simon Quellen Field