[NB: Whoops — forgot to remind readers to check the byline. This is the other pottymouth broad./ ~R]

Reports say that Vice President Pence and DHS Secretary Nielsen have been laying the groundwork for Trump’s speech tonight in which he is expected to complain about House Speaker Pelosi, Democrats, and the lack of funding for the goddamn wall he claimed Mexico would pay for while he campaigned in 2016. The word “crisis” was used 36 times.

Yet there’s no crisis at the border.

The State Department hasn’t published any documents or statements over the last two years indicating there was a crisis.

While talking about Trump’s speech today, Secretary of State Pompeo laughed — not exactly an indicator of crisis.

Bad numbers have been thrown around over the last couple of weeks, claiming that 4000 terrorists have been stopped at the border. Untrue: the number is somewhere between six and 12, and the designation “terrorist” is as specific as the No-Fly List. This means persons whose names match individuals who are under suspicion for political reasons — like musician Yusuf Islam, formerly known as Cat Stevens — may be the entirety of the 6-12 individuals stopped at the border. Hardly a crisis.

Secretary Nielsen can’t answer questions put to her by Congress about refugees at the southern border without prevarication; she can’t even say how many people, adults or children, have died in U.S. custody. Seems like a cabinet member would have accurate numbers at their finger tips in a genuine crisis.

That a handful of questionable individuals were halted at the border suggests the current system works. Not a crisis.

If funding has been the problem and the theater of angrily shutting down the government was intended to force funding approval, why didn’t the GOP fund it while they had a majority in the House? Why didn’t they fund it when they were in lame duck? Why didn’t they make a point of knocking down the massive tax cut by enough to fund the “fucken wall“?

If aliens breaching the border is a crisis, why were government services including border security shuttered at all instead of finding an alternative method for funding the wall?

And if aliens crossing into the U.S. was such an emergency, why did Trump’s campaign fund a broadcast TV ad placed during CBS’ 60 Minutes this past Sunday night, bashing Pelosi and the Democrats about wall funding?

Because the border hasn’t been and still isn’t a crisis; it’s a distraction from other issues Trump doesn’t want his base to notice. Because it’s a campaign issue that worked in 2016 with the same base eager to lap up his brand of white nationalist hate.

But you know what is a crisis?

Tens of thousands of Americans are dying every year from opioids and Trump has done dick-doodley-squat to work with Congress to shut down opioids. Oh, he’s talked about it? Great — a lot of useless hot air and fapping gestures made as Americans’ bodies pile up. 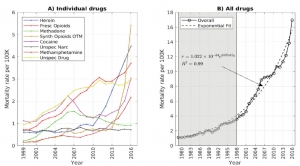 At least 42,000 Americans died from opioid overdoses in 2016. But no speech tonight about this real crisis.

Another crisis: the cost of insulin. People who can’t afford the outrageous prices are risking permanent disability and death by rationing their use below prescribed levels. Worse yet, some government employees, contractors, and their families may be going without insulin right now because they can’t afford it while they are going unpaid. Trump is courting Americans’ deaths for the manufactured wall crisis. 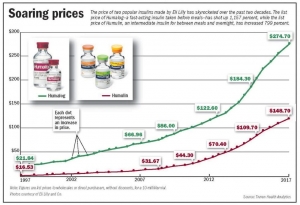 [Graphic: The Republic – note prices have only gotten worse since 2017.]

Another crisis being swept under the rug: the government’s gross negligence in responding to Hurricane Maria, resulting in thousands of Americans deaths, and the continued abdication of leadership on climate change, contributing to deadly conditions like California’s wildfires resulting in at least 100 deaths. Who is being held accountable for these fatalities as they mount? How many will die during the next climate change-caused catastrophe?

Who is being held accountable for all the other real crises, like multiple corrupt cabinet members, the collapse of ethics in the White House, the mounting risks to national security posed by officials handling sensitive matters without adequate clearance, or the loss of trust in the U.S. among allies whose relationships have been devalued?

There’s no crisis at the border, but there is a crisis. This country is lead by a lying malignant narcissist who can’t see anyone or anything except for himself; he refuses to accept responsibility and accountability. He is incapable of admitting failure, particularly his failure to uphold his oath of office. He swore to faithfully execute the laws but his manufactured border crisis ignores this very simple and straightforward one:

His trash talk bashing the press also violates the First Amendment of the Constitution, which he swore to uphold and defend.

There’s a crisis when broadcast media corporations — after refusing twice to allow the first black president to address the nation on immigration — have allowed themselves to be bullied in to airing pure propaganda.

The networks have in these decisions breached the contract they have as licensed broadcasters, obligated to serve the public interest; they do so with great bias for a man who is a noted racist, having shut out the only president of color on the same issue of immigration. They do so after Trump has encouraged violence against media and elected officials by calling them enemies of state, ultimately resulting in mass bomb and shooting threats.

These media outlets also ignore history — very specific history Trump knows quite well, having read Hitler’s speeches and understanding the aims of Germany’s 1933 emergency Reichstag Fire Decree and Enabling Act — by giving Trump a platform for untruths, defamatory content, and near incitement, none of which serves the public interests.

Lastly, the press also gives preference to an extortive demand for funding labeled by Trump as a crisis — neatly fulfilling Trump’s claim of fake news media — when the only genuine emergency at the border is two-fold: the ongoing violations of U.N. treaties on refugees and human rights, resulting in the deaths of children and adults alike, and the suspension of government services which include border security.

Manafort’s Redaction Fail Tells Trump that Mueller Caught Him Lying about... Manafort Claims He Can’t Be a Witness to Trump’s Conspiracy with...