On the Matter of Mitch: Perhaps Not Where but Why 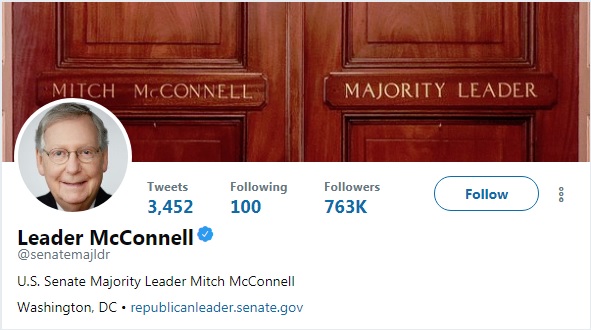 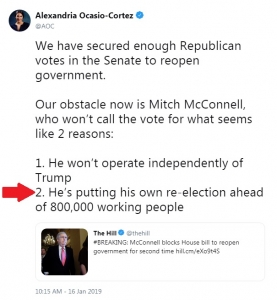 This tweet may have prefaced the viral search that followed for the current Senate Majority Leader, earmarked with the hashtagged question, #WheresMitch.

If you search that hashtag in Twitter you will see the House freshmen and quite a few more senior representatives made the best of McConnell’s continued obstructionism by avoidance, with tweeted photos of them looking for him beginning in early afternoon.

Meanwhile, federal employees struggle to make ends meet, possibly facing eviction in two weeks if they don’t receive a paycheck by then. Senate bill S.24 passed yesterday, ensuring back pay for federal employees once the government is reopened. Though it won’t fix the damage to fed employees entirely, it’s the right thing to do.

It does nothing for federal contractors and subcontractors, many of whom are the lowest paid personnel performing work like sanitation.

And some of these folks are surely Mitch McConnell’s constituents, along with the rest of nearly 60,000 Kentuckyians who are federal employees and active military relying on federal services.

As I shared last week, a friend who owns a small construction business is affected by the shutdown even though they aren’t directly employed by the government. So too every one of those more than 60,000 Kentuckyians directly affected has several shadow counterparts affected indirectly by the shutdown. Like daycare providers, local grocery and retail stores, automotive mechanics, so on, all losing a percentage of their income from the shutdown.

In the case of those serving federal contract employees, they won’t make that income back. And they will be hurting for some time to come, making it difficult to forget this willfully inflicted damage before 2020’s general election. All these federal employees, active military, and contractors as well as their local businesspersons aren’t uniformly Democrats; this is Kentucky we’re talking about, a state which would elect a Republican like McConnell to the Senate in the first place.

It seems odd that McConnell, who polled last week with an improved (ha!) 38% approval rating, would cling so desperately to the shutdown when it looks like he’ll run for re-election. But his polling numbers ticked upward last year when he clung to Trump, providing a likely explanation for his entrenchment.

McConnell hasn’t yet come to grips with Trumpism’s limits. If the Special Counsel’s Office shows Trump and his closest advisers in his campaign and administration have violated multiple laws, will McConnell cling to the appearance of criminality, too?

Because we all know it’s not really if but when the Special Counsel’s Office indicts persons close to the president, the question becomes not Where’s Mitch? but Why, Mitch?

Why would anyone with half a brain screw over enough of their own constituents to populate a city the size of Lexington, Kentucky, and go on believing they just have to stand by their man Trump to win re-election?

And perhaps the question isn’t Why, Mitch? but Why Mitch? This shutdown will have the same impact on all 50 states, affecting the constituents of every senator including the 21 Class II states. Why are the GOP senators allowing McConnell to continue as Senate Majority Leader?

Especially when McConnell seems just a little too smug and too invested in the role over doing his primary job by his Kentucky constituents and the nation. 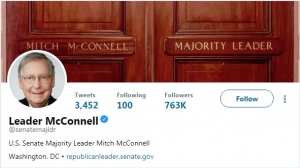 Why Mitch? Why not another GOP senator for Majority Leader?

(Treat this as an open thread.)

How to Talk about Impeachment: Preventing Harm to the Country About the BuzzFeed Scoop: It’s Important, But It Oversells the Lying ...