[NB: You should check the byline as always, though nobody else here at emptywheel is stupid enough to write about golf but me. /~Rayne]

The title of this post is an homage to an informative piece of work about the business of golf, A Good Walk Spoiled, written by sports writer John Feinstein. The book was published in 1995 before Tiger Woods turned pro, driving golf into a boom in tandem with the dot com explosion and the crazy amount of expendable income a certain class of people had to spend on the sport.

A Good Walk Spoiled also preceded the rise of Trump-owned and branded golf courses by a few years. Trump built his first course in 1999, the Trump International Golf Club, West Palm Beach, Florida. On brand with Trump’s litigiousness, the land was acquired after a lawsuit against Palm Beach County. Without pulling up the relevant suit and land records it’s hard to tell exactly how Trump obtained the 350 acres which became Trump’s first course. It’s certainly not clear from this interview:

In 1985 you bought Mar-a-Lago (Trump’s Florida home, a landmark that had been the estate of cereal heiress Marjorie Merriweather Post, wife of E.F. Hutton). How did that happen?

Mar-a-Lago was on the market for about five years, but they wouldn’t sell it to me. Now, they had already sold the beach in front of Mar-a-Lago–stupidly sold it–so I bought that, and then the other potential buyers didn’t want the place so much. Especially after I announced a horrendous project for that beach: big houses between Mar-a-Lago and the ocean. Did I really plan to build those houses? No. But it worked. Once I had the beach, I had them, and they sold me Mar-a-Lago. I got a good deal.

After I got it, I was annoyed by the planes going over to Palm Beach International Airport. So I sued the county. They wound up settling, and I got 350 incredible acres–the land that’s now Trump International Golf Club (An attorney for Palm Beach County says the settlement was unrelated to the land). Which has a quite expensive exit from the highway, by the way. The state’s spending $400 million on a highway (Widening and improving interstate 95), but didn’t build me an exit, and I put up quite a fuss about that. They ended up building a $30 million exit (Florida Department of Transportation says the exit cost even more $40 million) that goes to my $45 million course.

Right from the beginning of his current 17-course golf empire, the means and methods by which he operated them were sketchy.

It doesn’t help that the media has given him a pass so many damned times, even in this particular bit of sports writing. What was the settlement really about? How did Trump really acquire the land? It’s waved off in fourteen words enclosed in parentheses and that’s it. The same kind of wave off The New York Times gave him in coverage of their interview with him yesterday, 11 years after Trump’s bullshit explanation to Golf.com.

And I do mean bullshit. Read the rest of that Golf.com article and see if your eyebrows don’t elevate from the reek.

Especially the bit about playing golf with a banker.

Trump is playing golf right now, unsurprisingly, having traveled to his resort Mar-a-Lago for the weekend. I’m disappointed in one of his golf partners. Jack Nicklaus is a Republican and therefore no surprise as one of Trump’s playmates today. But Tiger Woods? Really, Tiger?

I get that Tiger may feel an affinity for someone who loves golf as much as Trump does, but you’d think Tiger would be smart enough to see the handwriting on the wall and the risk to anyone’s personal brand if they’re too tight with Il Douche.

Maybe Tiger’s going along to get along as far too many people have with Trump all his adult life.

In which case today’s round is just a good walk foiled.

His moochery bilking us of our tax dollars to promote his golf course disgusts me to no end. 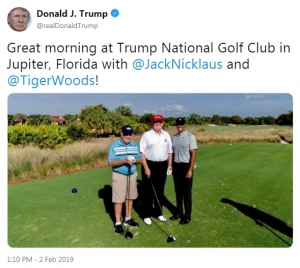 I hope he is counting his golf swings. It would be sweet justice to see one or more of his courses seized if investigations reveal he has defrauded us.

NYT’s Trump Interview: Money for Nothing and Clicks for Free Jerome Corsi’s Theory of Roger the Rat-Fucker’s Mule Prosecutio...