Performance art by a couple dozen GOP House members garnered a lot of media attention last week. Their noisy assault on a House sensitive compartmented information facility (SCIF) during a deposition obstructed a House investigation and compromised the security of the SCIF in an attempt to cast doubt upon the House impeachment inquiry process.

Sophomore (sophomorish-?) GOP representative Matt Gaetz stood out as both a leader of the flash mob; this was his second attempt to crash a meeting though this latest one didn’t do as much for his image.

The stunt and the GOP’s whiny little pizza party and follow-up presser drew a lot of media attention with reactions running the gamut. It was pure hypocrisy for the GOP mob to claim the deposition was an attempt to prevent the public from seeing what was going on, since the committee in attendance included both Democrats and Republicans and operated to rules written and implemented by a Republican majority in 2015

But lost in all the hullaballoo was the deposition itself. This may be exactly what the House GOP intended with their performance – not just to derail the deposition, but to prevent the public from actually knowing anything about Laura Cooper’s testimony.

Projection, as always – when the GOP’s crashers said it was about a meeting Democrats were trying to keep secret, it was about secrets the GOP wants kept.

Which should make us wonder what it was that Laura Cooper had to say that was so worrying to both Trump and the GOP that they staged this intervention.

They didn’t intervene in diplomat Bill Taylor’s deposition, after all. We knew it was going to be rough for Trump because we’d already seen some of Taylor’s texts from his side, casting Gordon Sondland and the administration in a bad light.

But the last time Gaetz pulled this stunt, trying to barge into an investigative session closed to all but House Intelligence Committee members, the subject being interviewed was Fiona Hill.

Hill was Special Assistant to the President and Senior Director for European and Russian Affairs on the National Security Council; she announced on/around June 18 this year that she planned to leave her role at the end of August. She received a subpoena to appear on/around October 10 and appeared last Monday October 14 in a closed-door session for ten hours before the House Intelligence, Foreign Affairs and Oversight committees.

The House parliamentarian ruled Gaetz was not eligible to attend this session; he’s not a member of these three committees. There were other Republican members of these committees in attendance though we don’t know exactly who or how many because the roll call has not been publicized.

The attempt to crash looked like interference at the time. Perhaps Gaetz intended worse, but the deposition went on.

This past week’s deposition of Laura Cooper was much shorter than Hill’s, at only three hours’ duration. It’s not clear whether Cooper’s testimony was not as broad as Hill’s given Hill’s background and role in the administration. It’s possible Cooper’s deposition was interrupted by the GOP flash mob.

This looks not only like an attempt to interfere with the conduct of the House inquiry and obstruct testimony, but witness intimidation and tampering.

Two patterns may be emerging though with only these two depositions be-bothered by GOP stunts it’s not enough data to cinch this.

First, both of these witnesses were women. GOP reps didn’t try to interfere with depositions or hearings of male witnesses like U.S. Ambassador to the European Union Gordon Sondland and Bill Taylor.

Did they pick these two witnesses to intimidate because they were women?

A third woman witness had been harassed but long before she became a witness for the House inquiry; former Ambassador Marie Yovanovitch had been through a character assassination by right-wing horde leading up to her recall from her post in Ukraine this past May, before the key Trump-Zelensky phone call on July 25.

Second, both Hill and Cooper were not anticipated as witnesses when the whistleblower complaint became public knowledge. Diplomats and White House personnel who were involved directly in the call were expected as likely witnesses. What was it that emerged during the earliest testimony which compelled the House committees to call Hill and Cooper?

Did Hill’s departure from her role as special adviser trigger questions?

What exactly did Office of Management and Budget tell the Defense Department and when which would have made Cooper a needed witness?

What was it about Cooper’s anticipated testimony which required such a big dog-and-pony show to suck up media attention to propel the GOP’s misdirection while cutting into time alloted for Cooper’s deposition?

Cooper in particular received a letter from the DOD informing Cooper and her counsel that she as Executive Branch personnel couldn’t “participate in [the impeachment] inquiry under these circumstances” according to an administration-wide direction. There were attachments to bolster claims made in the letter with regard to the House Committees’ refusal to allow White House counsel to attend the depositions and the legitimacy of the inquiry. The letter emerged after Reuters reported on October 17 that Cooper wouldn’t testify and before her deposition.

1) Because the letter wasn’t dated. It has a date stamp on it – 22 OCT 2019 – but not a date typed on the letter at the time it was printed. The stamp appears to be a Received By date but it may also be the date the letter was sent; it’s not clear who or what government entity may have stamped it, whether the Pentagon, Cooper’s attorney, or the House committee which received it though it’s likely not the committee. Note also that October 22 is the date Taylor testified before the House. 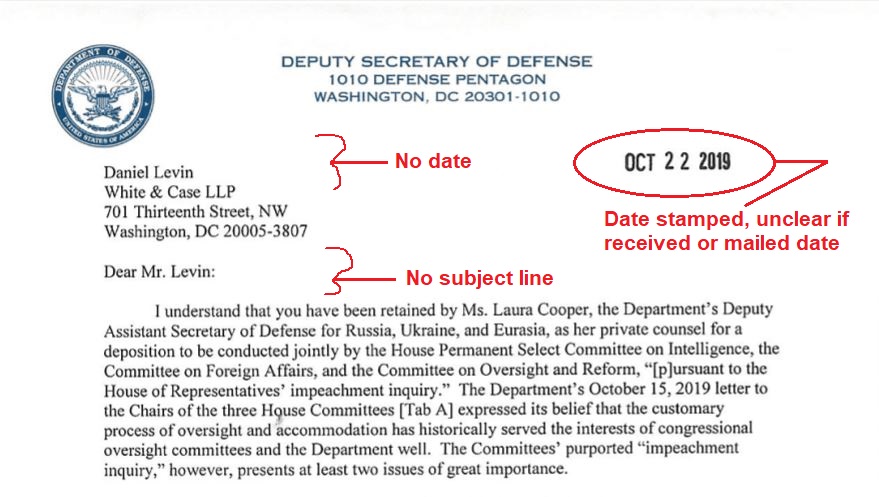 2) Because the signature on the letter is almost illegible; “David L.” is legible but the last name isn’t, save for the letter T at the end. There is no name, title, department beneath the signature. Compare this letter to the first attachment, a letter from the Office of the Assistant Secretary of Defense, signed by Robert R. Hood. You’ll see there is a name, title, department beneath his signature. 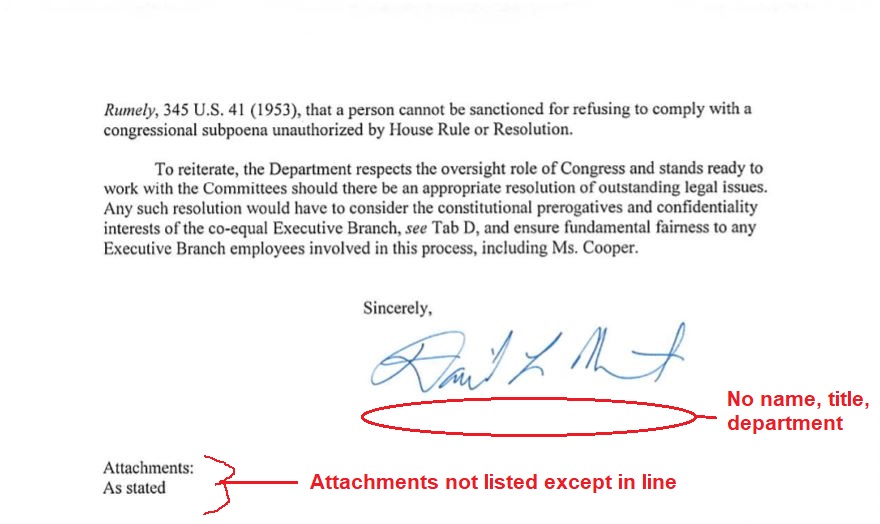 3) Because there’s no subject line, though not all government-issued letters may have them, and

4) There’s no list of attachments, except in the body of the letter, and they’re referred to as Tab A, B, etc. instead of by document title or by a URL if published and available to the public.

Why are these points important? Because someone seeking this particular communication by FOIA wouldn’t be able to find it by date or by Norquist’s name, title, or department, or by the attachments.

But you can choose whether to include a date, name, title, department on a letter.

The New York Times reported last evening that the National Security Council’s authority on Ukraine, Lt. Col. Alexander S. Vindman, will testify today before the House impeachment investigation that he objected not once but twice to the context of Trump’s July 25 phone call with Ukraine’s president Volodymyr Zelensky.

“I did not think it was proper to demand that a foreign government investigate a U.S. citizen, and I was worried about the implications for the U.S. government’s support of Ukraine,” Colonel Vindman said in his statement. “I realized that if Ukraine pursued an investigation into the Bidens and Burisma it would likely be interpreted as a partisan play which would undoubtedly result in Ukraine losing the bipartisan support it has thus far maintained.”

Vindman was present during the phone call and remains an active member of White House staff. It’s not just Vindman’s role, though, which shakes up Trump’s supporters. His credentials will be difficult to push back against — Harvard-educated Purple Heart recipient, and a still-active member of the military, who immigrated to the U.S. as a toddler when his parents fled the former Soviet Union. The right-wing horde is already scrambling to discredit Vindman, going so far as to accuse him of being a double agent and a “hostile witness” in a “kangaroo court.”

In his written statement to the House, Vindman said objected to Sondland’s statements during a post-call debriefing session; he was the third person to do so apart from the as-yet unnamed whistleblower.

Fiona Hill, President Donald Trump’s former top Russia adviser, raised concerns about Rudy Giuliani’s role in US foreign policy toward Ukraine, telling lawmakers on Monday that she saw “wrongdoing” in the American foreign policy and tried to report it to officials including the National Security Council’s attorney, according to multiple sources.

“She saw wrongdoing related to the Ukraine policy and reported it,” one source said. …(CNN, 14-OCT-2019)

With Vindman and both Hill and Bolton sharing their objections with NSC’s top legal adviser, John A. Eisenberg has heard from the most senior and most authoritative persons on U.S. policy on Ukraine. Eisenberg’s role was already in question.

It was Eisenberg to whom several alarmed White House officials turned when Trump urged Ukraine’s President Volodymyr Zelensky to investigate former Vice President Joe Biden and his son Hunter. It was Eisenberg who then helped order the record of that call into a system used for ultra-secret classified information. And it was Eisenberg who, several reports said, consulted with political appointees at the Justice Department on how to handle a whistleblower’s complaint about the Ukraine call. (Politico, 26-OCT-2019)

Has Eisenberg also coached others on handling of correspondence related to the quid pro quo investigation, like Norquist’s letter to Cooper? Note that Norquist isn’t an attorney.

We know now that Vindman’s testimony corroborates both Hill’s and Taylor’s, and that Gordon Sondland is exposed to at least one charge of making a false statement.

It’s this corroboration with Vindman’s testimony that Matt Gaetz tried to obstruct with his first attempt at barging into Fiona Hill’s deposition.

Was it also corroboration with Vindman’s testimony that Gaetz and his flock of GOP co-conspirators tried to obstruct with their barging into the House SCIF during Laura Cooper’s testimony last week?

Among the Republicans participating in the protest was Minority Whip Steve Scalise of Louisiana, the No. 2 House Republican. Gaetz and Scalise both suggested they might return at some point to protest further, though they did not do so Wednesday.
The storm-the-room stunt came two days after Trump said that he thought Republicans “have to get tougher and fight.” Many of the Republicans engaged in the protest were at a White House on Tuesday meeting with Trump, and a person familiar with the matter told CNN that Trump had advance knowledge of the plans to enter the space. (CNN, 23-OCT-2019 – emphasis mine)

Or is there something worse yet ahead which syncs with Cooper’s testimony, something serious enough to warrant Trump conspiring with Gaetz and House GOP members to deter comparison?

Is this why Former deputy national security adviser Charles Kupperman refused to comply with a House subpoena, filing suit instead with the D.C. district court to determine if he is required to testify? Is this suit a stunt of a more subtle nature, intended to head off the next obstructive parade of House GOP members before John Bolton is subpoenaed?

How Sidney Powell Misrepresents Her Evidence in Her Fake Brady Motion Alexander Vindman Proves That Working Within System Works Even While Derek Harvey...