Yesterday, a vague NYT report described Senators and their staffers being briefed that Russia was behind the effort to blame the 2016 hack on Ukraine.

Russian intelligence officers aimed part of their operation at prompting the Ukrainian authorities to investigate the allegations that people in Ukraine tried to tamper with the 2016 American election and to shut down inquiries into corruption by pro-Russian politicians in Ukraine, according to a former official.

One target was the leak of a secret ledger disclosed by a Ukrainian law enforcement agency that appeared to show that Paul Manafort, Mr. Trump’s onetime campaign chairman, had taken illicit payments from Ukrainian politicians who were close to Moscow. He was forced to step down from the Trump campaign after the ledger became public in August 2016, and the Russians have since been eager to cast doubt on its authenticity, the former official said.

Intelligence officials believe that one of the people the Kremlin relied on to spread disinformation about Ukrainian interference was Oleg V. Deripaska, a Russian oligarch who had ties to Mr. Manafort. After his ouster from the campaign, Mr. Manafort told his former deputy later in 2016 that Ukrainians, not Russians, stole Democratic emails. Mr. Deripaska has broadly denied any role in election meddling.

The Deripaska role in this may partly explain the vagueness about the briefing. At least per FOIA redactions made in August, there was an ongoing investigation pertaining to Deripaska at the time.

The article is not vague about one thing: the purpose for the disinformation campaign, which (in addition to permitting Trump to deny the role Russia had in getting him elected) has to do with Ukrainian internal politics. Russia wants Ukraine to investigate people that, the conspiracy theories go, “tried to tamper in the 2016 American election and to shut down inquiries into corruption by pro-Russian politicians in Ukraine.”

This explains the nature of the campaign: Rudy’s disinformation packet (including the John Solomon articles that come from his efforts) target Sergii Leshchenko, NABU, and the Anti-Corruption Action Centre. None of those entities should be the focus of an American smear campaign, to say nothing of an impeachment defense. But painting Joe Biden’s efforts to combat Ukrainian corruption as the opposite and dropping the name of George Soros was sufficient to recruit Donald Trump into ordering his Administration to pursue the effort and enticing the fragile-minded Devin Nunes into chasing the conspiracy like a puppy. The US had been using the leverage it had over Ukraine to push it to address corruption. This disinformation campaign appealed to Trump’s weaknesses to get him to reverse that policy, creating conditions to expand corruption, even while tainting the newly elected President elected on an anti-corruption platform.

Still, Paul Manafort is a key part of that. That’s partly because Manafort continues to protect Trump and at least one of his associates — in part by lying about a meeting on August 2, 2016 where he discussed his ties with both Deripaska and pro-Russian Ukrainian oligarchs as well as carving up Ukraine to Russia’s liking. It’s also because legitimate concerns raised in 2016 about Manafort’s corruption one of the two main ways Ukrainians commented on the election (the other involves criticism of Trump’s comments on Crimea, comments he has since disavowed under oath). The claim — which is false on several levels — is that because Leshchenko publicized the Black Ledger, it led to Manafort’s resignation (Leshchenko has published a second piece making this clear). And, as I and Leschenko keep noting, Manafort knew he was in the Black Ledger months before it became public. If anyone should be held responsible for any taint the publication of his inclusion in the Black Ledger, it’s him; if it was a problem, he should have disclosed that problem to the candidate.

With all that said, then, I want to note something that happened with Rudy’s disinformation packet, which I unpacked in detail here. As I noted, there are two versions of three sets of notes from January 2016, one of a phone interview with Viktor Shokin conducted on January 23, 2019, and two of an in-person interview with Yuriy Lutsenko conducted in NY on January 25 and 26. The first set appears to be what Rudy gave Pompeo. The second may reflect Pompeo’s notes on them, which include some proofreading, stars for emphasis, remarks on timing.

But as I noted, the original version appears to have come with underlines already included. 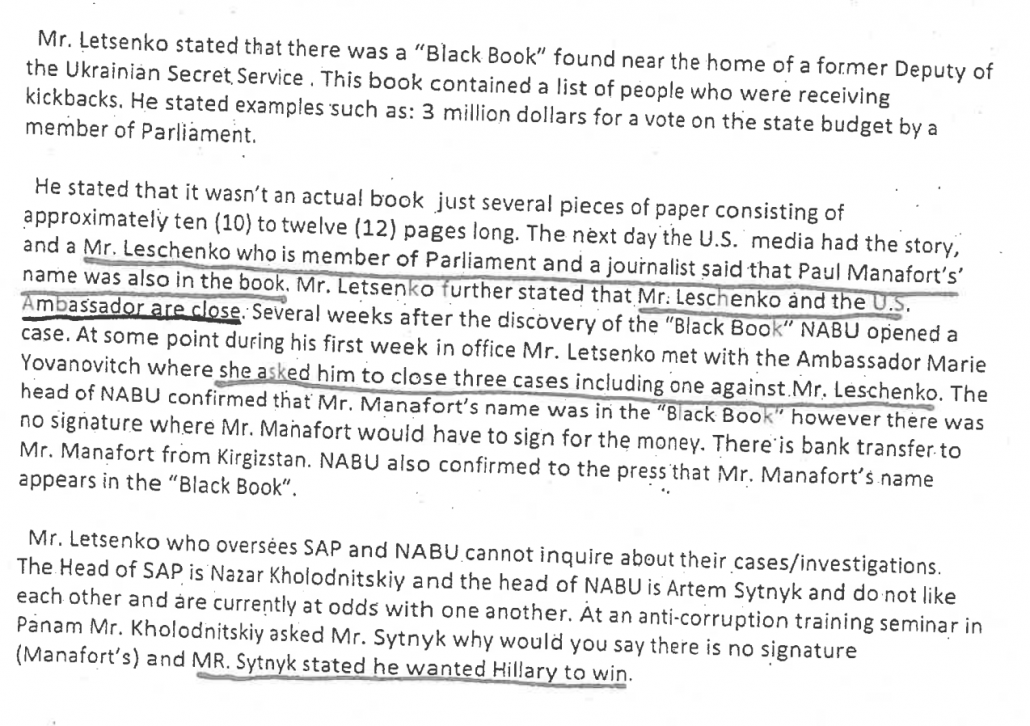 The only annotation added to that section was to circle Leshchenko’s name (which is not transliterated as he does it, so this could either be emphasis or one of several really nitpicky notations of errors in the notes).

The reason I’m interested in this is because, while the passage has a bunch of errors (for example, the size of the Black Ledger is wrong, the allegation against Yovanovitch is invented, Leshchenko released something else, that’s not how US media got the story), it does make it clear that Manafort was in the Ledger. That is, even disinformation (which Lutsenko has since recanted) designed to help Trump includes the allegation that Manafort was in the Ledger. It also asserts that Manafort was laundering money through Kyrgyzstan, which is also true.

Furthermore, nothing here refutes the validity of the Ledger more generally.

That might not be clear to someone reading quickly, of course, because of the way the other details were underlined.

Which is why it is all the more inexcusable that Republicans — including but not limited to Rudy and Devin Nunes — continue to suggest that Manafort was unfairly tainted by the ledger, as happened in this exchange between Nunes and David Holmes last week.

Nunes: The black ledger, is that seen as credible information?

Nunes: The black ledger is credible?

Nunes: Bob Mueller did not find it credible, do you dispute what Bob Mueller’s findings were? They didn’t use it in the prosecution or in the Report?

Holmes: I’m not aware that Bob Mueller did not find it credible. It was evidence in other criminal proceedings. Its credibility was not questioned in those proceedings.

Even in Rudy’s own disinformation, which is full of easily identifiable lies, it states clearly that Manafort was in the ledger and was laundering money (the latter allegation of which he has pled guilty to). And yet Republicans are still running around ignoring even their own manufactured dirt to pretend the accusations against Manafort were simply made up.

Perhaps that’s because, without Manafort, Trump’s own stakes in this go down substantially.