As I noted yesterday, the FD-302s of FBI’s conversations with Bruce Ohr released to Judicial Watch the other day are unremarkable. The scope of Judicial Watch’s request left out the time periods — before Ohr was handed off to another FBI Agent after the election, and after Mueller was hired — that would be the most interesting. But what we do see shows that FBI first reached out to Ohr in an effort to assess the Steele dossier production, and Ohr was able and willing to chase down answers for the FBI that go to issues of credibility. Later, Steele reached out to Ohr in a panic about what would happen as Congress scrutinized his work more closely; in what we see, those conversations were not inappropriate (which is not to say I’m sympathetic to Steele’s concerns, given how he publicized his work). Though given Ohr’s notes, they may have been later in the year; at a minimum, they show how aggressively Steele was trying to prepare a public story that ended up being quite partial.

In my opinion, the FOIA exemptions are the most interesting aspect to the 302s. We can learn a bit from the things DOJ chose (or felt obligated) to protect. Here’s a short guide to FOIA exemptions and here’s DOJ’s more thorough one.

The less interesting redactions are for the following purposes:

The exemption, b3, protects information protected by statute, often the National Security Act. For example, that’s one of the exemptions (along with privacy and law enforcement technique exemptions) used to protect boring bureaucratic details about the case file. But it’s interesting in one instance.

The discussions, starting on PDF 14, of how Steele was panicking about one of his sources are protected for privacy, source, and b3, statute (as well as, sometimes, law enforcement technique). 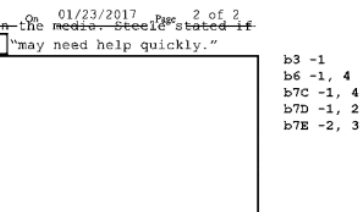 That’s interesting, because FBI is not saying this person’s identity is classified. Nor is it saying that this person is credibly at risk of being killed, which would be a b7F (which is what they’d use to protect our own recruited agents). But they are according Steele’s source some kind of statutory protection.

The exemption, b1, protects classified information. It’s a measure, in these discussions about someone who used to work as an intelligence officer for an ally and who continues to collect HUMINT, of what the DOJ or other agencies considers genuinely classified (and doesn’t always line up with the initial or FOIA review classification marks on the paragraphs). For example, a paragraph describing how Ohr first met Steele — which appears in unredacted form in Ohr’s congressional testimony as follows — is protected by both a b3 and b1 exemption, presumably to protect references to MI6.

A more interesting redaction appears on PDF 8, in a series of paragraphs where the Agent was asking Ohr whether about his personal knowledge of certain aspects of Steele’s work, such as whether he had witnessed Steele’s meetings with Jon Winer. One of those paragraphs is redacted, in part for b3 and b1 reasons, and classified Secret. Whatever that protects, it’s a reminder that Ohr and Steele had real discussions about organized crime in the past.

By far the most interesting exemptions, however, are what FBI has chosen to protect because of ongoing investigations, exemption b7A, starting with what they have not protected: these conversations, generally.

The frothy right believes that Bruce Ohr should go to prison because he shared information about suspected Russian crimes with other experts in the subject. Ohr’s role in the dossier has presumably been under scrutiny for some time as part of DOJ IG’s investigation into the basis for Carter Page’s FISA application. In addition, Christopher Steele and Glenn Simpson have both been referred to DOJ for suspected lies to Congress, the latter more credibly than the former. With one significant possible exception, there’s nothing in these 302s that has been protected for either of those reasons. Ohr’s earlier and later conversations with Steele would be more pertinent to those inquiries (and there’s reason to believe the later ones are being treated as such), but some of these 302s would clearly be too. But FBI has determined they can release these files. That’s interesting, especially, because of the history of this FOIA:

As recently as August 5, DOJ said it was “still engaged in internal discussions about the redactions necessary to release the requested records to the public.” In other words, a very recent review of these files has determined that files showing how FBI handled the mid-term discussions between Christopher Steele and Bruce Ohr may be released to the public.

The big possible exception pertains to details of the original conversation on Trump and Russia with Steele.

The paragraph describing what Steele first told Ohr back on July 30, 2016 is redacted for b1, b3, and b7A reasons.

The redactions in this passage include the entirety of Steele’s explanation for the “over a barrel” comment, which is interesting because other agencies have released these details (which may name the people boasting they had kompromat on Trump). The paragraph also redacts part of the discussion of Deripaska preparing to bring details on Paul Manafort’s “theft” from him to US authorities. That may be for privacy reasons,  but — assuming the order is the same in the interview and the notes, but it seems Ohr was reading verbatim — both are redacted for ongoing investigation reasons in Ohr’s notes released in December. 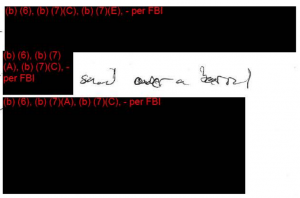 If, as seems to be the case, Page was not redacted as part of an ongoing investigation in either of these suggests the early Ohr conversation is not one being scrutinized by DOJ IG on the FISA application (especially given the notes were released in December, well before the IG had come close to finishing, as has been reported).

One other thing in that first interview pertains, per the redaction to an ongoing investigation: a discussion of a post-Ukrainian invasion meeting involving Ohr, Steele, and oligarchs (possibly, though not definitely, Russian).

The description seems to match a meeting Steele is known to have set up with Deripaska (though that meeting was in 2015).

The treatment of one known Deripaska reference and this reference to cultivating oligarchs as sources (earlier in 2016, Steele had been trying to get DOJ to use Deripaska as a source) is particularly interesting given that, what appear to be additional Deripaska references, are also redacted to protect an ongoing investigation.

A significant chunk of the 302 memorializing the February 6, 2017 interview protects an ongoing investigation. 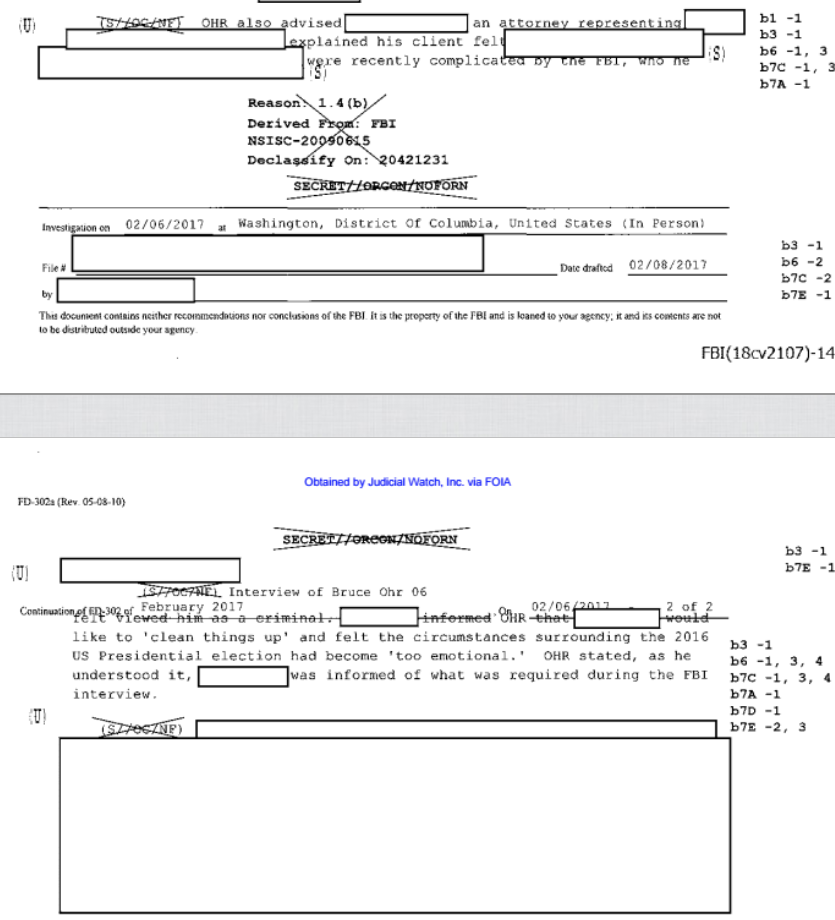 There are good reasons to think this is a reference to Deripaska. Steele worked for Deripaska lawyer Paul Hauser, and Deripaska was interviewed in September 2016. Deripaska would be directly implicated in the election (two months after this interview, Deripaska was sanctioned).

This may reflect a conversation directly with Hauser though, as the Steele reference in this interview was covered in entirely in a WhatsApp chat. Given the redaction, it’s also possible that Ohr took notes, which would be among the 6 pages not turned over because of an ongoing investigation.

And while less definitive, this passage from the February 14 interview of Steele referring to which lawyers he was working for could also be the Hauser work.

Given the withholdings on Ohr’s note from the meeting, the ongoing investigation does pertain to Steele’s client. 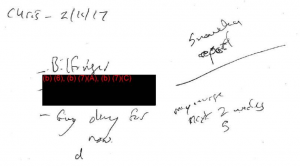 If it is Deripaska, it would suggest that Steele was financially dependent on his Deripaska work, as the other client mentioned, Bilfinger, wasn’t paying him (which he complained about to Ohr).

[Note, this note also has what looks like a reference to “Snowden report,” which makes absolutely no sense to me, so I assume I’m misreading it.] Update: This is likely a reference to the report, from the day before, that Russia was offering Snowden to Trump.

It has long been troubling that Steele had an ongoing relationship with Deripaska during the time he worked on the dossier. It’s clear that Deripaska used Steele to misinform DOJ that he was upping the pressure on Manafort, hiding that Manafort was instead making a desperate — and somewhat successful bid — to get back on Deripaska’s payroll.

A good deal of the ongoing investigation redactions in these Ohr 302s suggest DOJ continues to be interested in all that, as well.

The other ongoing investigation redactions are far more surprising, as they suggest (though this is far less definitive than the Deripaska tie) that DOJ may continue to investigate … something pertaining to the Alfa Bank allegations.

The initial reference to Alfa Bank, from the November 22, 2016 interview and discussing his September 2016 meeting with Glenn Simpson, is not protected as part of an ongoing investigation — though what appears to be a continuation of a discussion of it is treated as classified. 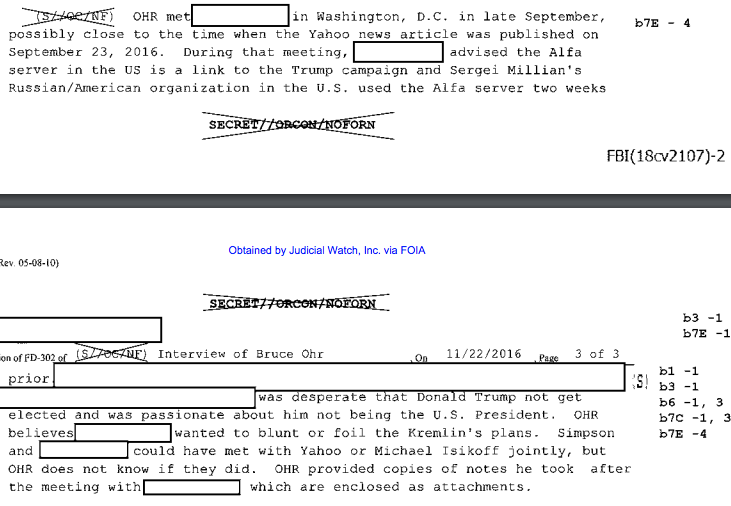 It’s certainly possible that the second paragraph is unrelated, and that’s what pertains to the ongoing investigation. But treating them as the same FOIA exemptions suggests they’re related.

In the same interview, Ohr explained that when he asked Simpson if he was concerned about his personal safety, Simpson,

mentioned that someone called and asked him to find out where all of the Alfa Bank stories were coming from. Simpson did not state this was a threat from the Russians, but that was the impression made upon OHR based upon the timing of the comment and using that story as a response to OHR’s question.

This seems to suggest more than one Alfa Bank story.

Also note two things. First, when the NYT first got the story of Jared Kushner’s “back channel” meeting with Sergey Gorkov, they had it as a meeting with Alfa Bank (though they misspelled it in the same way that Steele’s dossier did). That meeting would take place four days after Simpson raised whatever crazy tip he got, on December 13.

Kushner agreed to meet with Gorkov. 1151 The one-on-one meeting took place the next day, December 13, 2016, at the Colony Capital building in Manhattan, where Kushner had previously scheduled meetings. 1152

Also, during this period, Petr Aven was trying to reach out to Trump’s people on direct orders from Putin.

In December 2016, weeks after the one-on-one meeting with Putin described in Volume I, Section IV.B.1.b, supra, Petr Aven attended what he described as a separate “all-hands” oligarch meeting between Putin and Russia’s most prominent businessmen. 1167 As in Aven’s one-on-one meeting, a main topic of discussion at the oligarch meeting in December 2016 was the prospect of forthcoming U.S. economic sanctions. 1168

After the December 2016 all-hands meeting, Aven tried to establish a connection to the Trump team. Aven instructed Richard Burt to make contact with the incoming Trump Administration

It’s highly unlikely that Simpson got wind of any of those things; we would have heard about it. I raise these other instances not because I think Simpson had them, but because it’s clear Mueller chased these Alfa leads much further than we otherwise knew, and the leads themselves still seem not to have amounted to anything (even while showing that Putin leveraged the threat of election-related sanctions on the one bank that was legally acceptable in the west at the time, Alfa, to get its oligarch to join his efforts to cultivate Trump).

These Alfa allegations all still seem to be fluff. But even so, the redactions in the second reference may suggest there’s something here of continued interest to the FBI.

Update: I’ve taken out Bill Priestap’s name, as that was incorrect reporting when this came out.