Not the Right Kind of Monster, Says the Racist [UPDATE-2] 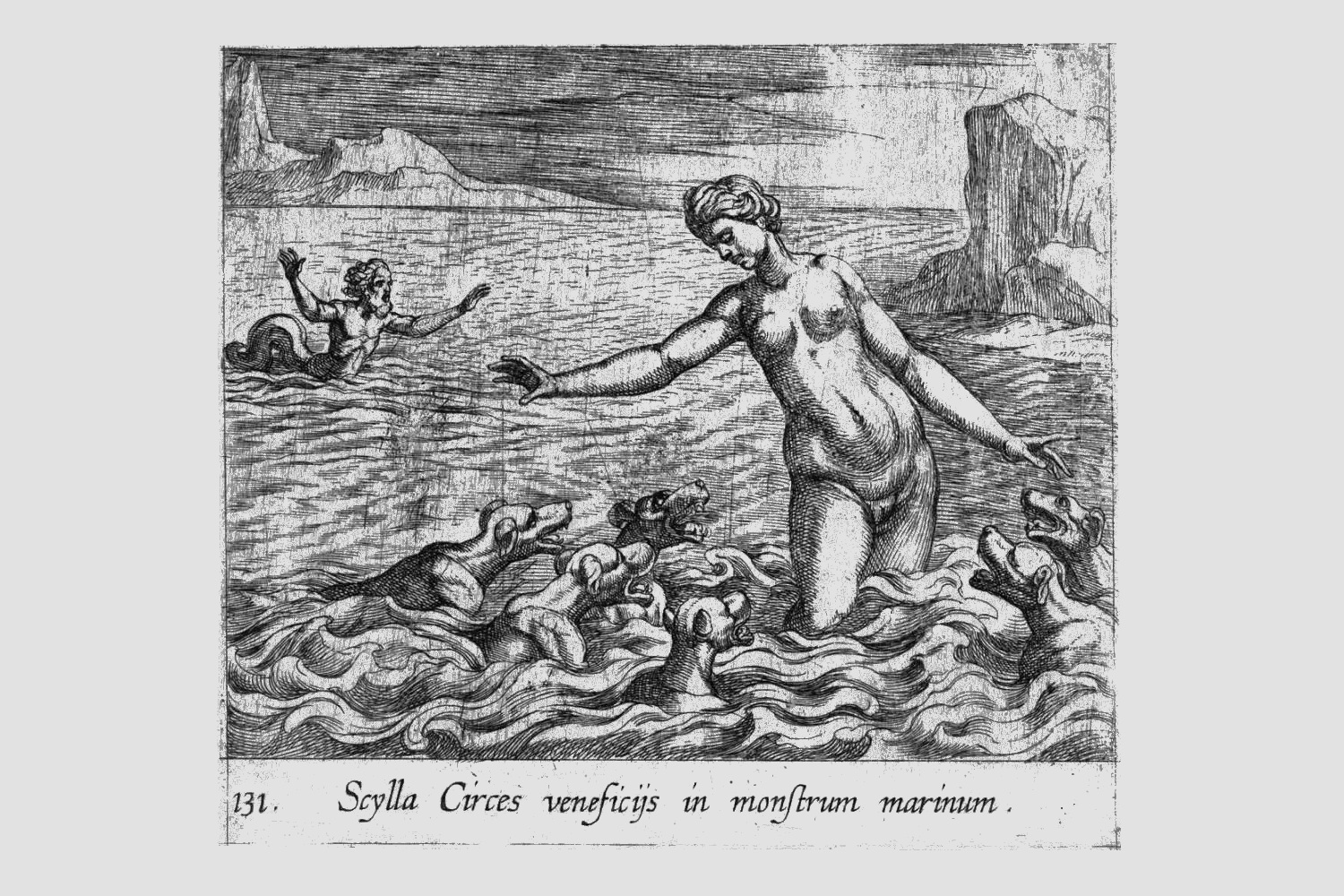 [NB: Check the byline, thanks! Updates at bottom of post. / ~Rayne]

It was just a matter of time before Republicans honed their eye teeth and sharpened their claws, coalescing around a single line of attack after Joe Biden announced he’d selected Kamala Harris as his running mate.

Harris is a dirty radical leftist! Harris is an Obama centrist! they snarled across social media, grasping at any point to prove to Democratic Party voters that Harris isn’t their kind of candidate.

Harris will defund the police! Harris is a cop! they growled in more posts and tweets from the right and their horseshoe left proxies, whipping up vortices of volatility in messaging about Harris’s identity.

But Newsweek solved that yesterday by publishing this piece of racist bullshit to which I won’t link: 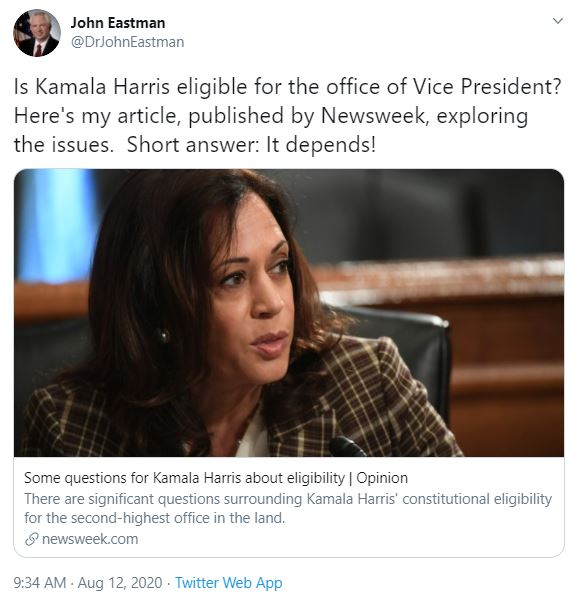 Not only is this racist ogre’s argument wrong, the contributor was a former candidate who lost the Republican primary for California Attorney General in 2010 when Kamala Harris won.

Newsweek failed to point out this conflict of interest upfront; in for a penny, in for a pound, though, as Newsweek had already failed to spike the piece.

Early this morning Newsweek’s editor offers an explanation and it is just as bad as Eastman’s: 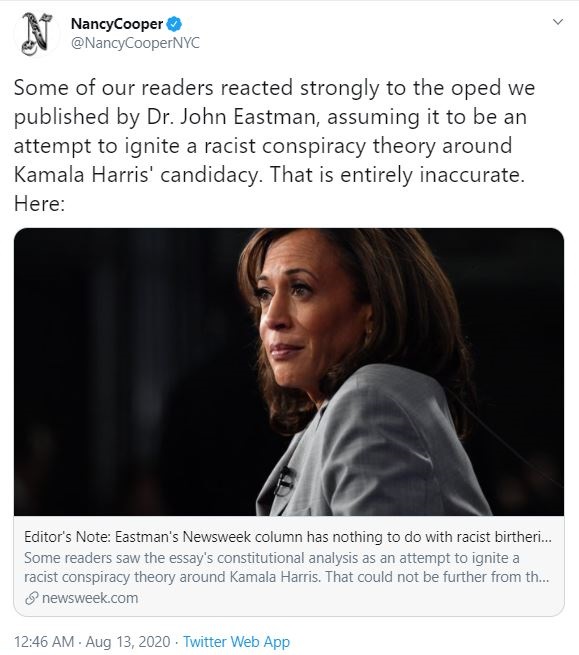 It’s bad when right-leaning Axios says the op-ed is baseless and hypocritical since Eastman didn’t have any problem with Ted Cruz’s candidacy in 2016.

Justin Fox at Bloomberg Opinion definitively takes apart Eastman’s monstrous argument in case there’s any doubt, replete with excerpts about the drafting of the 14th Amendment. This is what Newsweek should have sought before approving Eastman’s racist crap.

Eastman likely picked up his cue from USAToday’s fact-checking article addressing an earlier Facebook entry which cast doubt about Harris’s eligibility (not linking to the entry): 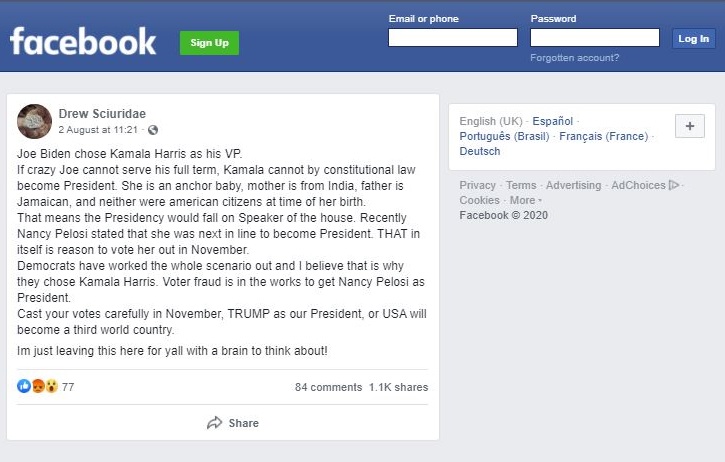 USAToday said they reached out to this Facebook poster. They never mention whether they had any luck making contact.

I doubt they could.

The poster’s last name, Sciuridae, means squirrel in Latin; the last name doesn’t match the username in the Facebook URL for the post, aseckora. The post looks — well, squirrelly.

While USAToday did a thorough job shooting down the Facebook post’s false claims, it doesn’t look good that it didn’t resolve the source of the claims.

Whatever triggered Newsweek’s unacceptable choices isn’t rational. A once-respected news organization has now become cursed by its terminal adherence to bothsides-ism, giving a platform to racism.

In the manga work, “Death Note,” by Tsugumi Ohba and Takeshi Obata, the character L Lawliet describes the targets of his detective work:

While their adored tangerine-tinted president abducts children from the parents and cages them, sucks resources from taxpayers’ government services, lies about the spread of pandemic and the reasons why Americans are dying, the right-wing will argue again and again that Harris is some kind of monster. These arguments will be propelled even further by their trollish minions to flood the zone.

They’ll ignore the logical inconsistency of their claim Harris is not eligible as an immigrants’ child though their fearless and feckless leader is an immigrant’s child, too, and the grandson of a then-Canadian brothel owner to boot.

The real problem for the right-wing isn’t that Harris is some kind of dread bugaboo or a feared bugbear.

It’s that Harris isn’t one of their kind.

She’ll never be qualified to be a white supremacist monster.

The monster in the White House just referred to Eastman’s piece-of-shit racist op-ed.

This is why this argument must be repudiated strongly. Average Americans have taken this man’s word on face value too often — like the man who poisoned himself with HCQ or the people who sickened themselves drinking disinfectant after Trump promoted both as means to treat COVID-19.

These same people will accept on faith this racist’s racist lawyer’s bad opinion because he said it from the presidential podium.

This observation is key: 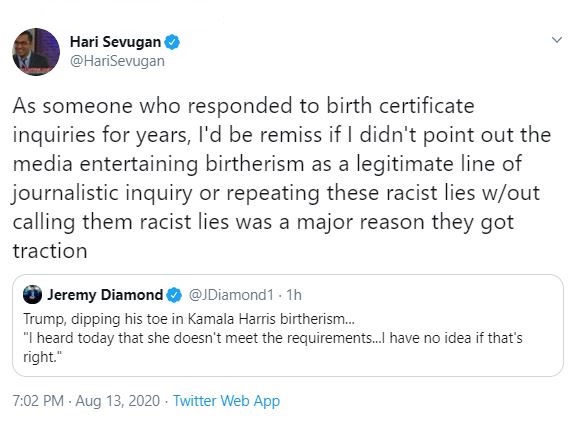 It’s on Newsweek for platforming Eastman’s racist bullshit, validating it as equal to any counter argument.

It’s on other entities like USAToday which fact checked another birther’s claims but did not call it out forcefully as racism. The words race, racist, racism never appear in their article.

As I’ve said before: Get comfortable with calling out racism. I’m talking to you white people. Recognize, call it out, shame it.

The reason why Trump had any chance of winning in 2016 and again in 2020 is racism. Until you, white people, make it socially, morally, ethically unacceptable to be racist, Trump and his kind of monster will continue to acquire and hold power.

It’s not enough to just nod your head. Silence is approval. Silence is complicity. You must be anti-racist if you want the monsters dead.

USAToday piece is what happens when white people just nod their heads and don’t openly acknowledge racism at work.

Which media outlets recognized the next generation birtherism as racism?