Median Net Worth of Whites Twenty Times that of African-Americans 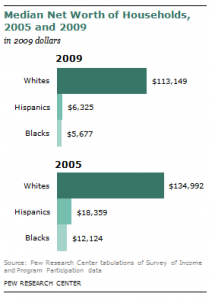 The Pew Research Center has a report showing not just the decline in net worth across demographic groups from 2005 to 2009, but more importantly, the relative net worth of those groups.

It shows that, no matter how bad the $23,000 drop in net worth that the housing crash represented to whites, they’re still doing far better off than people of color. Hispanics lost $12,000, fully 66% of their net worth. African Americans lost almost $6,500, more than half of their net worth.

And of course, the real scandal is that the media net worth for whites is 20 times that of African Americans and 18 times that of Hispanics.

Here’s how the report describes the source of these discrepancies (the short version is that whites have more assets in addition to their homes–and lost less value in their home–than Hispanics and African-Americans).

Hispanics: The net worth of Hispanic households decreased from $18,359 in 2005 to $6,325 in 2009. The percentage drop—66%—was the largest among all groups. Hispanics derived nearly two-thirds of their net worth in 2005 from home equity and are more likely to reside in areas where the housing meltdown was concentrated. Thus, the housing downturn had a deep impact on them. Their net worth also diminished because of a 42% rise in median levels of debt they carried in the form of unsecured liabilities (credit card debt, education loans, etc.).

Blacks: The net worth of black households fell from $12,124 in 2005 to $5,677 in 2009, a decline of 53%. Like Hispanics, black households drew a large share (59%) of their net worth from home equity in 2005. Thus, the housing downturn had a strong impact on their net worth. Blacks also took on more unsecured debt during the economic downturn, with the median level rising by 27%.

Whites: The drop in the wealth of white households was modest in comparison, falling 16% from $134,992 in 2005 to $113,149 in 2009. White households were also affected by the housing crisis. But home equity accounts for relatively less of their total net worth (44% in 2005), and that served to lessen the impact of the housing bust. Median levels of unsecured debt among whites rose by 32%.

Even with this explanation, the Pew Report doesn’t talk about the implications of this. What kind of stability can a family have if they effectively have only $6,000 to fall back on (and for 24% of Hispanic and African-American households, that $6,000 represents nothing more than a car). Given the rush to gut social security, what kind of retirement (or disability) can this family have?

And note the rise of unsecured debt among all races. A lot of folks are just living on credit cards or other debt (or were, back in 2009; a lot of people have gone bankrupt since then).

There’s a huge chunk of this country living on the edge and that group is disproportionately African-American or Hispanic.