The More You Look for Terrorists, the Fewer Banksters You Have to Prosecute 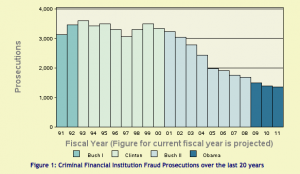 This report–or rather the HuffPo piece on it–has gotten a lot of attention. It shows the government as a whole has prosecuted 57.7% fewer financial fraud crimes than they did 10 years ago, when 9/11 changed everything.

The report on our government’s growing disinterest in prosecuting banksters should be paired with this FBI report which I reported on some weeks ago (since that time, FBI has removed the link to the report). The FBI report makes it clear that the FBI, at least, has shifted its approach over the last decade from a “case driven” focus to a “threat driven” focus–meaning that it decides what it’s going to look for and then goes to find criminals committing that crime rather than finds crimes and responds to them. Depending on whether you believe this report or Director Mueller’s June reconfirmation hearing, financial fraud is either the 7th or 5th highest priority for the FBI, behind terrorism, counterintelligence, and cyberattacks.

Those priorities show. As part of its focus on terrorism, the FBI has increased surveillance capacity by 48%. And over that time, the report boasts, the FBI has written 85,500 raw intelligence reports. It has set up 10,200 SCI workstations.

All of which costs money. The FBI reports that its budget authority–which it notes is driven by the strategy–has more than doubled over the period in which it has found half as many banksters.

Most telling, though, is a stat you get by putting the two reports together. TRAC notes that FBI referred 37.6% of the fraud cases for prosecution so far this year–working out to be roughly 470 cases. But if you work out how many financial cases they say they were tracking last year (they say “more than 2,800” equates to 57% of the cases), you see they were tracking roughly 4,912 financial fraud cases. If these numbers are correct, it means fewer than 10% of the banksters and other fraudsters they’re tracking ever get charged.

In other words, it’s not that they’re not seeing the crime. They’re just not referring it for prosecution, choosing instead to look for young Muslim men to entrap.