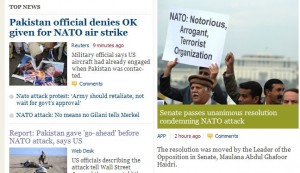 Despite the Journal claiming that they could not get a response from Islamabad on this information, the Express-Tribune carries this response in a Reuters story:

A Pakistani military official categorically denied the Journal’s account, saying the aircraft had already engaged when Pakistan was contacted.

“Wrong information about the area of operation was provided to Pakistani officials a few minutes before the strike,” said the official, who was not authorized to speak to the media.

“Without getting clearance from the Pakistan side, the post had already been engaged by US helicopters and fighter jets. Pakistan did not have any prior information about any operation in the area.”

Sorting out just whom to believe in this case is difficult.  As commenter marc said in the thread from yesterday’s post:

Pakistan’s ISI says one thing NATOs ISAF says the opposite. Two known habitual liars with conflicting stories means we are unlikely to ever know the truth.

Also in yesterday’s post was a video purportedly released by Pakistan’s military, showing the aftermath of the attack. It can help to sort out one portion of the claims and counter-claims. Note that in the Wall Street Journal article, the US mentions a “temporary encampment”, while Pakistan has maintained all along that the attack was on an established border post, comprised of permanent buildings, that should have been clearly marked on all NATO maps. Now watch the video again:

The first part of the video, shot from the air, shows a fairly large area of a ridge-top that has been burned, presumably from the NATO attack. We also see several established, permanent buildings which fit Pakistan’s description of the Volcano border post. However, when the video switches to footage shot on the ground, we only see things that are more consistent with the US description of a “temporary campsite”. There are shelters which appear to be corrugated metal covering holes dug into the hillside, with the metal covered by dirt and branches. There also is an area of rocks piled together in something that looks like a child’s snowfort, and there appear to be dead bodies in the center of it. Strikingly, in this part of the footage, we see no permanent buildings that would correspond with those seen in the aerial footage.

In the meantime, stories continue to fly on how Pakistan is now revising its rules of engagement and how the Pakistani air force was unable to scramble in time to respond to the attack. If this crisis is to be understood and perhaps defused, though, I think that will rest on gaining a full understanding of the “temporary campsite”.