Close, But No Cigar: NYPD within 3 Miles of Faisal Shahzad’s Hawala, Missed It 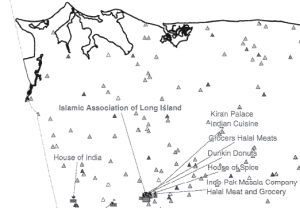 On April 10, 2010, Mohammad Younis, of Centereach, NY, met with Faisal Shahzad at the Ronkonkoma train station and gave him $7,000 in cash. That money went to buy fertilizer, propane, and gasoline that Shahzad used to build a bomb he tried to set off in Times Square three weeks later–the last real Islamic terrorist attack launched on New York City.

I was particularly interested to see the NYPD’s intelligence profile of Suffolk County released by the AP this morning. As I noted last year, the NYPD’s extensive intelligence programs failed to identify the two most significant attacks on NY in recent history: those attempted by Najibullah Zazi and Shahzad.

With Zazi, that failure was epic; the NYPD used his imam as an informant, and actually tipped Zazi off to the investigation.

But Shahzad’s attack would have been harder to find. He plotted the attack from Connecticut–outside the city, though well within the range of the NYPD’s intelligence efforts. The one lead squarely within the NYPD’s profiling activities, though, would have been the hawala Shahzad used–Younis’ hawala–to get money from Pakistan.

It turns out the NYPD’s profiling efforts got within 3 miles of Younis’ house. They profiled his house of worship, the Islamic Association of Long Island. They profiled about 10 businesses in his community–though they focused on the halal restaurants, not the 7-11 where Younis used to work or the Lowes where he worked at the time he met with Shahzad. They also profiled a mosque and an auto repair shop in Ronkonkoma, the town where Shahzad met with Younis.

They never found Younis or his hawala activities, which he did not operate for profit.

Mind you, even if they had profiled the 7-11 or the Lowes, they still wouldn’t have found anything. Younis himself had no knowledge of Shahzad’s plot (Younis plead guilty to one count of unlicensed money remitting and was sentenced to three years of probation in December).

Which all goes to show that even profiling the precise neighborhoods through which terrorist money flows will not–did not–serve to discover or prevent attacks.

tweets from our circle
emptywheel@emptywheelRT @kyledcheney: HUH: Republicans subbed in Matt GAETZ for Rep. Chip Roy on the newly formed GOP select subcommittee h/t to @AnnieGrayerCN…30 minutes ago07 February 2023
emptywheel@emptywheelI just wrote yesterday how @CJR claimed, as fact, that there was no there there of the Russian investigation just w… twitter.com/i/web/status/1…40 minutes ago07 February 2023
Ed Walker 🍞🌹💉💉@MasaccioEWRT @haymarketbooks: It’s us, we’re publishing company twitter.com/thehill/status…15 hours ago07 February 2023
bmaz ( @[email protected] )@bmazI don't ever promote much of anything, but this chocolate is seriously good. kuhl.com/kuhl/other/acc…18 hours ago07 February 2023
bmaz ( @[email protected] )@bmazNobody wants to coach the Cardinals. twitter.com/Vikings/status…21 hours ago06 February 2023
bmaz ( @[email protected] )@bmazWhy did you need a gun in Mexico, jackass? Am there quite frequently, and never needed a gun. NASCAR Star Kyle Bu… twitter.com/i/web/status/1…21 hours ago06 February 2023
Ed Walker 🍞🌹💉💉@MasaccioEWRT @inequalityorg: 166 million Number of Americans living paycheck to paycheck at the end of 2022. Even among people earning more than $10…23 hours ago06 February 2023
Jim White@JimWhiteGNVRT @bmaz: @JimWhiteGNV @ptoemmes @laRosalind This is important. The last time I heard about a Komodo, it bit Sharon Stone's husband. http…4 days ago03 February 2023
Iran: Parallel to 2003 Rhetoric, Senate War Lobby Objects to Negotiations, IAEA... MDP: Take Advantage of Taxpayer Funded Right to Screw with GOP Primary
Scroll to top