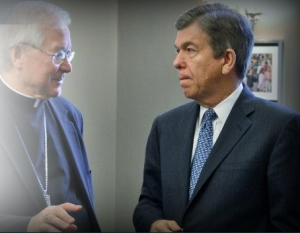 I confess, since I wrote this post I’ve been obsessing about Roy Blunt’s balls.

It’s not just that I believe every supporter of the Amendment that bears Blunt’s name should be willing to tell taxpayers whether they’ve used birth control to limit the size of their families.

But because I think there’s a distinct possibility that Blunt had a bunch of Catholics pay to snip his man-parts so he wouldn’t have any more kids.

That, of course, would be precisely what his Amendment claims to want to prevent: forcing people of faith to pay for medical care–birth control–that violates their conscience (or that of their Bishops).

Blunt was born on January 10, 1950. He married Roseann Ray in 1967 (she appears to have been, like him, 17 at the time). Matt, their oldest child, was born in November 1970, the year Blunt graduated from college (though he would immediately get a Masters, perhaps because of the draft). They had a second child, Amy, around 1973. Andrew, their youngest, was born in 1976. Blunt and Roseann were married another 26 years or so after Andrew was born, but never had another child.

In 1972, Blunt had already started public service, working as Greene County Clerk. In 1984, Blunt won election as MO’s secretary of state. From 1993 to 1996, Blunt served as President of Southwest Baptist University–his only significant non-government job. In 1997, as he was turning 47, he started serving in Congress, until last year when he moved to the Senate. Thus, for almost his entire life, Blunt worked for taxpayers, whether for Greene County, the state of MO, or the federal government. For the majority of Blunt’s career, taxpayers have paid for his healthcare. And since his now ex-wife Roseann doesn’t get benefits from the foundation she works at, it is likely he provided healthcare for both of them.

If that’s right, then for all but 4 years of his professional life, taxpayers of some sort have paid for his healthcare, including–if it was paid for by insurance–whatever means he and his wife of 35 years used to stop having children after Andrew was born. And while Greene County, in the Ozarks, is Bible-belt Protestant, at the state level, almost 20% of the population of MO is Catholic. An even higher percentage is Catholic at the national level. For 60% of his working life, roughly 20% of the people paying his salary and benefits–his “employer” if you will–were Catholic.

Which brings us to snipping Roy Blunt.

There are any number of ways Blunt and his first wife, Roseann, might have stopped having kids at 3: medical complications, abstinence, the pill, condoms, or sterilization. Several of those would violate the letter of Catholic doctrine.

But look what happened when, in 2002, Blunt ditched his high school sweetheart, Roseann, and married his mistress, Altria lobbyist Abigal Perlman. They adopted, an 18-month old Russian boy whose adoption went through in April 2006.

Again, there are multiple possible explanations for their choice to adopt rather than have a biological child together. By the time they married on October 18, 2003, Blunt was 53, the point in a man’s life where he starts shooting blanks. Perlman was 41, also the tail end of safe child-bearing age for a woman. It’s possible they tried to conceive and failed to do so immediately, so decided to adopt. It’s possible Perlman didn’t want to have a pregnancy interrupt her high power lobbying career. It’s possible they didn’t want to overpopulate the world.

Or, it’s possible Blunt got snipped all those years ago when he stopped having biological children with Roseann.

Again, all of this should be none of our business. But Blunt made it our business when he insisted that no Catholics should have to pay for birth control that violates the mandate–but not the practice–of their religion.

For over half of his working life, 20% of Blunt’s employers were Catholics. And yet he appears to have had no compunctions–no “conscience clause,” if you will–about making them pay for his birth control.

Update: Thanks to steve w for correcting my math on Blunt’s age when he got to Congress.