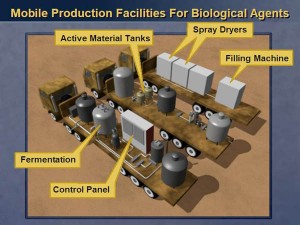 Dammit, I gave away half the game, the “who” said these words.

I have seen some information that would suggest that they have been actively working on delivery systems.

There is no doubt in my mind — and it’s fairly straightforward from what we’ve been saying for years — that they have been interested in a nuclear weapon that has utility, meaning that it is something they would be able to deliver, not just something that sits there

But when? And about which country?

Contrary to what you might think, these words come not from Colin Powell’s famous UN speech, but from the speech where he rolled out the Laptop of Death in 2004, in the days just after Bush’s re-election when Dick Cheney was shoving Powell out the door.

The Laptop of Death, you’ll recall, amounted to war in a box, all the evidence you’d need to justify a war against Iran based on claims it was developing not just nukes, but nukes “they would be able to deliver, not just something that sits there.” It included the adaptation plans to Iran’s Shahab-3 missiles, the plans for a tunnel that bore no signs it’d be used for testing nukes but got included anyway, and evidence that a defunct firm had once produced a material–green salt–used in uranium processing. It was logically impossible all those things would be on one laptop, available for the taking, but that didn’t stop the usual suspects from selling the Laptop of Death as credible intelligence.

As the years went on, evidence grew the laptop had come from MEK–the same terrorists we’ve outsourced our Iranian scientist assassination to, perhaps by way of Mossad. And once the Iranians were given a copy of some of the documents, they were able to show they were forgeries.

It seems like a good time to remind everyone that even after Colin Powell ruined his reputation with the UN presentation, he still agreed to lend his diminished credibility to yet more transparent propaganda to start what might have been (and may yet still be) the next war. As Tiny Revolution and Digby note, Powell’s latest book attempts to refute bloggers who call him a liar for the UN presentation. Well, if he didn’t know, then why did he step up willingly to sell Cheney’s propaganda a second time, at a time when he owed the Bush Administration nothing?

Here’s an even better reason to remind people how long the Iran warmongers have been trying to sow war with transparent propaganda. As I joked and Moon of Alabama mocked at more length, they appear to have given the guy who drew the crappy illustration of the Mobile Bioweapons Labs based on admitted exile warmonger Curveball’s lies his job back, this time to draw the detonation tank Jim White already threw water on.

For whatever reason, even at the moment Colin Powell tries to pretend that the last time this hack illustrator sowed his wares everything was done in good faith, they’re rolling out similarly laughable illustrations again.