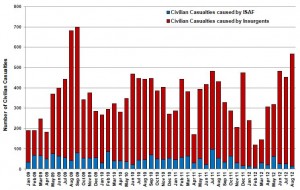 Spencer Ackerman is having none of this ploy, though, and the title of his piece from Thursday evening tells us all we need to know: “Whatever Pentagon Says, U.S. Patrols With Afghans Aren’t ‘Normal’ Yet“:

The U.S. defense chief announced on Thursday that the U.S. troops have returned to their “normal partnered operations” with their Afghan counterparts, after a recent policy shift put a big layer of bureaucracy in between Americans and Afghans. Only that policy remains in place, the Pentagon confirms.

Yet although Panetta said the tempo of operations has mostly returned to normal, the two-stars still have to approve the operations themselves. “The FRAGO [fragmentary order] that directed approval for partnered operations below the battalion level be maintained at the R.C. [Regional] Commander-level remains in effect,” says Air Force Lt. Col. Jack Miller, a Pentagon spokesman. Marine Col. David Lapan, the spokesman for the chairman of the Joint Chiefs of Staff, confirmed that the directive is still on the books.

If that sounds bureaucratic, it should. The reason for the shift is to create a layer of protection for U.S. troops against the newly urgent “insider” threat from the Afghan troops they mentor. If the threat is so great that a general in charge of securing vast swaths of Afghanistan thinks an operation at the company, platoon or squad level needs to be shut down, the theory goes, that ought to save American lives.

Panetta and the Defense Department are facing the difficulty of dealing with a war and a war strategy that has clearly failed and yet they must delay full acceptance of that failure until after the November election. Semantic games are a preferred ploy by the DoD under Obama, as seen when troops were redefined as “non-combat” in order to claim the end of combat operations in Iraq or in the redefinition of what an independent unit is when describing the training of Afghan security forces. Ackerman added even further pressure on the Defense Department Thursday when he published a leaked set of statistics (pdf) for “progress” in Afghanistan through August of this year. As shown in one figure from that set reproduced above, during the vaunted “surge” in Afghanistan that began in early 2010 and ended this month, civilian casualties have remained virtually unchanged. Any claims about “momentum” being in favor of the US are simply unfounded.

I find it very hard to see how Leon Panetta can remain as Defense Secretary in a second Obama term. He has been the source of two major leaks, identifying Dr. Shakeel Afridi as working for the CIA to find bin Laden and leaking Pakistan’s plans for military operations in the insurgent havens in the tribal areas. He also keeps making statements that present a far rosier picture of the status of the war in Afghanistan than is justified.