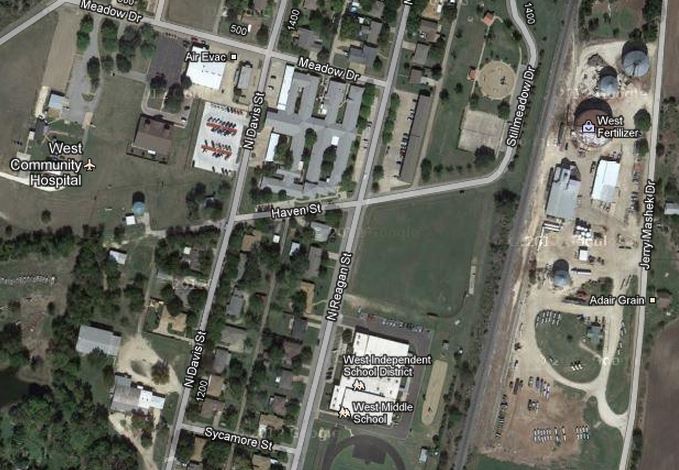 Ammonium nitrate, one of the most commonly used fertilizers is also highly explosive. It was the primary component of Timothy McVeigh’s bomb that destroyed the Murrah Building in Oklahoma City. Texas, especially, should know of the dangers inherent in fertilizer plants, as this disaster occurs very near the anniversary of the Texas City disaster:

One of the worst disasters in Texas history occurred on April 16, 1947, when the ship SS Grandcamp exploded at 9:12 A.M. at the docks in Texas City. The French-owned vessel, carrying explosive ammonium nitrate produced during wartime for explosives and later recycled as fertilizer, caught fire early in the morning, and while attempts were being made to extinguish the fire, the ship exploded. The entire dock area was destroyed, along with the nearby Monsanto Chemical Company, other smaller companies, grain warehouses, and numerous oil and chemical storage tanks. Smaller explosions and fires were ignited by flying debris, not only along the industrial area, but throughout the city. Fragments of iron, parts of the ship’s cargo, and dock equipment were hurled into businesses, houses, and public buildings. A fifteen-foot tidal wave caused by the force swept the dock area. The concussion of the explosion, felt as far away as Port Arthur, damaged or destroyed at least 1,000 residences and buildings throughout Texas City. The ship SS High Flyer, in dock for repairs and also carrying ammonium nitrate, was ignited by the first explosion; it was towed 100 feet from the docks before it exploded about sixteen hours later, at 1:10 A.M. on April 17. The first explosion had killed twenty-six Texas City firemen and destroyed all of the city’s fire-fighting equipment, including four trucks, leaving the city helpless in the wake of the second explosion. No central disaster organization had been established by the city, but most of the chemical and oil plants had disaster plans that were quickly activated. Although power and water were cut off, hundreds of local volunteers began fighting the fires and doing rescue work. Red Cross personnel and other volunteers from surrounding cities responded with assistance until almost 4,000 workers were operating; temporary hospitals, morgues, and shelters were set up.

Probably the exact number of people killed will never be known, although the ship’s anchor monument records 576 persons known dead, 398 of whom were identified, and 178 listed as missing. All records of personnel and payrolls of the Monsanto Company were destroyed, and many of the dock workers were itinerants and thus difficult to identify. Almost all persons in the dock area-firemen, ships’ crews, and spectators-were killed, and most of the bodies were never recovered; sixty-three bodies were buried unidentified.

It would appear that Texas has learned very little from that disaster and still chooses to sacrifice volunteer first responders at the  altar of free enterprise.

Special FREEDOM bonus: Did you notice the name of the street to the west of the middle school? It’s North Reagan Street, because, well, freedom.