Would We Have Accepted the Dragnet if NSA Had to Admit It Could Have Prevented 9/11? 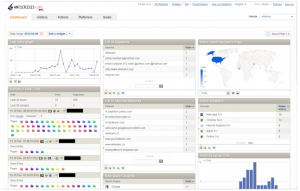 I’m going to return to Glenn Greenwald’s latest showing details of how the NSA treated WikiLeaks and, to a lesser degree, Anonymous (as well as Alexa O’Brien’s update on the investigation into WikiLeaks) later.

If GCHQ does this kind of tracking, how did Five Eyes miss the Tsarnaev brothers?

But for now I want to look at one slide covering GCHQ’s AntiCrisis monitoring approach (see slide 34), which in this case is focused on WikiLeaks. It shows how GCHQ has the ability — and had it in 2012 — to monitor particular websites. It shows GCHQ can monitor the visitors of a particular website, where they’re coming from, what kind of browsers they use. None of that is, in the least surprising. But given those capabilities, it would be shocking if GCHQ weren’t doing similar monitoring of AQAP’s online magazine Inspire, with the added benefit that certain text strings in each Inspire magazine would make it very easy to track copies of it as it was downloaded, even domestically via upstream collection. And for the UK, this isn’t even controversial; even possessing Inspire in the UK can get you imprisoned.

Given that that’s the case, why didn’t GCHQ and NSA find the Tsarnaev brothers who — the FBI has claimed but provided no proof — learned to make a bomb from the Inspire release that GCHQ or NSA hacked? Why isn’t NSA reviewing why it didn’t find the brothers based on cross-referencing likely NSA tracking of Inspire with its FBI reporting on Tamerlan Tsarnaev?

I used to not believe NSA should have found the Tsarneavs. But now that I’ve seen all the nifty tools we’ve learned NSA and, especially, GCHQ have, they really do owe us an explanation for why they didn’t find the Tsarnaev brothers, one of whom was already in an FBI database, and who was allegedly learning to make a pressure cooker bomb from a document that surely gets tracked by the NSA and its partners.

Which brings me back to James Clapper’s interview with Eli Lake.

Clapper said the problems facing the U.S. intelligence community over its collection of phone records could have been avoided. “I probably shouldn’t say this, but I will. Had we been transparent about this from the outset right after 9/11—which is the genesis of the 215 program—and said both to the American people and to their elected representatives, we need to cover this gap, we need to make sure this never happens to us again, so here is what we are going to set up, here is how it’s going to work, and why we have to do it, and here are the safeguards… We wouldn’t have had the problem we had,” Clapper said.

“What did us in here, what worked against us was this shocking revelation,” he said, referring to the first disclosures from Snowden. If the program had been publicly introduced in the wake of the 9/11 attacks, most Americans would probably have supported it. “I don’t think it would be of any greater concern to most Americans than fingerprints

But I also want to take issue with Clapper’s claim that if NSA had presented a “gap” to Members of Congress and the public after 9/11 we would have loved the dragnet.

Had we known of the errors and territorialism that permitted 9/11, would we have agreed to any of this?

I do so, in part, because the claim there was a “gap” is erroneous and has been proven to be erroneous over and over. Moreover, that myth dates not to the days after 9/11, but to misrepresentations about the content of the 9/11 Commission report 3 years later. Note, too, that (as has happened with Inspector Generals reviews of the Boston Marathon attack) the Commission got almost no visibility into what NSA had against al Qaeda.

More importantly, had NSA gone to the public with claims about gaps it did and didn’t have before 9/11, we would likely have talked not about providing NSA more authority to collect dragnets, but instead, about the responsibility of those who sat on intelligence that might have prevented 9/11.

As Thomas Drake and the other NSA whistleblowers have made clear, the NSA had not shared intelligence reports that might have helped prevent 9/11.

I found the pre- and post-9/11 intelligence from NSA monitoring of some of the hijackers as they planned the attacks of 9/11 had not been shared outside NSA. This includes critical pre-9/11 intelligence on al-Qaeda, even though it had been worked on by NSA analysts. I learned, for example, that in early 2001 NSA had produced a critical long-term analytic report unraveling the entire heart of al-Qaeda and associated movements. That report also was not disseminated outside of NSA.

Hiding the worst: In December 2001, Senator Saxby Chambliss, chair of a House Subcommittee on Homeland Security announced a preliminary investigation into 9/11. At a SIGINT Leadership Team meeting in February 2002, SIGINT chief Maureen Baginski directed me to lead a NSA Statement-for-the-Record effort for a closed-door hearing scheduled by Sen. Chambliss for early March to discuss what NSA knew about the 9/11 hijackers and their plotting before 9/11.

As indicated above, the highly embarrassing answer was that NSA knew a great deal, but had not shared what it knew outside of NSA.

After a couple of weeks Baginski rejected my draft team Statement for the Record report and removed me from the task. When I asked her why, she said there was a ‘data integrity problem’ (not further explained) with my draft Statement for the Record. I had come upon additional damaging revelations. For example, NSA had the content of telephone calls between AA-77 hijacker Khalid al-Mihdhar in San Diego, CA, and the known al-Qaeda safe house switchboard in Yemen well before 9/11, and had not disseminated that information beyond NSA.

In short, when confronted with the prospect of fessing up, NSA chose instead to obstruct the 9/11 congressional investigation, play dumb, and keep the truth buried, including the fact that it knew about all inbound and outbound calls to the safe house switchboard in Yemen. NSA’s senior leaders took me off the task because they realized – belatedly, for some reason – that I would not take part in covering up the truth about how much NSA knew but did not share.

When the 9/11 Commission hearings began, Director Hayden chortled at executive staff meetings over the fact that the FBI and CIA were feeling the heat for not having prevented 9/11. This was particularly difficult for me to sit through, for I was aware that NSA had been able to cover up its own culpability by keeping investigators, committees, and commissions away from the truth. [my emphasis]

One of many reasons I think Dick Cheney and Michael Hayden buried this program so deeply is because they both knew that NSA had failed — not to pick up the warnings of 9/11, but failed to share the data that might have prevented it.

If we had been honest in the days after 9/11 — as Clapper now claims we should have been — we might have avoided major parts of this dragnet altogether. Because we would have had a better understanding of how much of 9/11 arose from human error or bureaucratic territorialism, and not from any big data gaps.

If Michael Hayden had admitted he had the dots before 9/11 but failed to connect them, do you really think Americans would have agreed to a massive dragnet to plug a gap that didn’t exist?