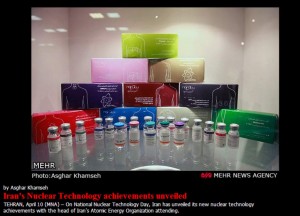 Changing the reactor’s fuel, however, could reduce such a threat, according to a team of experts at Princeton University’sWoodrow Wilson School of Public and International Affairs. The researchers, all from the Program on Science and Global Security (SGS), propose their technical modifications—including changing the operating power of the reactor—in the April issue of Arms Control Today.

“The changes we suggest could dramatically reduce the reactor’s production of plutonium while maintaining the reactor’s performance for peaceful applications,” said co-author Frank von Hippel, a founder of SGS, and professor emeritus of public and international affairs.

The Princeton team urges that Iran dramatically reduce its potential plutonium output by converting the reactor from using natural uranium fuel to low-enriched uranium fuel. This would greatly reduce the quantity of U-238 in the fuel that is turned into plutonium in the reactor by neutron absorption. With low-enriched fuel, the reactor power could be reduced without loss of performance and so further reduce plutonium production.

“These measures require Iran to make a different kind of fuel for Arak than what they currently plan,” said Alexander Glaser, assistant professor at the Wilson School and Department of Mechanical and Aerospace Engineering at Princeton. “But they would meet Iran’s needs and address the concerns of the international community as reflected by the P5+1.”

“The steps we describe are technically feasible and would not reduce Arak’s usefulness for civilian purposes. They provide a sound basis for resolving one of the key points of contention in the talks on Iran’s nuclear program,” said Ali Ahmad, a research fellow in nuclear technology policy, who performed the computer calculations that underlie the Princeton team’s proposal.

A bit more background on plutonium production from nuclear reactors can be seen here. Although that background piece was prepared for standard light water reactors, the concept remains the same where we see that plutonium is only produced from the U-238 in the loaded fuel, while U-235 does not produce plutonium. The Princeton plan changes the fuel in the Arak reactor from unenriched natural uranium, which has a high U-238 content, to a lightly enriched version where there is more U-235 than in the originally planned fuel for the reactor. This allows the reactor to be run at lower power but still produce the U-235 reactions that are desired in using the reactor for its declared purpose of medical isotope production.

I fully expect that hawks will next claim that even if Arak is modified so that it doesn’t produce enough plutonium in a year for a bomb (Dahl notes here that Arak under the new design would produce less than a kilogram of plutonium per year, while also pointing out in the more recent article that it would produce nine kilograms a year in the initial design. Around 8 kilograms are needed for a plutonium bomb.), the plutonium produced could still be used as a trigger for a bomb made with highly enriched uranium. See here for a peek at the environmental catastrophe that has been US plutonium trigger production. If the US has had that much trouble with plutonium triggers, I doubt Iran will be wanting to get into plutonium reprocessing just for triggers.

Relating to the plan for medical isotope production, Iran announced on Wednesday the establishment of a unit to produce oxygen-18 at Arak:

Iran has set up a unit to produce oxygen-18 isotope which is an important precursor for the production of fluorodeoxyglucose used in positron emission tomography, Head of the Atomic Energy Organization of Iran (AEOI) Ali Akbar Salehi announced on Wednesday.

“Today concurrent with the National Day of the Nuclear Technology, the unit for the production of oxygen-18 isotope starts operation in Arak research reactor,” Salehi said, addressing a meeting of AEOI experts and directors with Supreme Leader of the Islamic Revolution Ayatollah Seyed Ali Khamenei in Tehran on Wednesday.

With this new flexibility on the design for Arak, it is no surprise that we learned earlier this week that Iran feels that about 50-60% agreement with the P5+1 group has already been achieved and that the July deadline from the interim agreement is likely to be met. In a further sign that the groups appear committed to achieving full agreement for the deadline we have this about the upcoming meeting in May:

Unlike previous rounds the May meeting will be open-ended to allow negotiators to meet all week if needed as they increase efforts to seal a deal, she [a senior US administration official] said.

It seems to me that things are coming together at a sufficient pace that the optional second six month negotiating period may not be needed.