This weekend does not bring the excitement of last did with the Women’s World Cup, but there are three notable events, two of which are even sports related.

First up is the German Grand Prix from the famed Nurburgring in the Eifel Mountains. Nurburgring was also the site of the 1961 German Grand Prix. Continuing with this year’s homage to the 50th anniversary of the Championship season for my late friend Phil Hill, let’s go back for a minute to the sounds and smell of The Ring in 1961.

Nurburgring was a far different circuit in the 60s than it is today. Phil Hill took pole position in qualifying by shattering the lap record, becoming the first person to lap in under 9 minutes, with a stunning lap of 8 minutes 55.2 seconds (153.4 km/h or 95.3 mph) in the famed Ferrari 156 “Sharknose”. In the race though, Phil could not match Stirling Moss in his Lotus-Climax. Here is the Wiki description:

The race was won by British driver Stirling Moss driving a Lotus 18/21 for privateer outfit the Rob Walker Racing Team. Moss started from the second row of the grid and lead every lap of the race. It was the first German Grand Prix victory for a rear-engined car since Bernd Rosemeyer’s Auto Union Type C took victory in 1936. Moss finished just over 20 seconds ahead of Ferrari 156 drivers Wolfgang von Trips and Phil Hill, breaking a four-race consecutive run of Ferrari victories. The result pushed Moss into third place in the championship points race, becoming the only driver outside of Ferrari’s trio of von Trips, Hill and Richie Ginther still in contention to become the 1961 World Champion with two races remaining.

The Nurburgring of today is a far different, more sterile and safer track, and much shorter, with a length of just under 3 miles as opposed to the former 14 miles plus. Mark Webber of Red Bull was fast in practice Friday and took pole today with a surprising P2 for Lewis Hamilton of McLaren. Sebastian Vettel in the other Red Bull is in P3, the first time he will not start from the front row this year. The Ferraris of Alonso and Massa will start in P4 and P5 respectively. The race day weather forecast is for cool temperatures, clouds and some rain, which should make for a very interesting race. Again, the assholes at Rupert Murdoch’s Fox TV will make US F1 fans watch the race on a tape delay, starting at 12 EST and 9 am PST.

In other sporting news, it looks like the great NFL Football lockout is in its last throes. From Marke Maske at the Washington Post:

NFL player leaders are scheduled to meet Monday in Washington, where they are likely to recommend approval of the lockout-ending collective bargaining agreement already ratified by the league’s franchise owners, several people familiar with the deliberations said Saturday.

The lockout could officially end next Saturday with the opening of the free agent market and teams beginning training camps, those people said, cautioning that those plans were subject to change. The 10-year labor agreement first would have to be ratified by a majority of the nearly 2,000 NFL players.

But if free agency begins and training camps open Saturday, the preseason would be likely to be played as scheduled beginning Aug. 11, said those people familiar with the situation. 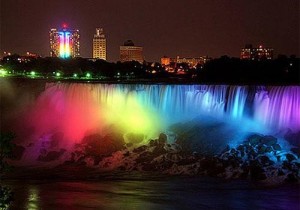 Lastly, and quite charmingly, we have the first vows in New York resulting from the recent passage of marriage equality in the state. As soon as the clock strikes midnight, Kitty Lambert and Cheryle Rudd are going to be the first married under the new law at a rainbow-lit Niagara Falls. From The HuffPo:

Two Buffalo women plan to be the first to legally wed under the state’s new same-sex marriage law, which goes into effect on Sunday, one month after Gov. Andrew Cuomo signed it into law. The pair, Kitty Lambert and Cheryle Rudd, are to be married the minute after midnight as the Niagara Falls are lit up with the colors of a rainbow.

Sounding much like any other nervous newlywed-to-be, Buffalo resident Lambert told HuffPost they were “really excited, a little overwhelmed, a whole lot frightened.” After 11 years together, she said, “I don’t know why I’m frightened by this commitment.”

Jitters or not, the couple has a big ceremony planned. Lambert, 54, and Rudd, 53, have five adult children and 12 grandchildren. The umbrella advocacy group New Yorkers United for Marriage is promoting the marriage as the first of its kind in New York State. Local politicians will be in attendance along with an estimated hundreds of friends and gay rights advocates for a meal, speeches, and a candlelight procession on Goat Island that will lead across Bridal Veil Falls and then to Luna Island. And the falls, of course, will be illuminated to look like a rainbow, a symbol of the gay rights movement.

That is pretty darn cool. Hats off to the happy couple, and let’s hope they find happiness on the other side of their rainbow.