In Thanks for Michigan’s Bounty 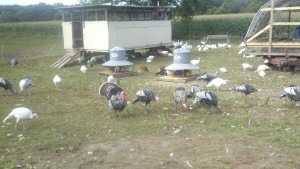 Two years ago, I made a concerted effort to cook our entire Thanksgiving Dinner, save for spices and olive oil, with products from MI.

I’ve moved twice since then, but found this year that I almost pulled it off without trying (I didn’t use MI flour and butter).

Here are some of the great farmers and producers we’ll be thanking tonight for their bounty:

Crane Dance Farm: We’ve come to rely on this Animal Welfare Certified farm for most of our meat and had the opportunity to tour the farm back in September, when we met the turkey (above) and bacon (right) we’ll be eating tonight, as well as the hens who laid the eggs in our pumpkin pie. This is one of those farms that cycle their stock (pigs follow chickens follow cows) to optimize the use of the land. Did you know chickens like to wallow around in the dirt if they’re able? 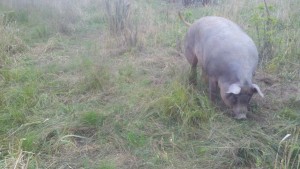 Hilhof Dairy: I’ve never been to this farm, but I’d like to, because their milk and cream tastes amazing, with a real depth of creamy flavor.

Blueberry Heritage Farms: When we moved to west MI, we moved to blueberry country. This particular farm, which does some organic berries, also sells cranberries in big 2 pound boxes. So in addition to the cranberry-apple chutney we’ll be eating tonight, we’ll be eating lots of cranberry goodies for the next several weeks.

Ham Family Farm: Since we didn’t do a CSA this year, we got the veggies for tonight’s feast from a range of farmers at the Fulton Street Farmer’s Market. One we buy from a lot–Charlie Ham–talked me into brussel sprout leaves this year, rather than brussel sprouts themselves. The leaves look like collard greens and have the bitterness of the brussel sprouts to set off the sweet and rich food, but also has a hint of sweetness to it. Plus, I figure it’ll cut down on work to just saute the greens.

Brys Estate Wines: Between a great wine dinner we had at Salt of the Earth restaurant and some trips up to Sleeping Bear Dunes, we’ve been trying more Brys Estate wines. I’ve got some wines I mistakenly didn’t get sent waiting for us at the winery. So tonight, we’ll just have some Riesling (along with an unoaked chardonnay from Bowers Harbor and some Old School Red from Peninsula Cellars).

Founders Brewing Company: And of course, we now live in beer mecca, just over a mile from Founders. There might be some Reds Rye PA in my future, particularly if the Kitties don’t win this afternoon. Also likely if they win.

May your bounty be as wonderful as ours today! Happy Thanksgiving.

Update: I’ve had a request to explain how I use bacon on my turkey. As I’ve explained, I think the bacon serves the same purpose as brining (slow application of salt), without the meat losing it’s “bite” as I think can happen with brining. Plus, it protects the breast from over-browning. And best of all, you can pick it off at that point of the afternoon where you start to get really hungry but don’t want to ruin your appetite. And once you’ve cleaned the bacon off, it’ll brown nicely.

As you put the bird in the oven, cover it with bacon. I will use a full pound for a big bird, which is what we have this year (14 pounds).

I’ll tent my turkey for about an hour, then let the bacon brown for about 1.5 hours, and by then I’ll be ready for snacking. Which, after a couple of trips back to the oven to strip the bacon, should leave about an hour for the bird to brown.