Why Won’t the FAA Tell EFF Who’s Flying the Drones in US Airspace? 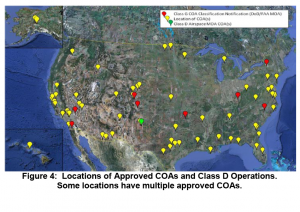 According to this October 2010 report, these are all the locations at which someone–DOD, DHS, and NASA are publicly admitted users; “Other Government Agencies” (spooks) are always included in the discussion though not detailed–got waivers from the Federal Aviation Administration since 2008 to operate drones outside of restricted airspace. And we know they’ve been active since then, doing things like helping to arrest Sovereign Citizens who had stolen 6 cows.

Last April, the Electronic Frontier Foundation FOIAed to find out who was operating these drones.

(1) any active certificates or authorizations issued by the FAA for any type of drone or unmanned aircract (UA), including public UAs and private UAs, and all corresponding agency records;

(2) any expired certificates or authorizations issued by the FAA for any type of drone or UA, including public UAs and private UAs, and all corresponding agency records;

(3) any applications for UA certificates or authorizations that were denied by the FAA, and all corresponding agency records.

But thus far, the agency has refused to fulfill the FOIA request. On Tuesday, EFF sued to get those records.

Kudos to the EFF for suing to get these records. But FAA’s silence thus far really raises questions about what kind of drone surveillance they’ve already got us under.