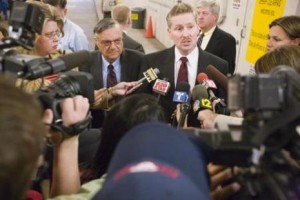 I have written several times over the years about the unethical antics of Andrew Thomas, the disgraced former elected County Attorney in Maricopa County Arizona. (See: here, and here and here for instance).

The article at the last link was, with unwitting prophecy, titled “Arpaio And Thomas: The Most Unethical Sheriff And Prosecutor In America Conspire To Abuse Power And Obstruct Justice“. Indeed, subsequent to that article, Thomas resigned as Maricopa County Attorney, lost a bid to be elected Arizona’s Attorney General and was charged with a blistering set of ethics violations by the Arizona Supreme Court via their Disciplinary Board.

Nearly two and a half years later after the prophetic article, those chickens have come home to roost for Andrew Thomas. After the appointment of bar discipline investigators/prosecutors from Colorado to avoid conflict, the assignment of the Chief Disciplinary Judge to the case, and a two month long, very public, adversarial hearing, the Arizona Supreme Court has just issued its decision against Andrew Thomas and his two of his top aides while at the Maricopa County Attorney’s Office.

The court found insufficient evidence and dismissed a couple of the initial charges against Thomas. However, as to pretty much the entirety of the remaining thirty (30) plus counts, the court found ETHICAL VIOLATION BY CLEAR AND CONVINCING EVIDENCE.

Wow, this is a first rate tarring and feathering, as to Thomas primarily, but his key aides Lisa Aubuchon and Rachel Alexander, as well. Andrew Thomas and his go-to assistant Lisa Aubuchon have both been disbarred. The other assistant, Rachel Alexander, has been handed a much more severe suspension that anticipated, which was set at six months and one day, the extra “one day” being assessed to put her in a harder position to be reinstated. Harsh.

Thomas was charged in in a total of 30 of the counts counts, Aubuchon in 28 and Alexander with seven counts. As Yvonne Wingett and Mike Kiefer summarized in the Arizona Republic:

Charges cover a variety of allegations, including conflict of interest for holding press conferences to denounce the Maricopa County Board of Supervisors, which was his client, and threatening county officials with litigation; falsely claiming a judge had filed Bar complaints against Thomas, in order to have the judge removed from a case; and seeking indictments against county officials to burden or embarrass them. In one case, the charges allege, Thomas and Aubuchon brought criminal charges against a county supervisor even though they knew that the statute of limitations had already expired on the offenses.

The most serious allegations involve filing criminal charges against a sitting Maricopa County Superior Court judge without probable cause in order to stop a court hearing. Several of the allegations of ethical misconduct revolve around a federal civil racketeering lawsuit claiming that judges and county officials conspired against Thomas and Sheriff Joe Arpaio.

The importance of these holdings, and the attendant disbarment of Andrew Thomas and Lisa Aubuchon, cannot be understated in Arizona, especially Maricopa County. As I explained back in 2009, before any of these ethics charges were propounded, and when Andrew Thomas and Joe Arpaio were in the heyday of their abusive power:

Today, Arpaio and Thomas filed and announced their criminal charges against Judge Donahoe just hours before he was scheduled to hear a petition by the County Board of Supervisors to disallow once and for all the publicity stunt Thomas and Arpaio tried to pull with the attempt to inappropriately hire the unlicensed partisan hit team of diGenova and Toensing. When the bogus Federal racketeering suit did not get the removal of Donahoe like they wanted, they upped the unethical ante yet again and filed bogus criminal charges against him.

The foregoing is the consistent and unrelenting method of operation for Sheriff Joe Arpaio and Maricopa County Attorney Andrew Thomas; they use and abuse their positions of authority and public trust to pursue personal and political desires and vendettas and, if questioned or challenged, use their offices to attack and cripple their enemies, whether they be private individuals or elected officials and judges. It is a corrupt and craven fiefdom they are running in the fourth most populous county in the United States.

This reign of intimidation and abuse of office has been going on for years. Conspiring together, Arpaio and Thomas have created a power center that is uncontrollable and dismissive of any and all local authority and law; they answer to no one, and will attack anyone in their way. You have to wonder where the Feds are, and how the conduct is allowed to continue.

Today, half of that question has been answered. That particular passage, although characteristic of the antics of Thomas and Arpaio in general, referred specifically to their literally criminal political persecution of the, at the time, Presiding Criminal Judge of Maricopa County Superior Court, Gary Donahoe. Notably, the Arizona Supreme Court Disciplinary Board today found, by clear and convincing evidence, that Thomas and Aubuchon were guilty of all of the charges surrounding the persecution of Judge Donohoe I described back in 2009.

And, indeed, the evidence against Andrew Thomas was damning beyond belief. It is hard to believe that even a criminal jury, with a “beyond a reasonable doubt” standard, would not convict Thomas of analogous criminal charges.

Which leaves us with the question of what is the status of criminal charges against not just Andrew Thomas, but his partner in all this, Sheriff Joe Arpaio? Well, that is indeed a better question. As the ABA Journal reported earlier this month:

A federal grand jury is more than three years into an investigation of far-reaching allegations of abuse of power and corruption against Thomas, Arpaio and a host of their associates and underlings. Any eventual charges likely would concern civil rights violations, criminal racketeering or both. And FBI agents occasionally attended the Thomas hearings—as they had those for Aubuchon’s merit system challenge to her firing in 2010 after her boss left—and can access the videos online for free discovery.

Read the full American Bar Association in depth report on Thomas, Arpaio and their alleged criminal sins, it is a tour de force.

And the ABA report is entirely consistent with the local scuttlebutt in Maricopa County, although it does appear said investigation, being led by the US Attorney’s Office for the District of Arizona, has been slowed down by the resignation of Arizona’s US Attorney, Dennis Burke, at the end of last August due to the Fast & Furious scandal. Burke, as an acolyte of Janet Napolitano, had little, if any, love for Arpaio and Thomas. My guess is the turmoil in the office from Burke’s resignation, and Criminal Chief Patrick Cunningham’s resignation, at the end of January for similar reasons, is precisely what has drug the Arpaio/Thomas criminal investigation out for so long.

As the “clear and convincing” findings of the Arizona Supreme Court, and resounding disbarment of Andrew Thomas and his key deputy, today have borne out, the case against Thomas and Arpaio is extremely strong. The Obama Department of Justice is pursuing a slow roll civil case via Tom Perez and the Civil Rights Division. But will the Obama Administration and DOJ follow through with actual criminal charges from their three plus year long grand jury probe, or will they chicken out and demur because they have a newly pending nominee for the US Attorney position in Phoenix?

The new Obama nominee for Arizona US Attorney, John Leonardo, is old, and very law and order centrist in nature. There is only one reason Barack Obama and his administration would nominate him for the post, as opposed to grooming desperately needed future Arizona political talent, as is customary from both parties with US Attorney slots – the Obama Administration has no fight for an actual liberal nominee of future value. So, the question of whether there exists sufficient balls within the Obama Administration, and its politically respondent DOJ, to go after Joe Arpaio and Andrew Thomas, especially with an election upcoming, is a very good one.

What say you Obama/Holder DOJ? The Arizona Supreme Court has, today, laid out an immutable case against Andrew Thomas; Joe Arpaio would have suffered a similar fate if he possessed a law license in Arizona. The facts are on the table, where are the indictments?