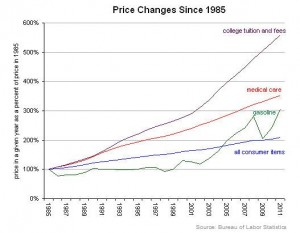 Since 1985, decreased funding of state universities has forced tuition to increase six-fold while consumer prices only doubled. (Bureau of Labor Statistics data via Economix blog.)

Back in early March, Catherine Rampell wrote in the New York Times about the ongoing trend since the mid 1980’s to cut state funding for higher education, noting that it has led to cutbacks in some of the very few areas of instruction where graduates actually face better employment prospects. She put up a companion piece at the Times’ Economix blog, where she was even more explicit about how it is the refusal by state legislatures to adequately fund higher education that is leading to the current problem of decreasing educational offerings despite skyrocketing tuition costs:

But at least at public colleges and universities — which enroll three out of every four American college students — the main cause of tuition growth has been huge state funding cuts.

There was quite a Twitter kerfluffle last week over the funding situation at the University of Florida, when it was claimed that Computer Science was being shut down while funds were being shifted to the athletic department. That was wrong on both counts, as the University is still struggling with how Computer Science will be organized, but it is not going away. Rather than taking money from academics, PolitiFact explains that the Athletic Association, which is a separate nonprofit, has given back over $60 million to the University since 1991 for academic use.

Unfortunately, that story obscured the real news on higher education in Florida, when Governor Rick Scott vetoed a bill that had passed the Florida legislature with a huge bipartisan majority, giving the University of Florida and Florida State University the ability to bypass the 15% per year limit on tuition increases in order to make up a larger portion of the huge cuts in state funding for higher education in this year’s budget:

The veto comes at a tense time, with universities bracing for a painful state budget cut for the fifth year in a row. This year, the total cut to the system is $300 million.

FSU President Eric Barron wanted to use the money to bolster FSU’s programs in science, technology, engineering and math, or STEM.

It appears that Scott may finally have gone too far, because even Republicans are now seeing the folly of cutting funding for higher education:

The quality of Florida’s state universities is bound to erode due to spending cuts and a veto of a proposal to allow steeper tuition increases at two schools, the House Education Committee’s chairman said Thursday at a meeting of the Higher Education Coordinating Council.

Rep. Bill Proctor, though, urged the schools to put the veto aside and set funding priorities that match their diverse missions.

“That’s certainly his prerogative, but at some point we are going to have to address how we’re going to fund the state universities and, of course, the community and state colleges,” Proctor said. “At some point, if not now already, our quality is going to begin to erode. It’s inevitable. It can’t be helped.”

He also noted the University of Florida is the only state school that’s a member of the prestigious Association of American Universities compared to six of California’s public universities.

The funding situation in California is just as dire as in Florida. In today’s Los Angeles Times, we learn that faculty in the California State University system have authorized a strike that could occur next fall. Because their primary issues are salary and class size, it is clear that this strike is a direct result of decreased funding for education:

The union representing California State University faculty announced Wednesday that its members have voted to authorize a two-day strike should negotiations over salary, class sizes and other issues continue to stall.

The vote could result in two-day rolling strikes at the 23 campuses, most likely beginning in the fall, according to the California Faculty Assn.

The Cal State system has raised tuition, offered fewer courses and turned away thousands of students because of budget cuts.

The union, which said faculty members haven’t received raises since 2007, is asking for 1% pay increases for each year of the new contract, more control over class sizes and greater stability for faculty with temporary contracts, among other proposals.

“The CSU faculty have run out of patience,” said union President Lillian Taiz, a history professor at Cal State Los Angeles. “It’s time to address seriously the issues before us so our faculty can get back to the business of providing quality education to the students of California.”

When even Florida Republicans are seeing the folly of reduced funding and college professors in California are reduced to threatening a strike because their salaries haven’t increased in five years, perhaps the national conversation will be able to move beyond Grover Norquist-think and actually contemplate restoring a meaningful level of investment in higher education.