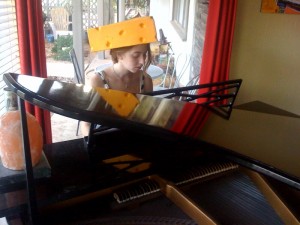 It is Labor Day weekend. Shockingly, my dictation program, Nuance Dictate for Mac, has gone beyond its normal complete worthlessness and now exists in the temporal-intellectual worthlessness of time and space. Seriously, for an application that claims to be useful for efficiency for the normal human, they are total crap. I have fought with them for nearly four years, and I am tired. You want to talk to me Nuance, here I am. Otherwise, go blow a goat.

Okay, now that I have gotten a little preliminary issue setting out of the way, let us get down to Trash Talk mofo’s and……

Oooops! Major power outage at Casa de bmaz! Seriously, I have dick for connection, only 3G on my old iPhone (yes, I have been holding out for iPhone5, even my wife is about to kill me).

I am sorry, I Musta Got Lost. And my gmail tells me Marcy is on the warpath. Rightly so, despite monsoon season here. Oddly, the sky looks mostly clear, I have no reason why my AC, much less my DC, has been taken away from me. You laugh, but when it is 106, you need the juice for the air conditioner. Bad. Somewhere below is a picture of the only light there was for a while, the moon. Vaya con dios Neil Armstrong, I thought well of you in the face of the moon tonight. If there was a measure of the childhood of my generation, it was the Moon Shot.

More Trash content will be on the horizon, like the storm front closing in, but not yet here. In the meantime, I am going to buy you all off with the evidence of my entertainment while I had no electricity. When you suddenly have no cable, no internet, no McIntosh, Adcom and B&W stereo; you have to make do. My daughter Jenna is providing the entertainment while all things I know are down.

UPDATE: Okay, I am back for a little bit. Man, lot of no power tonight and during, and after, then there was the tequila issue. What is a poor boy to do? Sing for a rock n’ roll band?

Okay, South Carolina and Michigan State, both closer than expected but not so by me, both won to start the college football season. Nobody should take anything away from Vanderbilt nor Boise State though. Especially Boise. Sparty is good, and at home to open the season? The BCS should never, ever, dock Boise State because they do not try to play a difficult enough schedule. Previously they opened against the Oregon Ducks in Corvallis. Tell me again why they cannot play for a national championship?

But now, the most interesting game of the first weekend is on tap. Yep, the Wolvereenies versus Crimson Tide at JerryJonesBowl. I’ll take Denard Robinson, seen below in a stirring segment, in an upset over the NickSabanDroids. Granted, I am completely sloshed and sitting on my front patio in a cactus patch, but that is my Karl Rove’s Fathers’ Solid Gold Cock Ring Lead Pipe Lock prediction. [All legal disclaimers imaginable applicable]. But wait! There is more! If you call right now we will double the offer! [Okay, not really]. 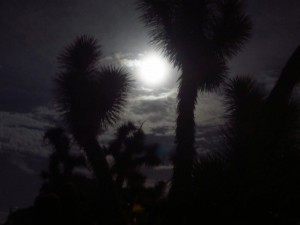 The NFL has played the 4th and final preseason game, the one season ticket holders pay for, but that nobody understands, already. The Jets, Jets, Jets finally scored a touchdown. Yes that is one. But “yay”. There are interesting things going on in baseball, but the best is the return of the Rocket. Even if it is for the Skeeters. These are the young Pujols’s of the next generation and, through four innings, they can’t hit Rocket. Think the jurors from the trial and Reggie Walton are not watching the Rocket? Oh yeah, you bet your butt they are. Clemens will likely throw one more independent league game, likely against the Long Island Ueckers (not really; that was a little high and outside). And then a start for the Astros. Maybe two. Just cause.

But, far more globally important than football, baseball or that nimrod NASCAR, the Circus is coming back to town. Yep, Formula One. And where the spinning wheel stops is…..at Spa! Yes, the circuit that looks like a woman’s reproductive system. Or a Phaser. Whatever. Unlike those candy asses in left turn NASCARland, they run in the wet in F1.

Yes they do and it is wet at Francorchamps. Qualifying will go off not too long after I post this, and the race coverage o Speed TV begins at 7:30am EST and 4:30am PST on Sunday morning. Despite the safetied up new course at Spa, with a bit of wet, it is still a fast, dangerous and interesting layout. Ought to be fun.

There are certain people that have covered F1 forever. One of the best photographers, Paul Henri-Cahier, has been, and is, a friend to this blog. Paul is the, without question, premier F1 photographer in the world and he is second to his father, the legendary Bernard Cahier.Grand Prix does not get the attention it should here in the States. But one who does cover it up close and personal on track is Brad Spurgeon. Here is Brad’s setup for this weekend: 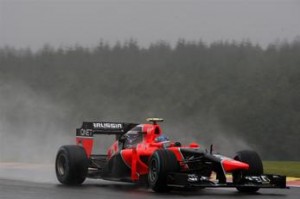 Formula One began the second part of its season after the long, five week summer break in August, with the practice sessions on Friday at the Spa-Francorchamps circuit in Belgium.

But thanks to the typical Spa weather, and unfortunately for the thousands of spectators who showed up to take a €400 shower, it was as if the holidays had never ended.

The cars may have managed to turn a few laps in the rain in the morning session — although only one car went out during the entire first half of the 1 hour and 30 minute session — but there was no track action at all in the afternoon session until 35 minutes of the same length session remained. And even then, six of the 22 drivers did not take to the track, and of those who did, none drove more than four laps.

Yep. Summer break is over, and it is time to go to Ardennes forest with the lads. With the wet in the picture, Spa will be special.

So, there is Trash Talk for this week. Marcy is probably gonna come along and yammer about Nate Ebner and whatnot. I got one question though. Picture Walt Kowalski talking to an Ikea chair: Should the Cardinals pick up and immediately start Brian Hoyer? Bonus question: Do Watertiger’s precious Jets need Hoyer even worse than the Cardinals?