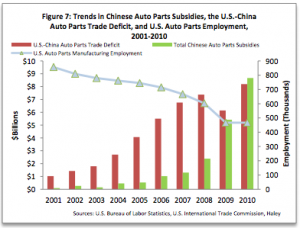 Back in January, the Alliance for American Manufacturing released a report showing that as China has provided billions in subsidies for auto parts manufacturing, US jobs in that segment have been declining. In March, a bunch of (mostly Democratic) members of Congress wrote a letter demanding the Administration do something about China’s unfair trade.

It’s one of a series of trade actions the Administration has taken (and just in time for election season!).

I worry, though, that this particular complaint is too little too late (though George Bush bears most of the blame). Even if parts manufacturers started leaving China because of this (a lot will remain because China often closes its own markets to parts unless you manufacture domestically), I suspect they’d come back to Mexico, not the US.

All that said, as Obama’s WTO disputes get more and more general, it may well bring people to realize what a myth this whole free trade thing has been all these years, that American workers are losing their jobs because other countries make sure they create jobs.

Update: Former Bush econ flack Tony Fratto points to something else that may come out of this.

The owner of 500 million shares of $GM is accusing China of subsidizing its auto industry.

In past disputes, China has threatened to look at ways we subsidize our manufacturing industry. This one may well cause them to do that (though with Chinese investment, for example, in subsidy recipient A123, they might prefer to profit of our subsidies).