One By Land If None By Sea?

Interstingly, at the end,  the AP article does get around to pointing out that the US eventually changed its story on the RQ-170 [and see the update below the fold]:

In 2011, Iran claimed it brought down a CIA spy drone after it entered Iranian airspace from Iran’s eastern borders with Afghanistan and Pakistan. The RQ-170 Sentinel drone, which is equipped with stealth technology, was captured almost intact. Tehran later said it recovered data from the top-secret drone.

In the case of the Sentinel, after initially saying only that a drone had been lost near the Afghan-Iran border, American officials eventually confirmed the plane was monitoring Iran’s military and nuclear facilities. Washington asked for it back but Iran refused, and instead released photos of Iranian officials studying the aircraft.

I think we are on the way to another reversal of this type from the US. If you clicked on the ScanEagle link above, and as you can see from the PressTV footage, this drone has only a ten foot wingspan. Ships are not the only launching platform. In fact, the Australian ABC News network just posted this US Defense Department photo of a ScanEagle launch from the desert: 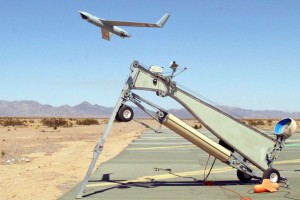 It would appear that we need to hear from more agencies than just the Navy on whether any ScanEagles are missing. The Navy spokesman appears to be claiming that no US drones are missing, but it seems likely that if it is proven that Iran captured a drone this week, his statement will be said to have applied to Navy drones only and that the captured drone was launched by another agency, unknown to the Navy when the spokesman’s remarks were prepared.

Update: I was away for several hours, but it looks like I was on the right track about the dissembling on only Navy drones being accounted for. The New York Times put this story up a couple of hours after mine:

A spokesman for the United States Navy in Bahrain denied the Iranian claim, saying that no American drones were missing.

“The U.S. Navy has fully accounted for all unmanned air vehicles operating in the Middle East region,” a spokesman for the United States Naval Forces Central Command in Bahrain told Reuters. “Our operations in the gulf are confined to internationally recognized water and airspace. We have no record that we have lost any ScanEagles recently.”

However, the drone could have been one used by the Central Intelligence Agency, or even the National Security Agency, which both have eyes on Iran. Several kingdoms of the Persian Gulf also have ScanEagle drones.

And then a couple more hours later, AP updated their story so that it now reads:

Cmdr. Jason Salata, a spokesman for the U.S. Navy’s 5th Fleet in Bahrain, said there are no Navy drones missing in the Middle East.

“The U.S. Navy has fully accounted for all unmanned air vehicles operating in the Middle East region,” said Salata. “Our operations in the Gulf are confined to internationally recognized waters and airspace.”

Yup. We know where the Navy drones are, but whether other “agencies” may be missing a ScanEagle is another question entirely.