We have been discussing the FBI’s apparent inability to use the multiple images of the Tsarnaev brothers from the Boston Marathon to ID them using facial recognition software.

So I wanted to circle back to two things. First, point to the passage of BoGlo’s comprehensive account of the hunt for the brothers that pertains to this question.

Of note, it says photo analysts had isolated the video of Dzhokhar dropping his backpack by Wednesday morning.

When Alben, of the State Police, saw the results of the analysts’ work on Wednesday morning, he couldn’t believe it: they had captured an image of the young man in a white hat dropping a backpack outside the Forum restaurant and then walking away.

“There was a eureka moment . . . It was right there for you to see,” said the colonel. “It was quite clear to me we had a breakthrough in the case.”

They had faces. Now they needed names.

The account remains unclear about why the FBI was unable to match the images, relying on speculation about the quality of the images.

Even after authorities isolated the images of the two suspected bombers, they weren’t able to pinpoint the suspects’ identities — an essential puzzle piece that was still missing Wednesday.

The FBI has poured millions of dollars into facial recognition technology over the years so it can quickly cross-check an image against millions of other pictures in government databases.

In this case, both brothers were already in existing government databases, including the Massachusetts Registry of Motor Vehicles and federal immigration records. They were legal immigrants from the former Soviet republic of Kyrgyzstan, in theory allowing the FBI to find their names.

But it’s not clear which databases the FBI checked. And it may not have mattered. The pictures, taken from surveillance cameras above street level, were likely far too grainy when zoomed in on the brothers’ faces. And the older brother was wearing sunglasses, making their task even harder.

In addition, unlike in a traditional mug shot, the camera wasn’t looking at their faces head-on.

And in the middle of this account, BoGlo suggests that briefing Deval Patrick about being able to ID the face of the suspect led directly to the mistaken press reports — based on solid sources, the outlets insisted at the time — that authorities were ready to arrest a suspect.

Colonel Alben, the State Police chief, briefed Patrick on Wednesday about the key piece of video showing Dzhokhar abandoning his backpack. Alben described the clip and showed the governor photographs culled from the footage, information that Patrick called “chilling.”

“We have a break,” Patrick remembers him saying. “We think we have a face.”

If further proof was needed that the city was on edge, the anxiety soon spilled over into view. By 1 p.m., news reports began surfacing that a suspect had been not only identified but arrested, and was headed to the federal courthouse.

I’m still not satisfied with this explanation (and do hope Congress does some hearings on why facial recognition software failed to fulfill its promise, if in fact it did). But it does seem to suggest the FBI had solid images of the brothers for 18 hours before they released them to the public (a decision made by the FBI, the BoGlo reports) and set off the manhunt that shut down the city.

Also, remember our questions about Ray Kelly’s boast of having pictures of the Dzhokhar in Times Square, as the law enforcement community tried to use a half-baked plan to escape to New York and set off pressure cooker bombs in Times Square?

It appears from the coverage that the pictures derived not from NYC’s ring of steel, but from the picture Dzhokhar put on Vkontakte. CBS national makes that explicit, and this image from CBS local admits the picture is a personal one. 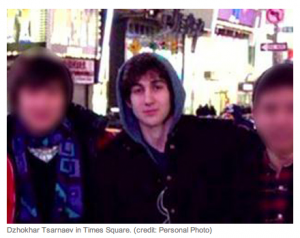 The NYDN, in a story I won’t link because of the way it identifies potentially innocent friends of Dzhokhar’s who have been detained for visa violations, uses the same image.

In other words, Ray Kelly’s Ring of Steel is no match for Dzhokhar’s own (Russian) Facebook page, along with his Twitter account that described another trip to NYC.

Granted, fully-trained terrorists wouldn’t be so sloppy with their social media use as this kid recruited by his brother just before the attack.

But in this instance, Facebook appears to have been just as important a surveillance tool as all the private videos that gave pictures, but reportedly not the ID, of the brothers.

Update: I meant to mention this bit from the BoGlo article, too.

The global positioning system on the vehicle, which emitted tiny traceable electronic signals, showed that the Mercedes was less than 5 miles from their apartment – and heading Reynolds’s way.

It suggests, as I’ve wondered about repeatedly, that it was the Mercedes’ location device, not the hostage’s phone, that alerted the cops to where the SUV was.