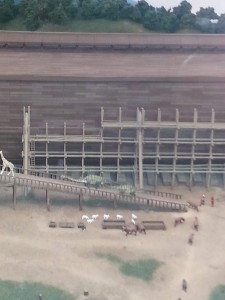 The Noah’s Ark Amusement Park plan may collapse by February because of funding woes.

A Kentucky theme park to be built around a full-scale replica of Noah’s Ark may sink unless investors purchase about $29 million in unrated municipal bonds by Feb. 6.

The northern Kentucky city of Williamstown in December issued taxable debt for affiliates of Answers in Genesis, a Christian nonprofit, data compiled by Bloomberg show.

Even though $26.5 million of securities have been sold, the project needs to sell at least $55 million in total to avoid triggering a redemption of all the bonds, Ken Ham, the nonprofit’s president, said in an e-mail to supporters yesterday. Without the proceeds, construction funding will fall short, he said.

“We still need those Ark supporters who weren’t able to purchase the Ark bonds at closing to prayerfully consider participating in a secondary bond delivery at the level they had indicated to us,” Ham said. “Will you please step out in faith with us?”

I find the possibility that Noah’s Ark may go unfunded remarkable, given one of my favorite details from the affiliated Creation Museum.

As the picture above shows, the Creation people believe the dinosaurs marched onto the Ark along with all the other 2-by-2s. Somehow, that helps them prove the dinosaurs were killed in the Flood rather than killed off by natural selection or a meteor or climate change.*

But once you’ve got dinosaurs (and giraffes) on the Ark, you create another problem: the Ark must be veryvery big. I forget how big they said it was, but it was veryvery big (510 feet? That wouldn’t fit dinosaurs!). 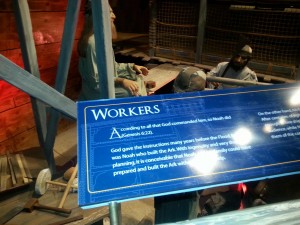 And that creates another problem.

How did Noah and his family build such a veryvery big Ark by themselves?

One exhibit provides some possible answers, but doesn’t claim to know. God gave advance warning to Noah, you see, so maybe he and his sons really did build such a veryvery big Ark by themselves.

With ingenuity and very thorough planning, it is conceivable that Noah and his family could have built the ark without any help.

The exhibit went to the trouble of inventing another possible solution, complete with mannequins depicting it: labor.

On the other hand, his family did not have to build the ark alone. After centuries of righteous living, Noah may have been wealthy enough to hire shipbuilders. Paid workers may have been his audience, while Noah, a “preacher of righteousness,” warned them of the coming judgment. [my emphasis]

The Creation people didn’t consider another likely solution, if Noah had help, which is that he had slaves. Perhaps they didn’t consider it because it would conflict with another explanation the Museum offers, that only a distorted view of the Bible would justify slavery (implying too that the many societies that enslaved in the name of Christianity have nothing to do with the nice Creation people).

But even if Noah actually paid his workers, it seems, he would have been the kind of boss who lets his employees slave over building a veryvery big Ark for months and years, but then leaves them to die in a massive Flood right after they’ve built it.

You know? A “righteous” employer.

The other thing we learn from this exhibit, of course, is that righteous people get the money they need to build their Arks.