I noted last month that Verizon released its transparency report before the Tech Company transparency deal, which gave it a way to avoid revealing this embarrassing detail:

Had Verizon released a transparency report yesterday, it would have added at least the following two details:

? orders affecting ? selectors (probably measuring the number of search terms — maybe something like “250″ — Verizon searches for off its upstream collection affecting millions of people)

It would have painted a very different picture.

Here’s how it communicated to its customers that it provides all their call records and sucks up Internet data off its switches using search terms. 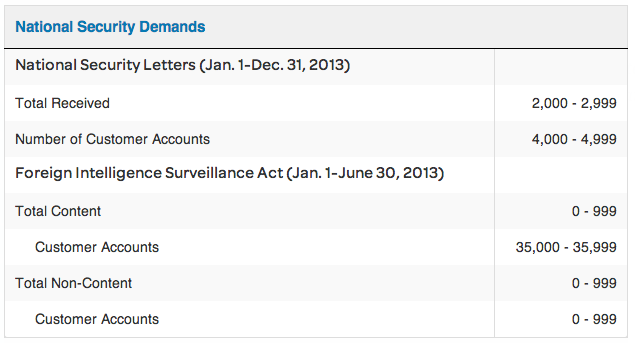 You see, it’s supposed to reveal all of its FISA Court orders, not just the orders it gets under the Foreign Intelligence Surveillance Act, which is a different thing. While the number of non-content orders might still be quite small: just 4 orders, presumably, plus some exotic ones thrown in. The number of customer accounts affected would be “all.”

Moreover, in the content section, AT&T is supposed to describe “customer selectors.” This is different than accounts, because, in AT&T’s case, it also includes the number of search terms is sucks right off the circuits (which affects millions of accounts).

Congratulations, AT&T, you have demonstrated definitively these transparency guidelines are not about transparency at all.