I’ve been meaning to return to coverage of the re-release of the DOJ IG Reports on Section 215 liberated by Charlie Savage just before Christmas. I’ve been seeing a lot of focus on posts like this which “report” that FBI used NSLs to get data the FISA Court would not approve under Section 215 for First Amendment reasons. Such a focus drives me batshit for 3 reasons:

As I noted (and as most outlets seem to have missed) these two reports are re-releases of old DOJ IG reports, part of a series of re-released reports in response to a Charlie Savage lawsuit. And while this release is not quite so bad as the previous release — in which FBI actually reclassified previously public words!  — there’s still very little that’s new. In addition to the phone dragnet appendix we’ve all been waiting for (which I wrote about here), the most significant newly released material pertains to how FBI shares Section 215 information with foreign governments (including the declassification of descriptions of that use, as on page 27, 29). The most interesting new material may be a reference on page 20 that reveals OIPR only temporarily stopped using combination orders in 2006 after the passage of the PATRIOT Reauthorization. This suggests they may have resumed using them to get location data, as I laid out here(and as clearly admitted by James Cole here).

But that’s, for the most part, it. There are only words here or there that are newly released.

Not only was the NSL-replacing-a-215-request not new, but there were congressional hearings on it when the report initially got released.

Indeed if you compare this passage from the original 2008 release: 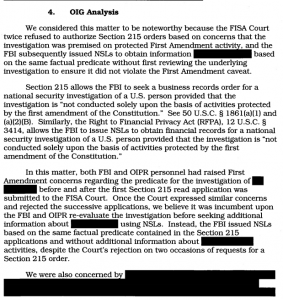 With the same passage from the re-release:

You can see that the revelation about the use of an NSL where the court had already rejected a Section 215 order has not changed (there are a few new words revealed elsewhere).

It seems the lesson we should take from this new release is precisely the same I took from the last one: this is ridiculous! We’ve been talking non-stop about Section 215 for 18 months, and yet all that discussion hasn’t led to anything but foreign sharing and a brief appendix to be released?

There are actual, current problems with NSL practice to be more concerned about

The focus on problems with an individual Section 215/NSL years ago distracts from ongoing problems with NSLs revealed in the DOJ IG Report released earlier this year.

That is, it seems FBI is still doing funky things with its NSLs, but doing a better job of hiding it all, even from Congress.

Want to do some reporting on NSL outrages? Try reporting on current practice, not rehashing stuff that happened 8 years ago.

Then there’s the matter of the current DOJ IG Report on Section 215 — a report that has been pending (by my rough count) for 1,663 days, or over 4.5 years. DOJ IG finished it months and months ago, but FBI and other Intelligence Community members have been stalling its release in a classification review. Given that DOJ’s IG said in December 2013 that how much he could release with this report depended on how much FBI declassified from all his office’s previous reports, and given that they’re not substantially declassifying anything more, it seems they’re trying to bury a report on a program under current debate by classification.

That we’re waiting for such an old report means we’re still waiting on detailed reporting from 2009, the year of the big Section 215 violations. It means we’ve got no independent assessment of how FBI is currently using Section 215 (besides the phone dragnet).

Moreover, I all but guarantee you that report will focus on two issues — FBI’s outright refusal to follow PATRIOT Reauthorization law as passed in 2006 and adopt minimization procedures for Section 215 use, as well as an assessment of request approval times (which should impact any consideration of an emergency request provision) — that are absolutely central to discussions of USA Freedom Act. While limited members of Congress have been briefed on the report (which is probably where the minimization procedures — which are not necessarily even as stringent as what FISC already imposes — in USAF came from), it has not been made public that FBI has basically contemptuously refused to follow the law for 8 years now. It has not been made public that in the face of FBI refusing to follow Congress’ bidding, Congress instead would adopt weak tea minimization procedures in USAF that don’t do what the original law required — limit the retention and dissemination of Personally Identifyiable Information.

Perhaps I’m a bad judge here, because I’ve been patiently waiting for this report for so long. But it seems the failures to finish and publicly release this report exemplify FBI’s refusal to put order to and have oversight on its terrorism tools. It reflects a systemic problem that goes beyond an improper request back in 2006.