Distribution of Income By The Plutocracy

I’ve written a pair of posts at Naked Capitalism on the neoclassical theory of marginal productivity as an explanation for the distribution of income in our neoliberal market economy. The first is based on Thomas Piketty’s Capital in the Twenty-First Century, and examines the bloated pay of top management. The second focuses on pay for the rest of us, based on the discussion of Paul Samuelson and William Nordhaus in their introductory textbook Economics (2005 ed.).

The second post points out that John Bates Clark, who dreamed up this theory around 1900, said that it is based on the natural law. In other words, the distributions it supports are morally just. People want to believe the “market” pays them fairly, and the theory comports with the Invisible Hand mumbo-jumbo they also believe, so they buy into it despite overwhelming evidence to the contrary, including their own experience. Both posts suggest an alternative hypothesis, that incomes are distributed on the basis of power. So one good question might be: what is the basis for rewarding capital?

Here’s a brief description of the theory of marginal productivity advanced by Samuelson and Nordhaus, from the second link

… [T]hey define Marginal Revenue Product as the additional revenue produced by a unit of input of something (labor, steel, electricity, cash loans) while all other things are held constant. It is equal to the marginal revenue the firm gets from the sale of the additional output, if any, created by the additional unit. Hands are waved, and the authors tell us that the firm should add inputs of all kinds to the point that the marginal revenue product of the input is less than or equal to the cost of the input. Here’s a chart, Samuelson/Nordhaus at 238. 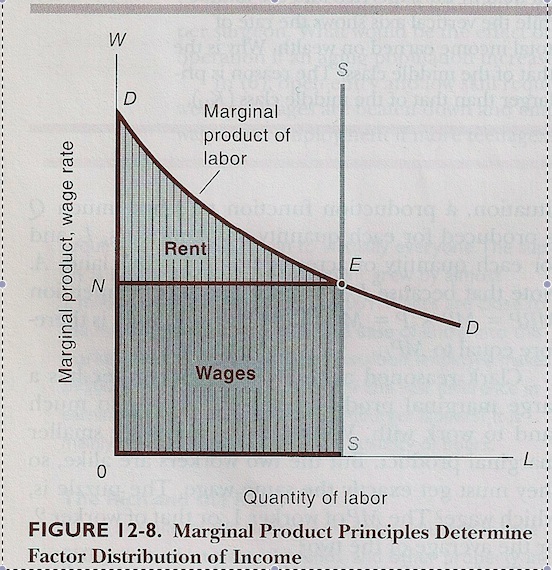 The authors explain that the rent triangle is equal to about 1/4 of wages, which “… reflects the fact that labor earnings constitute about three-quarters of national income.” Nice and simple. So then we calculate the supply and demand for the entire economy by adding up all the supply and demand curves of every firm. Then we have equilibrium at the point where the supply equals the demand. From here, it’s a short step to determining the distribution of money to wages. Samuelson and Nordhaus give us the model of John Bates Clark from 1900.

Under perfect competition, the answer is clear: Landlords will not hire a worker if the market wage exceeds that worker’s marginal product. So competition will ensure that all the workers receive a wage rate equal to the marginal product of the lat worker.

John Bates Clark was one of the important neoclassical economists. This is from a recent paper.

Clark is best known for his marginal productivity theory of distribution, which famously says that “the distribution of the income of society is controlled by a natural law, and that this law, if it worked without friction, would give to every agent of production the amount of wealth which that agent creates”. Labor’s wage, which Clark interchangeably calls “standard,” “normal,” “natural,” and “competitive,” is thus determined by the value of its marginal product (what Clark ordinarily terms “specific product”). Fn and refs. omitted.

Most of the rest of both posts is devoted to showing that the evidence doesn’t support this armchair speculation. Evidence is irrelevant, of course. People don’t want to believe they are being cheated by the capitalist system or by the rich, because that would violate their Secular Religion, US Constitutional Capitalism, to which all has capitulated, including their religious belief system and their belief in the rule of law and the Bill of Rights and so on. If people really thought that Constitutional Capitalism was totally corrupt, they might have to do something about it.

The explanation offered by Samuelson and Nordhaus for income distribution is worth another look. Here’s the caption in the text:

Each vertical slice represents the marginal product of that unit of labor. Total national output ODES is found by adding all the vertical slices of MP up to the total supply of labor at S.

The distribution of output is determined by marginal product principles. Total wages are the lower rectangle (equal to the wage rate ON times the quantity of labor OS). Land rents get the residual upper triangle NDE. 238.)

So, this chart is supposed to represent an entire societ. The wage portion is the wages that go to everyone from wildly overpaid CEO to the minimum wage home health care worker. That means it hides all of the changes among wage-earners. As this paper by Larry Mishel shows, that rectangle hides a huge change in allocation between the top earners and the rest of us. We are all familiar with charts like this one by Mishel: 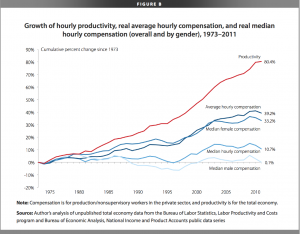 He estimates that about half of the gap between productivity and wages is accounted for by increases in incomes at the very top. That’s a convincing demonstration that power is the determinative issue in income distribution, not anything to do with “markets” or natural law. And it gives a clear idea of how much is hidden in the lower rectangle.

Now take another look at that Samuelson and Nordhaus chart. They say that the money in the triangle DEN belongs to landowners, as “rent”. Of course, since this is about the entire economy, it must be that this “land” is actually all capital, machines, factories, and natural resources, to the extent they are owned by some specific human being or Corporate Person. So why exactly does all of what the authors call excess marginal product go to the capitalists? “The reason is that each landlord is a participant in the competitive market for land and rents the land for its best price.” That doesn’t sound like a reason to me. It sounds like a pre-ordained conclusion.

In fact, as Mishel shows, the last 35 years have seen a reallocation of income between labor and capital. Mishel estimates that about 20% of the gap between productivity and wages is accounted for by increases in the share of national income going to capital. The balance is accounted for by faster increases in prices for goods purchased by consumers compared the prices of things they produce. Mishel calls this the “terms of trade”, and it accounts for a significant part of the variance. Mishel suggests that the gap may mean that higher productivity is not improving overall standards of living, and that further research is needed. I’d suggest that this gap ultimately goes to the capital owners and their highest paid employees.

We’re told this is all for the good, either on natural law grounds or because it’s efficient. The natural law thing is nothing but a veneer of philosophy over the greed of rich patrons. Efficiency is currently structured to prioritize the rich over the rest of us. As Mishel shows, the rich, both capitalists and top earners, are taking all of the gains from increased productivity for themselves, money that used to be distributed across the income spectrum. Why should I care at all about efficiency if the burdens fall on my back and the benefits all flow to a tiny number of Capitalist Aristos?