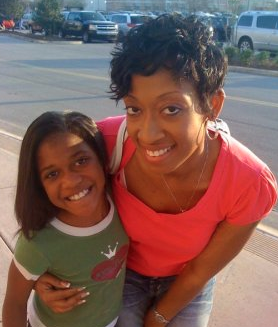 By now, you probably know the story of Marissa Alexander, a charming young woman who tried to defend herself and her children from a criminally abusive ex in Florida. Another soul outrageously and scandalously prosecuted by the, by all appearances, morally and ethically bereft Angela Corey, the state prosecutor in Florida’s 4th Judicial Circuit. Marissa was, finally, released from jail today pursuant to a forced plea agreement. Via Reuters:

A Florida woman who says she fired a warning shot at her abusive husband was released from a Jacksonville jail on Tuesday under a plea deal that capped her sentence to the three years she had already served.

Marissa Alexander, 34, was initially sentenced to 20 years in prison in 2012 but her conviction was later overturned. She faced another trial on charges that could have put her behind bars for 60 years before she agreed to a plea deal in November.
Her case helped to inspire a new state law permitting warning shots in some circumstances.

Leaving the courthouse, Alexander cried as she thanked her supporters, sharing plans to continue her education in order to work as a paralegal.

Ms. Alexander is indeed out of incarceration and home tonight, though she will still, pursuant to the plea she entered, have to serve two years on home confinement, starting from this date going forward. She appeared on Anderson Cooper’s “AC 360” tonight on CNN and looked simply radiant. I don’t normally get into red carpet like descriptions of people in legal cases I comment on, but in this case it really seems appropriate. She is quite a woman, and it is impossible not to be charmed by her, and wish her the very best.

But what I really come to write about is the commentary of Jeffrey Toobin, who was on after Marissa’s appearance to discuss the legal considerations with Cooper. Toobin was strident, unflinching, and spot on in what he said. So much so I nearly stood up and cheered. Instead, I made a transcript:

JT: I mean this is one of the most appalling examples of prosecutorial abuse I have ever seen. The harassment, the endless pursuit of this woman [Alexander] is just a blot on Florida, and our whole country.

AC: What makes it particularly, and why it captures so many people’s focus is during the George Zimmerman trial where obviously “stand your ground” was an issue, was raised, it seems it is a completely different interpretation of stand your ground.

JT: Well, that’s right. And I don’t know motive. I can’t tell you why Angela Corey pursued her so obsessively, and I…thinks it’s important to…all I know is what she did. All I know is what the facts are. The facts are that this woman had a very legitimate defense, this guy [Alexander’s ex] was a monster. He had a history of abuse of women, and that she [Alexander] would be pursued this way is just sickening.

AC: It is interesting, because the statute was amended subsequently basically to allow for warning shots and you wouldn’t necessarily be prosecuted for that, but it was not retroactive.

JT: Fortunately, this case has prompted a lot of outrage in Florida and around the country and that change in the law is one effect of this that was too late for her, too late to help her.

AC: It has to be such a gut wrenching decision, to decide to take a plea, to serve another 65 days in jail and then you get out, you have a record then, and you are under house arrest for another two years…or, maintain you innocence and risk another 60 years.

JT: It is a heartbreaking dilemma, but one thing tipped this case. You know, Angela Corey was not even negotiating, as far as I can tell, in good faith, but her lawyers, including Faith Gay of Quinn Emanuel, they were working pro bono on this case, they got a ruling from the trial judge that they could introduce evidence of all the abuse that Gray had imposed on other women…so that’s the trial setting that was going to happen.

Angela Corey is incompetent, vicious and a disgrace. Thank you Mr. Toobin, I could not possibly have said it better. As perfect as the description is, it may still be an understatement.

But, how did this come to be? How did Marissa Alexander face 20 years, get convicted, win an appeal, and come out of the appellate win only to face 60 years if she lost the retrial? Well, that is a subject that goes deeper than Jeff Toobin could really get into in a basic 3-4 minute cable TV hit.

Normally, a defendant such as Marissa Alexander might expect to be protected from such an escalation of sentence by the state’s attorney through the edicts of a case known as Blackledge v. Perry.

Blackledge v. Perry is a famous case known in criminal defense circles as the “upping the ante case”. Blackledge was convicted of a misdemeanor and appealed, which in North Carolina at the time meant he would get a new trial in a higher court. The state retaliated by filing the charge as a felony in the higher court, thus “upping the ante”. The Supreme Court in Blackledge held that to be impermissibly vindictive.

A prosecutor clearly has a considerable stake in discouraging convicted misdemeanants from appealing and thus obtaining a [new trial] in the Superior Court, since such an appeal will clearly require increased expenditures of prosecutorial resources. . . . And, if the prosecutor has the means readily at hand to discourage such appeals — by “upping the ante” through a felony indictment whenever a convicted misdemeanant pursues his statutory appellate remedy — the State can insure that only the most hardy defendants will brave the hazards of a [new] trial.

. . . A person convicted of an offense is entitled to pursue his statutory right to a trial . . ., without apprehension that the State will retaliate by substituting a more serious charge for the original one, thus subjecting him to a significantly increased potential period of incarceration.

So, Angela Corey impermissibly “upped the ante”, in violation of Blackledge, on Marissa Alexander when she sought 60 years imprisonment on Alexander upon retrial even though the sentence from the first trial was “only” 20 years, right? Unfortunately no.

You see, Corey did not up the number or nature of charges when charging the retrial, she alleged the same three counts, it is just that the law in Florida had changed, and Corey cravenly took advantage of it to unconscionably bludgeon Marissa Alexander.

Alexander, 33, was previously convicted in 2012 of three counts of aggravated assault with a deadly weapon and was sentenced to 20 years in prison by Circuit Judge James Daniel under the state’s 10-20-life law. Daniel actually imposed three separate 20-year sentences on Alexander but ordered that they be served concurrently, which meant Alexander would get out in 20 years.

The conviction was thrown out after the 1st District Court of Appeal in Tallahassee ruled that Daniel made a mistake in shifting the burden to Alexander to prove she was acting in self-defense. During jury instructions, Daniel said she must prove beyond a reasonable doubt that she was battered by her husband.
….
But Assistant State Attorney Richard Mantei, the lead prosecutor in the case, told the Times-Union his office was simply following the sentencing laws of the state of Florida.

The same appeals court that ordered Alexander’s retrial separately ruled last year that when a defendant is convicted of multiple counts under 10-20-life that arose from the same crime, judges must make the sentences consecutive and are not allowed to impose them concurrently.

The law has not changed since Alexander was sentenced in 2012, but courts throughout the state have been struggling to interpret what the Legislature meant when it passed sentencing laws regarding 10-20-life.

The Alexander case inspired the so-called “warning-shot” bill that will be part of the Florida legislative session that begins Tuesday. The proposal, which is expected to pass, would create an exception to the 10-20-life law and prohibit those who fire a warning shot from getting 20 years in prison.

So, it is, unfortunately, not really within the ambit of Blackledge. Which leaves us back where we started. Angela Corey. Corey was ridiculously aggressive in not affording Alexander, a victim herself, the benefit of the doubt on self defense, including the much misunderstood, and misdescribed, “stand your ground” provision.

With no protection from Blackledge and its progeny, and the curious ability of Marissa Alexander to be subject to the new “consecutive” provision in Florida’s 10-20-life gun laws, but not the new provisions on warning shots in stand your ground cases, this was the position Marissa Alexander found herself. Take a scandalous plea, the only one being offered by the contemptible Circuit Attorney Corey, or risk her children never seeing her out of custody in her natural lifetime. After seeing what Corey was willing to do, how could Alexander not take the deal?

But, make no mistake, the only reason that this situation got to where it did is out of the sheer evil avarice of a woman not fit to represent the people of Florida, nor the justice system in America. Angela Corey is a walking talking picture of injustice. Thanks again to Jeff Toobin for saying that so clearly. And, best wishes and godspeed to Marissa Alexander.