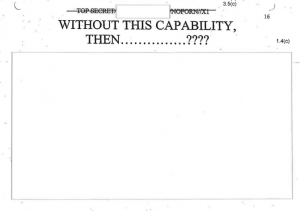 David Cole persists in reading some selected documents in isolation from a far more extensive record and patting himself on the back that he has discovered what many of us have been saying for years: that some in the White House were also responsible for torture. But along the way he entirely misses the point.

I will return to the documents that have so entranced Cole at a later time (several other issues are more pressing right now). But for now, here are some significant problems with his latest.

Cole once again presents the CIA Saved Lives site as some mysterious cache, in spite of the fairly clear genealogy and the WSJ op-ed signed by a bunch of people who managed torture introducing it.

The documents, which were uploaded to a mysterious website by the name of ciasavedlives.com, provide dramatic new details about the direct involvement of senior Bush administration officials in the CIA’s wrongs.

It’s as if Cole has never heard of PR and therefore absolves himself of presenting this as a fourth self-interested viewpoint, that of those who managed the torture — the other three being SSCI Dems plus McCain, SSCI Republicans, and official CIA — which doesn’t even encapsulate all the viewpoints that have been or should be represented in a complete understanding of the program.

And so Cole accepts that the narrative presented here is a transparent portrayal of the truth of the torture program rather than — just like the SSCI report, the CIA response, the CIA IG Report, the SASC Report, and the OPR Report — one narrative reflecting a viewpoint.

As a result, some of the conclusions Cole draws are just silly.

Back when his new CIA-friendly opinion was in its early stages at the NYT, Cole accepted as a fair critique (as do I) that Abu Zubaydah’s torture started well before the SSCI report considered, in April with his extreme sleep deprivation and not August when the waterboarding program started (if we can believe CIA records).

The committee contended that the most useful information from Mr. Zubaydah actually came while the F.B.I. was questioning him, using noncoercive tactics before he was waterboarded. But the C.I.A. points out that Mr. Zubaydah had been subjected to five days of sleep deprivation, a highly coercive and painful tactic, when the F.B.I. interrogated him.

I’d actually say — and Cole should, given that elsewhere in his NYT piece he admits we should also look at the torture done in foreign custody — that the timeline needs to come back still further, to Ibn Sheikh al-Libi’s torture in January and February 2002, using the very same techniques that would be used with Abu Zubaydah, in Egyptian custody but with CIA officers present (and, importantly, authorized by the same Presidential finding). But once you do that, Cole’s depiction of the original approval process for the program becomes nonsensical.

Even though the program had been approved at its outset by National Security Adviser Condoleezza Rice in July 2002 and by Attorney General John Ashcroft in August 2002,

Of course, all that points back to a place that Cole so studiously avoids it’s hard to imagine it’s not willful, to the September 17, 2001 Memorandum of Notification that CIA and SSCI both agree (though the CIAsavedlives leaves out) authorized this program. (President Obama also went to some length to hide it from 2009 to 2012, when he was busy using it to kill Anwar al-Awlaki.)

Condi didn’t give primary approval for this (and the record is not as clear as Cole claims in any case). President Bush did, months earlier, well before the February 7, 2002 date where CIAsavedlives starts its narrative. And that’s the detail from which the momentum endorsing torture builds (and the one that a Constitutional law professor like Cole might have far more productive input on than details that he appears to be unfamiliar with).

I’m not trying to protect Condi here — I believe I once lost a position I very much wanted because I hammered her role in torture when others didn’t. But I care about the facts, and there is no evidence I know (and plenty of evidence to the contrary) to believe that torture started with Condi (there is plenty of reason to believe CIA would like to implicate Condi, however).

Cole goes onto rehearse the three times CIA got White House officials to reauthorize torture, two of which were reported years and years ago (including some limited document releases) but which he seems to have newly discovered. In doing so, he simply takes these documents from the CIA — which has been shown to have manipulated documents about briefings in just about every case — on faith.

Dan Froomkin pointed out some of the problems with the documents — something which Cole has already thrown up his hands in helplessness to adjudicate.

The new documents don’t actually refute any of the Senate report’s conclusions — in fact, they include some whopper-filled slides that CIA officials showed at the White House.

But the slides also contained precisely the kind of statements that the Senate report showed were inaccurate:

While it doesn’t excuse White House actions, the CIA demonstrably lied about the efficacy of the program. It’s not that the White House was being told they were approving a torture program that had proven counterproductive. They were told, falsely, they were approving a program that was the one thing that could prevent another attack and that it had already saved lives. That is, the people approving the torture were weighing American lives against respecting Khalid Sheikh Mohammed’s human rights, based on inaccurate information. And note — as the image above shows — the torture managers aren’t revealing what implicit threats they made if Bush’s aides didn’t reapprove torture (though elsewhere they make it clear they said ending torture might cause “extensive” loss of life), which is significant given that the next year they claimed they had to torture to prevent election year plotting that turned out to be based partly on a fabrication.

Those aren’t the only known lies in the documents. Take the record of the July 29, 2003 briefing and accompanying slides. Among the whoppers — even according to CIA’s own documents! — that appear are:

The fact that the CIA misrepresented how many times both Abu Zubaydah and Khalid Sheikh Mohammed had been waterboarded is significant, because that’s also related to the dispute about whether Muller’s account of the meeting was accurate. According to John Ashcroft, Muller misrepresented his comments to mean that CIA could waterboard more than had been approved in the Techniques memo, whereas what he really said is that CIA could use the techniques approved in that memo with other detainees. This does not mean — contrary to Cole’s absurd insinuation — that “Ashcroft is my hero.” It means there is a public dispute on this issue. Cole has gone from refusing to adjudicate disputes to simply taking CIA’s word on faith, in spite of the well-documented problems — even based entirely on CIA’s own documents — with their own accounts of briefings they gave.

Note, too, that whether the Abu Zubaydah memo could be used with other detainees was being discussed in 2003, when even by CIA’s count it had already subjected 13 more detainees to torture, is itself telling.

Finally, the Legal Principles are worth special note. They were, per the CIA IG Report, the OPR Report, and declassified documents, one key tension behind this July 29, 2003 briefing. As the record shows, DOJ permitted CIA’s IG to develop the agency’s own fact set about the violations that had occurred by January 2003 to determine whether doing things like mock execution with Abd al Rahim al-Nashiri and killing Gul Rahman were crimes. So CIA set about writing up its own summary of Legal Principles DOJ had given it — it claimed to John Helgerson — with the help of John Yoo and Jennifer Koester (but not, at least according to Jack Goldsmith, the involvement of Jay Bybee or the review of other OLC lawyers, which would be consistent with other facts we know as well as Bybee’s sworn testimony to Congress). That is, CIA was basically writing its own law on torture via back channel to OLC. The record shows that on several occasions, CIA delivered those documents as a fait accompli, only to have DOJ lawyers object to either some provisions or the documents as a whole. The record also shows that CIA used the memos to expand on authorized techniques (something the DOD torture memo process in 2003 also did) to include some of the ones they had used but hadn’t been formally approved by DOJ. That is, one tension underlying this meeting that Cole doesn’t discuss is that some in DOJ were already trying to limit CIA’s own claims to authorization, which devolved in part to a debate over whether bureaucratic manipulation counts as approval.

I raise all this because it gets at the underlying tension, one which, I suspect, created a kind of momentum that doesn’t excuse those involved but probably explains it. Very early after 9/11, certain people at CIA and in the White House decided to affirmatively torture. Torture started — and the Iraq War was justified — early, long before Cole presents. But at each step, that momentum — that need to, at a minimum, protect not only those who had acted on the President’s orders but also the President himself — kept it going such that by 2004, CIA had an incentive to torture Janat Gul just for the sake of having an excuse to torture again (and having an excuse to get Jay Rockefeller to buy off on torture for what appears to have been the first time).

It’s that very same momentum — the need to protect those who tortured pursuant to a President’s order, as well as the office of the presidency itself — that prevents us from holding anyone accountable for torture now. Because ultimately it all comes down to the mutual embrace of complicity between the President and the CIA. That’s why we can’t move beyond torture and also why we can’t prevent it from happening again.

Cole and I agree that there are no heroes in the main part of the narrative (though there were people who deserve credit for slowing the momentum, and outside this main part of the narrative, there were, indeed, heroes, people who refused to participate in the torture who almost always paid a price). What he is absolutely incorrect about, given the public record he is apparently only now discovering, is that CIA did manipulate some in the White House and DOJ and Congress, to cover their ass. I don’t blame them, They had been ordered to torture by the President, and had good reason not to want to be left holding the bag, and as a result they engaged in serial fraud and by the end, crimes, to cover their collective asses. But the evidence is, contrary to Cole’s newly learned helplessness to investigate these issues, that CIA lied, not only lied but kept torturing to protect their earlier torture.

All that said, Cole’s intervention now is not only laughably credulous to the CIA. But it also is not the best use to which he could put his soapbox if his goal is to stop torture rather than do CIA’s bidding.

Just as importantly, though Cole has not mentioned it in any of his recent interventions here, what appears to have set the momentum on torture rolling (as well as the execution of an American citizen with no due process) is the abuse of covert operation authority. This is something that a prestigious Constitutional law professor might try to solve or at least raise the profile of. Can we, as a democracy, limit the Article II authority of the President to order people to break the law such that we can prevent torture?

Because if not, it doesn’t matter who we blame because we are helpless to prevent it from happening again.